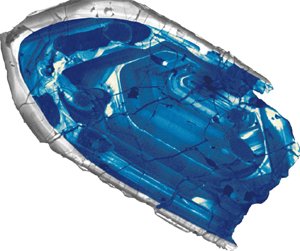 The zircon pictured here is from the Jack Hills region of Australia and supposedly confirms the earth is 4.4 billion years old.

Evolutionary scientists say they have confirmed that 4.4 billion years is the age of the earth’s earliest rocks. They arrived at this date using assumptions and interpretations of zircon crystals found in Australian sandstone.1 When examined, however, their conclusions are merely the top floor of an elaborate house of cards.

Zircon grains are found in rocks all over the earth. Scientists say they found one grain whose ancient core has been undisturbed since its formation.

Based on zircons’ crystallization temperature, scientists believe they originally crystallized in rock while the earth’s magma was cooling soon after the earth formed.

Upon this unobserved foundation, researchers built up a story leading to the formation of the sandstone, into which the zircons found their way. Their conclusions are based on four microscopic zircon crystals (of the hundreds they analyzed, they found only four that yielded dates older than 4.3 billion years).

The next three stories in this house of cards are the unverifiable assumptions of radiometric dating: that we can know the initial conditions, that we can be sure there was no contamination (for 4.4 billion years!), and that the radioactive decay rate has not changed.

The top floor of this shaky house is the researchers’ decision to rely on the dating of the zircon’s core, while discounting the fact that other parts of the same microscopic crystal gave wildly divergent dates—from 492 million years to 3.4 billion years. And to add a leaky roof to the wobbly edifice, they got an age of 5.5 billion years when they dated clusters of lead atoms in the crystal—but they promptly threw these dates out because they were “clearly” older than the earth.

What seems clear from the many different dates they yield is that these zircon crystals aren’t really frozen in time; and because of that, it is unrealistic to rely on any dates derived from them.

Evolutionary scientists claim zircon crystals can be accurate time clocks, but they discard any “time stamps” that don’t support their ancient timeline. Scripture, on the other hand, reveals the earth is young. God’s Word, the Bible, is the unchanging rock upon which we can interpret history.