Could “Equiterra” Ever Be Reality? 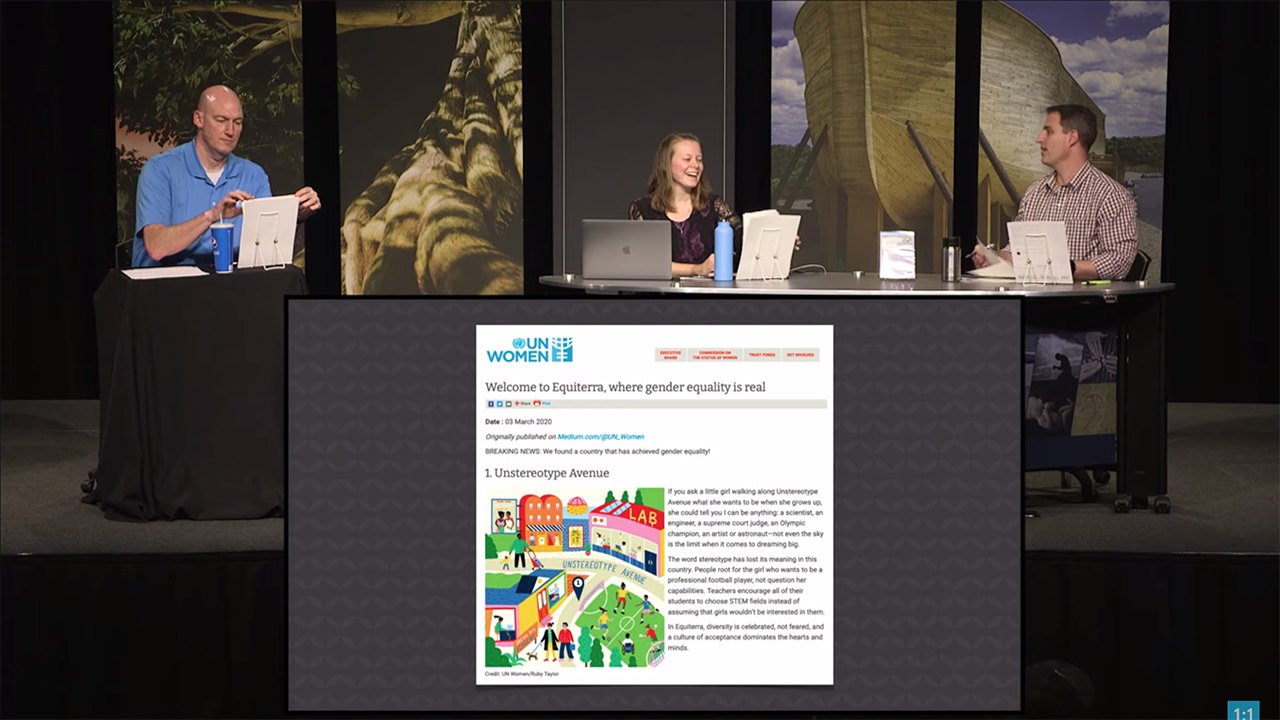 What’s “Equiterra”? Well, recently UN Women, a United Nations’ “entity dedicated to gender equality and the empowerment of women,” released an article featuring a map of a fictional country called “Equiterra, where gender equality is real.” In the capital, you can stroll down streets such as “Unstereotype Avenue” or “Violence Free Alley,” have a picnic in “Inclusion Square,” or drop by the “Toxic Masculinity Recycling Plant.”

There’s a lot that could be said about this ridiculous article and the ideology behind it. But I thought I would comment on the big picture idea represented by Equiterra. The idea behind it is that an idealistic utopia could be achieved by education, inclusion, equal rights, responsibilities, and opportunities, regardless of gender.

Ironically, at the same time, they believe in LGBT “inclusion,” which says there is no binary of male and female, so how can Equiterra ensure men and women are equally represented when there really is no such thing, in their view?

But by “education” they mean indoctrination so that every person thinks the same way. By “inclusion” they mean only those who think and believe the same as everyone else (Bible-believing Christians wouldn’t be welcome!). And by equal rights, responsibilities, and opportunities, they mean men and women need to be exactly equally represented in everything (which ignores how God has made men and women different). Ironically, at the same time, they believe in LGBT “inclusion,” which says there is no binary of male and female, so how can Equiterra ensure men and women are equally represented when there really is no such thing, in their view?

Equiterra—the idealistic utopia of UN Women—isn’t inclusive or equal. It’s a world where everyone thinks the same and believes the same—and what they think and believe runs contrary to God and his Word. They are slaves to sin. Ultimately, Equiterra fails at living up to its own name. But, they miss the fact that “all have sinned” (Romans 3:23) and “the heart of man is deceitful above all things and desperately wicked” (Jeremiah 17:9). Man is not neutral, for “every inclination of the human heart is evil from childhood” (Genesis 8:21).

Those who put this map together clearly want a world with less violence, more opportunity, and more “inclusion” (but only of certain people and the viewpoints they agree with), but they won’t find that in Equiterra. Such a country would be filled with sinners, just as our world is, and the veneer of peace and harmony would soon be disrupted by sin and its consequences. As many have said, we’ve seen George Orwell’s “1984” happening before our eyes.

The only true hope for individuals and the world is the truth of God’s Word and the gospel message. You see, if we want to properly understand the world around us, we must look to the history in God’s Word. We must understand that God created a perfect world, but it was ruined by Adam and Eve’s sin. We sinned in Adam—and we continue to sin, and our sin deserves death (Romans 6:23). But Jesus came and lived a perfect life, then he died in our place and took our penalty of death for us. When we repent and believe, we’re forgiven, cleansed of sin, set free from the bondage of sin, and given eternal life. While we are on earth, we will continue to fight sin as the Holy Spirit sanctifies us, but eventually a time is coming when God will create a new heavens and a new earth where sin and death will be no more.

Ultimate hope for now and for eternity is only found in one place—the gospel of Jesus Christ.

People yearn for “utopia” and work to try and achieve it here on earth. But, ultimately, it won’t ever be achieved by us. Ultimate hope for now and for eternity is only found in one place—the gospel of Jesus Christ.

There’s only one way to have true freedom:

So Jesus said to the Jews who had believed him, “If you abide in my word, you are truly my disciples, and you will know the truth, and the truth will set you free.” They answered him, “We are offspring of Abraham and have never been enslaved to anyone. How is it that you say, ‘You will become free’?” Jesus answered them, “Truly, truly, I say to you, everyone who practices sin is a slave to sin. The slave does not remain in the house forever; the son remains forever. So if the Son sets you free, you will be free indeed.” (John 8:31–36)

This item was discussed today on Answers News with cohosts Avery Foley, Bryan Osborne, and Tim Chaffey. Answers News is our twice-weekly news program filmed live before a studio audience here at the Creation Museum and broadcast on my Facebook page and the Answers in Genesis Facebook page. We also covered the following topics:

Watch the entire episode of Answers News for January 11, 2021.