The Problem of Evil

Numerous books have been written to try to explain what seems to be an irreconcilable problem—Christianity’s claim of a God of love in the face of the evil, death, suffering in this world.

How could a loving God allow it? Numerous books have been written to try to explain what seems on the surface to be an irreconcilable problem—Christianity’s claim of a God of love in the face of the evil, death, suffering and disease in this world.

Indeed, probably the major argument levelled against Christians goes something like this:

“How can there be an all-powerful loving God when we see children dying, people suffering, and bad things happening to good people? Surely such suffering and evil means that either He is not powerful enough to prevent it or He doesn’t want to, so He is not totally good.”

In reality, evil is actually a problem for the non-Christian—not the consistent Christian—but first we must understand the origin of evil in this world.

I was watching a TV news program about the flu epidemic across the USA. In an interview with a family who had lost a baby, the baby’s sister (about 10) asked, “Why us? Why did this happen to us?”

When bad things happen to Christians …

Shown here is the mangled wreck in which AiG’s Dr Carl Wieland was seriously injured in 1986. He lay trapped inside for 5.5 hours after a head-on collision at highway speeds with a fully laden fuel tanker in the Australian outback. 56 surgical operations followed over the next seven years. The book Walking through Shadows has details of his personal trauma, with fascinating and “different” insights into healing, and especially the powerful way in which his creation-based understanding of the Bible’s “big picture” made all the difference in how he coped. 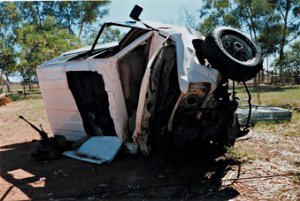 This unique book, which includes Ken Ham’s moving account of his brother’s progressive and fatal brain disease, has been of incredible help to countless Christians who are having trouble understanding their, or their loved ones’, suffering.

My heart went out to this grieving family. What would I say to them if I had the opportunity? I recalled the death of my younger brother over a year ago (see box, right). And yes, I still grieve, but at the same time, a correct understanding of the origin of death is important in dealing with such a tragedy.

The first man, Adam, represented the entire human race. When he sinned (rebelled against God, by disobeying His clear Word of instruction) he told God in essence that he wanted life without God. He (and thus we) wanted autonomy—to be independent of God.

Now if God gave us what we really asked for in Adam, we wouldn’t even exist, as He holds all things together by the power of His Word (Colossians 1:15–17). As a righteous God, He had to judge rebellion—He judged sin with death (spiritual and physical). God cursed the ground—the whole of creation now groans because of sin (Genesis 3:17–19, Romans 8:20–22).

God has obviously withdrawn some of His sustaining power, so that He does not uphold everything together perfectly as was the case before the Fall. Now everything groans—tends to run down or fall apart. We actually live in a world where we have a taste of what life is like without God—mutations, death, suffering, evil, etc.

However, when one understands the reason for death, suffering and evil in this world (by understanding the origin of such things as recorded in Genesis), one realizes it’s not God’s fault the world is this way, but our fault. And really, everyone suffers—everyone will die physically, not just that dear baby. What happened to that baby will happen to every one of us (unless the Lord returns before that time).

This helped me answer a question a pastor asked me at a conference. He said, “How do I answer people when they ask me, ‘Why would a loving God sentence people to a horrible place like Hell?’”

I discussed the origin of sin and death (as per my explanation above) and then said: “Pastor, do you realize that the question implies that it’s God’s fault people go to Hell?” I then continued, “When we correctly understand who we are (descendants of Adam), and about the Fall (origin of sin and death—the rebellion of mankind), then we should understand that it’s not God’s fault people go to Hell—after all, mankind had free will in the Garden before sin.1

“We (in Adam) separated ourselves from God—even though this was in His plan from eternity. We, in effect, told God we didn’t want Him. God is a righteous God, and thus had to judge sin—but in reality, we sentenced ourselves to Hell (eternal separation from God) by our own actions. Because, when each of us was conceived, we were already condemned as sinners because we were children of Adam. By God’s sovereign grace, He saves believers from the Hell we are destined for, and deserving of.”

I then said, “However, because God is an all-loving and all-powerful God, He provided a way for us not to go to Hell. He stepped into human history to become a man so that He could pay the penalty for our sin. He conquered death (through His Resurrection) and offers us His free gift of salvation. Our loving God, in essence, said, “Even though you don’t want me, I want you—I want to save you. I will pay your sins’ penalty and offer you free salvation.”

The Fall, as recorded in Genesis, explains the origin of evil, death and suffering in this world and enables us to correctly place the blame on ourselves.

Now, secondly, we need to reconcile how an all-powerful and all-loving God would allow evil, suffering and death (like the death of that precious baby) in this world. If God is powerful enough to overcome evil, and if He is all-loving—surely He would want to do this?

Jesus was challenging him to realize the implications of what he had said. Only an infinite being who is infinitely good should be called “good.”

If God is powerful enough to overcome evil, and if He is all-loving—surely He would want to do this?

The unbeliever does not, of course, accept that there is such a being. That means, however, that when he makes the claim that a loving, good God and persisting evil in this world cannot be reconciled, he has no way of defining “good”. What standard—what absolute authority—can he appeal to in determining what is “good” or “evil?”

If “good” is what gains public approval, then it is ultimately just an opinion. Without an absolute authority who has a right to determine “good” and “bad” (“right” and “wrong”), then what is “good” is just subjective. Who determines whose definition of “good” is correct, ultimately?

As Christian apologist Greg Bahnsen stated: “Philosophically speaking, the problem of evil turns out to be, therefore, a problem for the unbeliever himself. In order to use the argument from evil against the Christian worldview, he must first be able to show that his judgments about the existence of evil are meaningful—which is precisely what his unbelieving worldview is unable to do.”2

Thus, an unbeliever’s definitions of “good” and “evil” are subjective and his morality ultimately relative. So, logically, how can such a person make an accusation that the existence of a powerful and all-loving God is inconsistent with what this person determines is “evil” in this world?

Now an unbeliever might still claim that the paradox (of evil and an omnipotent, loving God) exists within the Christian worldview (where good and evil are real). However, there is a logical answer to this challenge.

Bahnsen continues, “If the Christian presupposes that God is perfectly and completely good—as Scripture requires us to do—then he is committed to evaluating everything within his experience in the light of that presupposition. Accordingly, when the Christian observes evil events or things in the world, he can, and should, retain consistency with his presupposition about God’s goodness by now inferring that God has a morally good reason for the evil that exists. God certainly must be all-powerful in order to be God; He is not to be thought of as overwhelmed or stymied by evil in the universe. And God is surely good, the Christian will profess—so any evil we find must be compatible with God’s goodness. This is just to say that God has planned evil events for reasons which are morally commendable and good.”3

The events of the crucifixion were evil—but for a morally good purpose—the salvation of man. “This man was handed over to you by God’s set purpose and foreknowledge; and you, with the help of wicked men, put him to death by nailing him to the cross. But God raised him from the dead, freeing him from the agony of death, because it was impossible for death to keep its hold on him” (Acts 2:23–24).

There are many other events in the Bible we can now look back upon and understand their morally good purpose. But at the time they didn’t make sense to fallible humans, given that God is all-loving and powerful (Romans 8:28).

Job’s suffering at the time seemed irreconcilable with a loving God (just as the death of that precious baby mentioned above seems to be). However, not only did God remind Job that he (Job) hadn’t always been there (humans are not omnitemporal) and didn’t know everything (humans are not omniscient), God commended Job for his faith. And Job learned that there was much more behind what happened to him for a morally good reason that would teach important lessons to millions of people through the ages. Death is properly called the “last enemy” in the Bible (1 Corinthians 15:26).

But in a strange way, in the context of the Fall, it is also a blessing for mankind, ultimately—since without it, humanity would have had no way of reconciliation with God, and we would all have remained separated from God for eternity.