Our mission is to equip people to stand on the authority of the Word of God and to understand the Bible’s answers to the problems that perplex individuals and plague our world.

Answers in Genesis exists to do just what the name implies: give answers from the Bible and real science. Our mission is to equip people to stand on the authority of the Word of God and to understand the Bible’s answers to the problems that perplex individuals and plague our world.

The importance of this ministry was driven home to me with the recent passing of Steve Jobs. You see, I’m a “Mac.” I love everything Apple produces. Just see the photo of me and my Apple resources below. 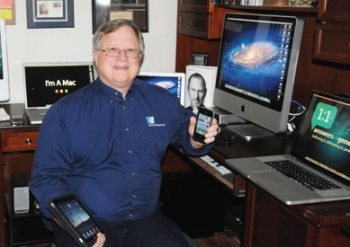 I write articles such as this on an iMac, I do presentations on a MacBook Pro, and I travel with an iPad, an iPod, and an iPhone 4S.

As a part of my technical transformation away from PCs, I have tried to understand what makes Macs special. It is more than circuits, operating systems, and iClouds. The difference really begins with a man—Steve Jobs.

Over the years, I have read about Jobs and how he formed and ran Apple. His eye for design and ease of use made Macs what they are. His management style was both famous and infamous.

There was more to Jobs, however, than his drive and creativity. He was a deeply “spiritual” man. Throughout his life, he sought peace and enlightenment. He spent time in a commune, trekked to India to seek the counsel of gurus, and was committed to Zen Buddhism. I wondered: was he ever exposed to Christianity?

With the publication of Walter Isaacson’s new biography, Steve Jobs, I found the answer. When Jobs was thirteen, he saw a magazine cover picturing starving children in Biafra, Africa. Disturbed, Jobs supposedly confronted his pastor. Isaacson describes the encounter:

“If I raise my finger, will God know which one I’m going to raise even before I do it?”

Jobs then pulled out the Life cover and asked, “Well, does God know about this and what’s going to happen to those children?”

“Steve, I know you don’t understand, but yes, God knows about that.”

Jobs announced that he didn’t want to have anything to do with worshipping such a God, and he never went back to church.1

I was very moved by this passage in the book. I wondered what choice Jobs might have made if he had received a sound biblical answer instead of this shallow response?

Jobs’s experience has convinced me more than ever that the Answers in Genesis ministry is vital. We share the Bible’s answers to life’s questions, and we train others to share those answers—and most of those answers begin in Genesis, the foundational book of the Bible.

You see, Jobs should have been told that God made a world without any death or suffering. Adam’s rebellion against a loving, righteous God brought death to all men and corruption to God’s perfect creation. The mess we see in the world is man’s fault, not God’s. The children Jobs saw suffered because of the sin that has corrupted the perfect world God made.

Steve Jobs was not the first person to struggle with this issue. We constantly hear reports of people who have rejected Christianity because they could not understand how a loving God could allow all the death and suffering in the world. It’s a crucial question that every Christian needs to know how to answer.

We don’t know what Jobs would have decided if he had heard what God’s Word really says about suffering and death. The lack of an answer got in his way, and (to our knowledge) he died rejecting the God who offers real peace and salvation.

Jesus Christ stepped into history and tasted death for us. The tragedy here is that Steve Jobs, not hearing the Bible’s real explanation, turned away from Jesus Christ, the Creator and Savior.

Editor’s note: Dr. Mitchell gives an excellent sermon for churches on the topic of why God allows suffering and death. He is also the presenter in the superb DVD God of Suffering and co-author of the new book Answers Book for Teens.