Cleaning up dead animals really stinks—and that’s a good thing, which shows God’s wise provision even in a fallen world.

This article really stinks. It’s putrid, rotten, foul, odiferous, and vile. If the thought of something rotting under the hot sun makes your stomach churn, move along, nothing to see here. But if you’re interested in the incredible, complex design that goes into breaking down animal remains, hold your nose and dig in.

Stages of Life in Death

Quick show of hands. How many of you have spent time watching an animal decay? Anyone? Unless you live on a farm, the closest you’ve come is probably a squashed squirrel or skunk. You catch a flash of innards as you drive by and that’s enough. Yuck!

But all vertebrates (animals with backbones) go through a similar process when they die. In fact, by all appearances, God put in place a sophisticated system to deal with dead things. Death wasn’t part of the original “very good” world (Genesis 1–3), but we can be glad that after Adam’s sin brought death into the world, the Creator made sure dead animals get absorbed back into the dirt. Otherwise, they’d just pile up all over the place. (That would sure take the fun out of your after-dinner strolls.)

As soon as an animal kicks the bucket, things start to explode. Really! Take away the breath of life, and the body’s cells can no longer maintain homeostasis—the perfect balance of temperature, pH, and other important factors. Then . . . boom! They begin to rupture.

This “fresh stage” of decomposition (yes, that’s really the name) lasts one to two days, depending on temperature. The air warms or cools the body to match the outside temperature, and gravity pulls the blood downward. Toward the end of this stage, the skin can start slipping off. But something even more interesting happens deep beneath the skin.

Living animals share their bodies with a rowdy crew. Billions of bacteria have set up camp in their stomachs, throats, livers, intestines, and everywhere else they can cram in. As long as the animal is alive, those bacteria stay in balance, and some even pitch in to help the animal digest food and maintain a healthy system. But after death, those same bacteria that help their hosts digest begin to digest their hosts.

First up on the decay crew are oxygen-loving aerobic bacteria. Living animals breathe in oxygen, and blood cells carry it throughout their bodies. But when the blood’s not pumping, oxygen becomes scarce. So, those aerobic bacteria gobble up whatever they can find.

When the oxygen runs out, the anaerobic (live-without-oxygen) bacteria elbow up to the feast. And these guys don’t mess around. Within hours they infiltrate the liver before spreading to the heart and lungs.

Scientists who can stomach this “fresh” process have found that the sequence of bacteria is consistent across all vertebrates. They’ve even given a name to the living things regularly involved in decay: the necrobiome. This isn’t just a haphazard collection of life-forms; it’s a tightly integrated, highly sophisticated food chain that exists only in death.

But this necrobiome doesn’t stop with bacteria.

Anaerobic bacteria aren’t polite eaters. As they ingest carbohydrates and fats, they release noxious gases. The gases build up and cause the body to bloat up to twice its normal size (the second stage of decomposition, which occurs two to six days post mortem). All those bubbling gases also cause the body’s liquids to froth and ooze out. (Eww!)

Often, the buildup causes the skin to rupture. The hydrogen sulfide and methane that burst out won’t win any awards in the perfume category, that’s for sure. They’re what cause the corpse to raise such a stink. But it’s not all for naught. The ruptures allow oxygen to return and give aerobic bacteria a second chance. With them come tiny fungi with fun names like Yarrowia, a type of yeast, and Lysurus, known—aptly—as the stinkhorn fungi because they have a wretched aroma only a fly could love.

While all this frothing and oozing and spore spreading may sound gross to you, those liquids are a dinner bell for flies and other insects. Blowflies converge to lay eggs, and, later, the resulting maggots gobble tissue. Tiny worms called nematodes work up from the soil into the body and eat the proliferating bacteria. Interestingly, some of the bacteria release chemicals that specifically attract nematodes and insects such as beetles and flies. In turn, those creepy crawlies help remove competing bacteria from the scene. Some of the insects also bring along new types of bacteria and fungi that help with decay.

Those stinky gases are a sweet scent to vultures circling overhead. As they dig in, their sharp beaks speed up the process. You could say the same for coyotes or other toothy scavengers—and they sometimes even drag away chunks of tissue and bones.

With all that activity, we’re gushing into the third stage of decay: purge, which can last up to 25 days.

If you’ve ever stumbled across a rotting carcass, you may have noticed that the grass around it has turned black and withered away. Would you believe that this is actually because there’s too much of a good thing for the plants? During the purge, liquefied fluids pour out that contain a great deal of nitrogen, mostly in the form of ammonia. Normally, plants love a good nitrogen-rich meal, but too much at once will cause them to die back.

Not to worry, though. Come back a year later, and the soil where the animal rotted will be highly fertilized with nitrogen, carbon, and phosphorous (what you’d find in most storebought fertilizers). Plants will grow higher and fuller than before.

By this point, the animal is losing body mass very quickly. All those maggots, bacteria, and scavengers have done a good job consuming the flesh and tissue. When there’s not much left for bacteria to feed on, the process finally slows down a bit and the plants begin to grow back. In warm weather, reaching this stage, “advanced decay,” may take only a few days.

After a few more days or weeks, depending on the weather, the carcass enters the final “dry” stage, where there’s nothing but skin, loose cartilage, and bones—but even then, the bacteria and fungi keep working. A whole alphabet full of strangely named bacteria and fungi take charge. This includes Lactobacillales, which tolerate high acidity, and Acinetobacter, a particularly nasty group of bacteria that cause infections, meningitis, and pneumonia. They can take up to 50 days to complete their job.

Life, Death and a Cursed World

Secular biologists admit how spectacular this tightly integrated system of decomposition is, but they have no good explanation for how it came to be.

That’s where God’s Word, the Bible, gives the answers we need. Adam’s sin didn’t catch God by surprise, and he prepared the biological systems that would be needed to clean up the resulting mess. Look at it like this: The same bacteria that return animals to the dust are the very ones that live inside them. Few of us love studying dead, rotting animals. Besides the stink, the corpse brings us face to face with an uncomfortable truth: Everything dies . . . including us.

It wasn’t originally like this. Death came to earth because of Adam’s disobedience to God (Romans 5:17, 8:22). Bloated bodies, liquefied tissues, and nauseating gases now pollute God’s once-perfect world. It’s enough to make us sick to our stomachs.

We can see our Creator’s wise design and love in something as macabre as the necrobiome. He provided just the right system to break down dead animals so that they would enrich the ground.

But even so, we can find evidence of our Creator’s wise design and love in something as macabre as the necrobiome. He provided just the right system to break down dead animals so that they would enrich the ground—the very ground Adam was told he would have to sweat to cultivate after sin (Genesis 3:19). In fact, God designed a rich ecosystem of life that flourishes in the middle of death. In a way, you could say that even when we’re faced with death, we’re reminded that death isn’t the end of the story.

Jesus, our Creator and Savior, did not see decay after he died (Acts 13:35). He lived the perfect life that Adam couldn’t, died in our place for our disobedience, and then came back from the dead. Because he’s alive, we can now have life in him (John 5:21).

In other words, Jesus won, and one day he will put necrobiomes out of work for good.

A Ticking Clock to Determine Cause of Death 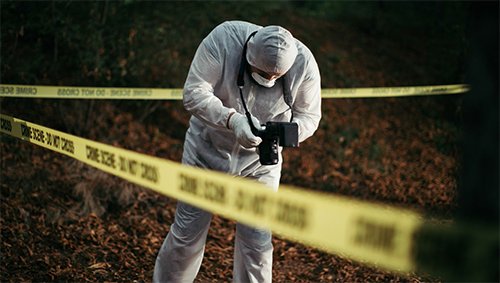 When one biological clock ends, new life begins. In every ecosystem around the planet, a thriving microbial community is patiently waiting and eagerly anticipating the death of humans and animals. It breaks down their bodies with such systematic, clocklike efficiency that forensic scientists believe it can help them determine the time of death more precisely, especially when other forms of forensic evidence are not available.

The timetable of necro-communities appears to be fairly uniform, no matter what species are involved. So this method has the potential to be useful anywhere.

After seven to ten days, evidence of insect activity (one of the main traditional ways to measure time of death) begins to rapidly lose its value, but the necro-microbial clock provides a time frame far beyond that of insects.

The necrobiome can be useful to identify more recent deaths, too. Insects attract very different necrobiomes to a decaying organism, depending on the stage of decay. Scientists have discovered a marked shift in the bacterial community within just 24 hours of death.

Simply by classifying the type of bacteria or fungi present and the abundance of certain species, investigators can uncover valuable clues as to time of death. The study of the necrobiome is still in its infancy, and researchers expect us to find even more hidden clues that will help future forensic investigations.

This is just one surprising way humans can benefit by recognizing the complex, organized, systematic community that came from an all-powerful creator God, who created everything for its purpose (Proverbs 16:4).

Jennifer Hall Rivera is a forensic science educator, speaker, and author at Answers in Genesis. She has worked as a fingerprint examiner in a crime scene unit and as a forensics instructor. Jennifer has been published in the Journal of Forensic Identification and has spoken at numerous forensics conferences.
Previous Article Orangutan—King of the Treetop Trapeze

Even as skepticism spreads around the globe, the creation movement is flourishing. Meet some of the new generation of creation scientists.