Image by NASA, via Unsplash.

Did Simulating “Cosmic Evolution” Get Evolutionists Closer to the Origin of Life? 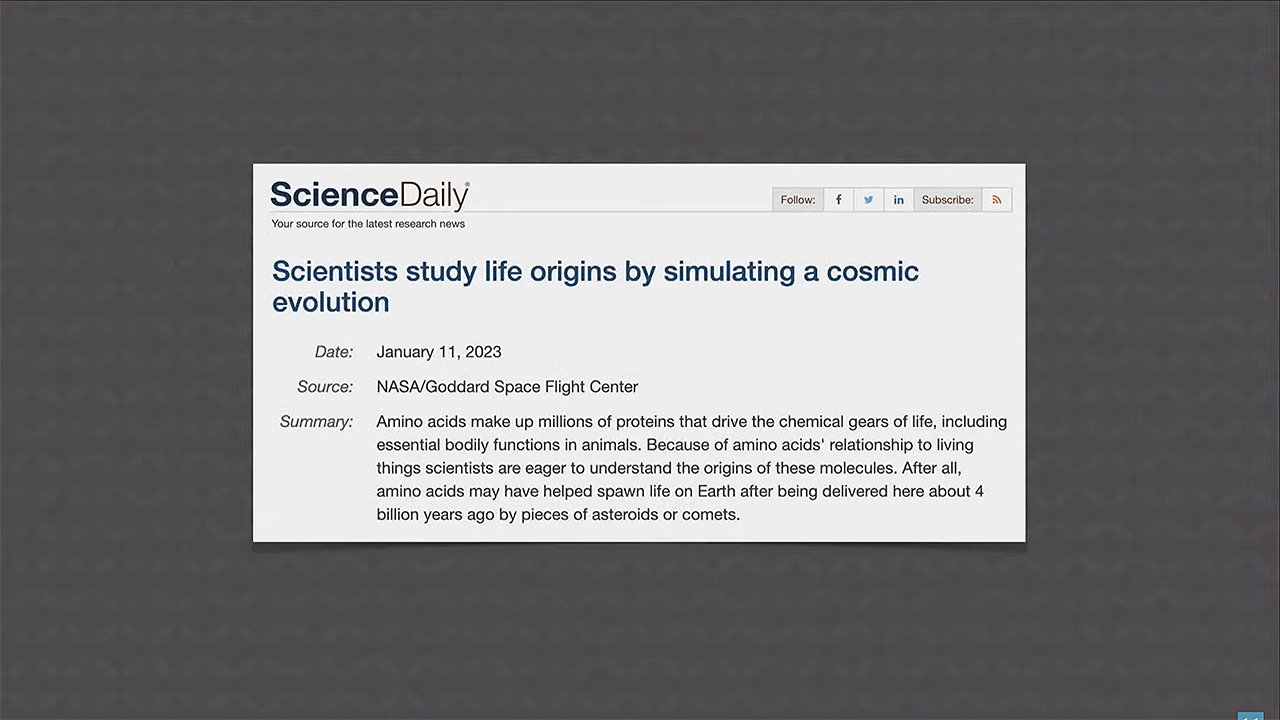 The question of the origin of life is a big problem for evolutionists. Life—even so-called “simple” life—is incredibly complex, and after decades of research and intelligently designed experiments, scientists haven’t come close to creating anything like life. Actually, they can’t even agree on when, where, or how life first began!

Now, one popular idea is that life (or at least life’s building blocks) was seeded to earth via a stellar visitor, such as a meteorite. And a recent article claims that by mimicking “cosmic evolution” in the lab, researchers have created some of the building blocks of life. But what’s really going on here?

Well, these scientists tried to recreate conditions in outer space from “billions of years ago” to attempt to answer the question: did amino acids (the building blocks of proteins which are essential to life) form in our solar system or in an interstellar cloud? Believing these amino acids could form in clouds, the researchers created ices and blasted them with radiation. That radiation broke the molecules apart, and they reformed into amino acids, such as ethylamine and glycine. The researchers believe it was amino acids, like the ones formed in their experiment, that then ended up on asteroids, which then ended up on earth, and from there, life began.

Life is infinitely more complex than a few amino acids lying in some sticky residue.

Now these simulations did create some amino acids—glycine, for example, the simplest of all the amino acids. But even if you have one of the many building blocks of life . . . you don’t have life—not by a long shot! Life is infinitely more complex than a few amino acids lying in some sticky residue. It requires 20 different amino acids, arranged in meaningful ways to build proteins and also needs an entire language system to build and use these proteins . . . so one or two amino acids isn’t getting even close to anything resembling life!

It’s worth noting that, toward the end of the article, the researchers acknowledge that “even after simulating asteroid conditions, the amines and amino acids they produced still didn't match those in meteorites.” So what they created in the lab doesn’t even match what we find when we examine actual meteorites, the supposed “spaceship” that brought these amino acids to earth! (They believe this may be due to contamination, but further research from outer space will answer that question in the near future.)

Also keep in mind with research like this that anything involving a simulation involves a host of assumptions from the researcher and intelligence in designing the experiments. For example, these researchers are assuming the initial conditions from supposed billions of years ago and the conditions of the asteroids these amino acids supposedly hitched an interstellar ride on. Wrong assumptions result in wrong conclusions!

No matter what the scientists might claim, the building blocks of life didn’t arrive from some distant cloud billions of years ago. Life in all its incredible diversity, from microscopic bacteria and fungi to plants to animals to mankind, was created by God just 6,000 years ago. Those who reject God will go to all sorts of lengths to try to prove life arose by natural processes.

This item was discussed Wednesday on Answers News with cohosts Dr. Georgia Purdom, Patricia Engler, and Rob Webb. Answers News is our weekly news program filmed live before a studio audience here at the Creation Museum and broadcast on my Facebook page and the Answers in Genesis Facebook page. We also covered the following topics:

Watch the entire episode of Answers News for January 18, 2023.

Be sure to join us each Wednesday at 2 p.m. (ET) on my Facebook page or the Answers in Genesis Facebook page for Answers News (there is no program Wednesday, January 25, due to an event with End Abortion Now taking place in Legacy Hall that day). You won’t want to miss this unique news program that gives science and culture news from a distinctly biblical and Christian perspective.