How to Win a Debate on Ethics

When Christians get into debates with unbelievers, they sometimes tend to play by the same rules they see their opponents playing by.

Oprah Winfrey, TV talk show hostess, asked her audience why homosexuals should not be allowed to marry one another. One man said something to the effect that 'it wasn't natural'. A woman then rose and gave her lengthy opinion which boiled down to: 'I just don't think it's right!' Most people, however, gave comments like, 'If they want to, what difference does it make?' or, 'Who's to say that it's wrong?'

Then Oprah came to one man who said (à la Ken Ham), 'If God had wanted man to marry man, He would have created Adam and Steve, not Adam and Eve!' Most people in the audience booed, and Oprah responded incredulously, 'You don't believe that do you?' The man, apparently intimidated, shrugged his shoulders and never carried his reasoning any further. In doing so he missed a great opportunity to promote the creation message on national television. 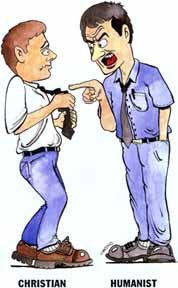 'When Christians get into debates with unbelievers, they sometimes tend to play by the same rules they see their opponents playing by: "Assume that man makes all the rules." But when this is done, only popular opinion can be the winner.'

Actually, the thought underlying this man's statement is the only legitimate reason why homosexual practices are wrong. When there is any question concerning morality, one needs to see who declared something to be wrong in the first place. In effect, this Bible-believer was claiming that the absolute authority on homosexuality was the Bible — in this particular case Genesis. The reasoning goes: If God laid down the rule, then that settles the argument once and for all. But if man made the rule, then man has the prerogative to change it.

LAWS FOR ALL TIME

Most people in the audience, however, were acting on the assumption that the rules on homosexuality were written by people — just like traffic laws are. And to keep up with modern times, these laws sometimes need to be changed. The concept of God making absolute laws for all time tends to go over some people's heads — especially when those laws are disliked.

This mindset is revealed in an Ohio State University-sponsored survey of 323 teenagers. More than 90 per cent of them thought that stealing was wrong, but they weren't sure why. The most common reason given was that they might get caught and be punished. Other reasons included, 'the other person might get even', and 'you might not need the item'.

When Christians get into debates with unbelievers, they sometimes tend to play by the same rules they see their opponents playing by: 'Assume that man makes all the rules.' But when this is done, only popular opinion can be the winner.

Look at the abortion issue. Much of the rhetoric on both sides of the issue appears to be based on the working assumption that man makes the rules, and the winner is determined by the courts. Instead of playing into their hands however, Christians should stick to the absolute nature of these moral issues.

Standing firm on the right foundation … while others crumble.

Christians can do well in such debates if they keep in mind the underlying thought patterns of these 'moral relativists': People who want to write their own rules like to think that their rules will be good for all time. They like to think of them as absolute, even though they most likely will be changed before long.

A homosexual doesn't want to concede that he is basing his viewpoint on fickle popular opinion. He wants his 'rights' etched in stone. The abortion advocate thinks that it is an absolute right that a woman has control over her own body, even when this involves taking another person's life. But in actuality they should know that it can't be an absolute right when it is merely people who are 'giving' women these rights in the first place.

Herein lies the weakness of the arguments of people who have no absolute authority for their moral beliefs:

Consider this exchange between a member of People for the Ethical Treatment of Animals, and a creationist:

PETA member: I think it is wrong to eat meat.

Creationist: God, who created all life, set the rules and said that man could eat animals (Genesis 9:3).

PETA member: Oh … well, I don't think that God would …

From this point on, it is no longer their opinion against your opinion. It is now their opinion against God's final word on the matter. At this juncture they will usually say something to the effect that it is just your opinion that the Bible is God's Word. Then you reply: 'Since you reject God's authority on this matter, tell me on what basis should People for the Ethical Treatment of Animals decide what is right and wrong?'

'Why was it wrong for Hitler to do what he did? If God made no absolutes, Hitler or anyone else would have the right to set his own rules and his own agenda. He got most of Germany agreeing with his ethics, which he sincerely believed were good and right. Because of this, many people perished. Are you willing to say that he was right? If you think he was wrong, on what basis are you deciding that it is wrong? Why then should people believe your opinions concerning animals?'

Without too many words, you have pointed out the hypocrisy of his 'wannabe absolutist — but can't admit it' position, and the shifting-sand foundation of his ethics.

At this point, most people have to stop and think about the contradiction that exists in their assumptions. This is a step in the right direction. The next step is to introduce them to the foundation that Genesis provides. Hopefully, they will then begin to understand that they have transgressed God's absolutes and are in need of a Saviour.