Headin’ Down the Highway

That was the riddle posed by a motorcyclist, just after he climbed off his motorcycle at the Creation Museum construction site after driving 550 miles from Georgia to Northern Kentucky. 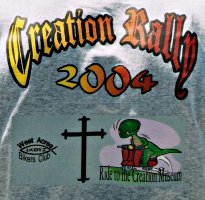 Question: How can you tell a happy motorcyclist?

Answer: By the bugs between his teeth!

That was the riddle posed by a motorcyclist, just after he climbed off his motorcycle at the Creation Museum construction site after driving 550 miles from Georgia to Northern Kentucky. He and more than 30 cyclists—from at least four states—enthusiastically participated in the first ‘Creation Museum Rally’ on Saturday, 21 August. Others arrived using a more conventional mode of travel (i.e. cars).

Eleven of the motorcyclists had made a day-and-a-half journey from Evans, Georgia (near Augusta), which included a ride through rain showers. This group represented West Acres Baptist Church, which hosted AiG–USA president Ken Ham a few years ago for a major family conference. Some cyclists said that this meeting first excited them about AiG’s unique museum project to depict a biblical ‘walk through history.’ 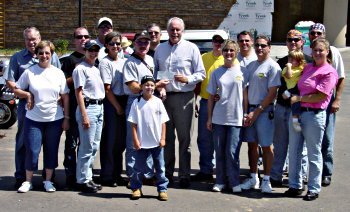 Joe Rich and the other motorcyclists from Georgia (along with some family members who tagged along in cars). Here, Mr. Rich (with cap) presents AiG–USA vice president of outreach, Mark Looy, with a check in the amount of $2,750 to the museum project.

Several weeks ago, church member Joe Rich learned that Mr. Pat McClanahan of Indiana was organizing a motorcycle rally. So Mr. Rich asked his pastor about sponsoring a fundraising event for the Creation Museum. After getting the go-ahead, Mr. Rich began to accept donations and recruit riders. One eager participant offered to donate $500 if their pastor, Larry Harmon, would go down a water slide—in his suit. And, he did!

Mr. Rich presented the church’s check (in the amount of $2,750) to AiG, and then he and his Georgia group—and the other riders—toured the inside of the facility, as well as the new headquarters adjacent to the museum (where AiG–USA will be relocating its offices in early September). Another donation will be coming soon from several riders in the Indiana contingent, who will be collecting faith-promise gifts. 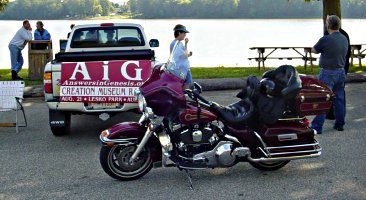 The volunteer event organizer, Mr. McClanahan, announced on Saturday that he wanted to make the motorcycle rally an annual event. He believes that many more riders will participate next year (date yet to be determined) because they will be able to see much more than a shell and concept drawings, but some finished exhibits and a busy new office.

To view recent photos of the construction progress, or to take a virtual tour of the museum, go to our museum section.

If you were moved by the generosity of these dedicated riders and want to contribute to the museum project yourself, click here.