Interview with the Ho family

This is an amazing family: four siblings who all entered university by the age of 14 or younger (one at the age of 10!).

In the eyes of the secular world, what makes them even more amazing is that these exceptionally gifted children (now adults) believe in the Bible from the very first verse, including the historic and scientific reliability of the book of Genesis.

The Ho children–Samuel, Adina, Susanna and Sean–are the four remarkable children of Dr William Ho (M.D.)1 and his wife, Dr Esther Su (Ph.D., biochemistry).2 Fleeing the Communist Revolution in China of the late 1940s, Dr Ho settled in Hong Kong, where he received his medical qualification, and then emigrated to the United States in 1964.

His fiancÈe, (later, Dr) Esther Su, had already moved to the US from Hong Kong and was finishing her Ph.D. in biochemistry at the University of Michigan (they had grown up together in Hong Kong). Their life stories and Christian testimonies (to follow later) are fascinating in and of themselves, but when interviewed, these parents concentrated on their four exceptional children and how the Lord was equipping and using them for ministry:

Son, Samuel–entered the University of Washington (Seattle) at age 10! He completed his mathematics degree at 13, and earned a Ph.D. in computer science at the age of 22. He is currently working in computer research in Massachusetts.

Daughter, Adina–enrolled in the University of Washington at age 14 and received two bachelor’s degrees by the age of 19 (in chemistry and music). She then obtained graduate degrees in genetics and psychology (four different degrees in all), and is currently a school psychologist in Massachusetts.

Daughter, Susanna–entered the University of Washington at age 14, and earned two bachelor’s degrees by the age of 18 (in chemistry and biochemistry). By age 26, she had earned an M.D. and a Ph.D. (in molecular genetics) from Harvard Medical School.

Son, Sean–enrolled in the University of Washington at age 13, and by the age of 20, had earned both a B.S. and M.S. in mathematics. He is currently finishing his Ph.D. in computer science at the University of North Carolina.

What makes her most happy about her four children is not their incredible scholastic accomplishments, but that they are believers in Jesus Christ.

In an interview conducted with Dr Su in North Carolina (with son Sean at her side), she revealed that what makes her most happy about her four children is not their incredible scholastic accomplishments, but that they are believers in Jesus Christ–and that they actively share their faith in one-on-one evangelism and through public lectures. Each one gives illustrated presentations on Bible/science topics to a wide range of audiences.

The children’s father, Dr Ho, gives credit to his wife in raising their four “unusual children” as he termed them. “In my family, God has given me a loving and saintly wife who has all but sacrificed her career in biochemistry to care for our children, who now serve actively at church.”

Now that Dr Ho has given up his medical practice, he devotes most of his time to speaking on a wide range of issues, including creation vs evolution (which is one of the most-requested topics he receives).

At dinner, Sean (at age 23, the youngest sibling) made a mock apology for being the “slackard” in the family because he had not yet finished his Ph.D.! He does not know where the Lord will eventually use him and his ability in computer science, but he informed me that he would definitely use his future job as a platform for sharing his faith.

Susanna told me that she “came to know Christ at age three, under the guidance of my parents”. As a 26-year-old biochemist, her years of study on the complexity of living things have shown her that “only He, the Creator, could have called life into being. Having realized firsthand the amount of research it takes to even begin to understand one small function of a single-celled organism,” she continued, “I appreciate the designing wisdom of the One who created all of life.”

Adina, now 30, shared with us that she “grew up in an environment saturated with Scripture. The Bible was read to us before we were out of the womb!” She received the Lord at age four, and from that point she was encouraged by her parents to use her “God-given reason to explore the objective reasons for accepting the Bible as literal and scientific truth”.

At age nine, Adina was already taking university classes, but her parents decided not to enrol her full-time when they discovered that she would be saturated in strong anti-Christian, evolution-based teaching, and so they placed her instead in a solid Christian high school.

In her profession as a school psychologist, Adina sees the consequences of the Fall of mankind on a daily basis. “I witness the truth of Genesis displayed in the brokenness of sin-defiled humanity. Spiritual, physical and emotional decay in children are striking reminders of the disobedience of our first parents, and the decay that entered all people through them.”

Samuel, the eldest, lives near his sister Adina, and is a senior engineer for a major computer firm located in the Boston area (where he designs computer chips).

As an occasional lecturer on such topics as cosmology and physics from a Genesis perspective, Samuel uses many of his parents” overhead illustrations to help teach audiences that the Bible and real science are not in conflict. As he grew up, his parents taught him not to fear the pursuit of knowledge, and so even as he examined the thorny question of the age of the Earth, he saw from both Scripture and science that the world is young. He commented: “Biblically it makes sense, and the only reason evolutionists want an old Earth is to have enough time for evolution to occur.”

Samuel believes that the creation vs evolution issue is a vital one, because “where we come from is the foundation of everything we believe”. Further, “When we have the right starting point–Genesis–science makes sense. Too many scientists build on a wrong foundation–evolution.”

Dr Su politely sidestepped the question as to whether or not her children’s remarkable intellect has something to do with genetics, other than to say that “all children are gifted, and those gifts are given to them by their Creator. Parents are responsible for nurturing and developing what their children have already been given.”

The familiar “nature versus nurture” riddle, she says, “is for others to figure out. What you teach children, however, is far more important than their capacity to learn. You see, if you teach a smart kid that he evolved from monkeys, he will perhaps act like one. But if he’s convinced that he’s created in God’s image, he will be more inclined to know that there is right and wrong, spiritual laws designed by the Creator. When we follow them (the ‘manufacturer’s instructions’), our lives will go well.”

The four Ho children are so well grounded, both academically and Biblically, because of the training they received from their godly and high-achieving parents. While a college student, however, Dr Su had to struggle over the creation vs evolution issue and the authority of the Bible. She decided to systematically tackle two areas: “I therefore set up for myself basic questions to answer in order to prove scientifically whether or not the Earth and universe were created, and then to determine if the Bible was true.

“I discovered that science was very limited because scientists can only study the present. Science requires observation, but you can’t observe the past. So, the question of whether or not the universe was created is a historical question, not a scientific one. The question should be whether or not the evidence we observe today supports creation or evolution.”

Dr Su conducted an intensive study into three areas. First, she looked at paleontology. “If evolution is true,” she posited, “then there must be all kinds of ‘in between’ forms of creatures.” 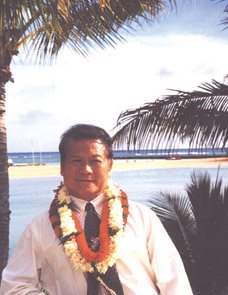 Dr William Ho during a visit to Hawaii.

She discovered that the fossil record, as well as observations of living things, supports the Creation account, that all things reproduce “after their kind” (10 times in Genesis). “When I was able to distinguish between the facts of science and the opinions of some scientists, the truth was obvious,” she added.

Second, she looked at biochemistry, her field of expertise, and saw tremendous complexity in living things–telltale signs of a Master Designer. “The design of life is something that cannot be explained without a Creator. Even a so-called ‘simple’ cell is so very complicated.”

Dr Su then carefully studied Biblical prophecy, and discovered that what the Old Testament foretold about the coming of Christ all came true. “There were just so many prophecies–and so much detail–about the coming Messiah.” So, during graduate school, and after much study of the Bible, she says, “I gave myself to God the Creator”.

Drs Ho and Su expressed their gratitude for organizations such as Answers in Genesis that uphold the authority of the Bible from the very first verse. Their study of both science and Scripture also leads them to agree with AiG that the Earth is young, not millions of years old–and that the very Gospel message itself is tied to that issue.

She said, “For this, the words of Scripture and the opinions of theologians need to be distinguished. Death of creatures before Adam and Eve’s sin could never have happened. If it did, death is not the result of sin. ‘Sin’ means missing the mark, or being not ideal. A non-ideal ball that does not bounce back to its original height will ‘die’–not bounce forever. But death is the result of sin (Romans 5:12), so when Jesus Christ died in our stead and rose again, He conquered death and took care of the sin problem. When we, who have inherited Adam’s non-ideal life, trust in Christ, He gives us His own life which is ideal, and therefore eternal.”

Dr Ho reported that this vital doctrine of “no death before Adam’s Fall” is a wonderfully effective evangelistic tool. He declared that through such teaching from Genesis, “people receive Christ at almost all of our meetings”.

Indeed, that’s the aim of the AiG ministry worldwide–to use “creation evangelism” to break down the stumbling blocks that non-Christians have to being receptive to the Gospel message.

It is encouraging to know that these six very gifted and highly intelligent Christians are presenting the life-changing Creation/Gospel message to so many people.