The board of Answers in Genesis–United Kingdom is very pleased to announce the appointment of Dr. A.J. (Monty) White to head the growing ministry of AiG in Darwin’s homeland. 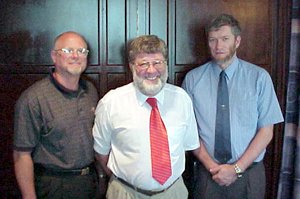 The board of Answers in Genesis–United Kingdom (Great Britain) is very pleased to announce the appointment of Dr. A.J. (Monty) White to head the growing ministry of AiG in Darwin’s homeland.

Not only will Dr. White use his administrative skills in his new post, acquired while at the University of Cardiff in Wales, but as someone who has been speaking on creation and evolution since 1971, he will divide his time between overseeing the AiG office and traveling to proclaim the creation/gospel message.

Dr. White will assume his new position and relocate to the Leicester, England office in a few weeks. The board also extended its sincere thanks to outgoing administrator Graham Scott, who is going into semi-retirement.

Dr. White—who holds a doctorate in chemistry (gas kinetics) from the University of Wales, is a member of the Royal Society of Chemistry, and has held various administrative positions at Cardiff University in Wales—converted from atheism to Christianity in 1964 while an undergraduate student.

It was not until 1969, however, that he became a creationist, after being challenged about the historicity of Adam. About two years later he began speaking on the book of Genesis. Since then he has written four creationist books (e.g., Why I believe in creation) and dozens of articles and booklets on the topic of origins. Dr. White has spoken in several countries, including a regular teaching stint at the State Independent Theological University of Basel, Switzerland.

AiG in Great Britain is a part of the Answers in Genesis group of ministries, with legally independent (but affiliated) offices in Australia, New Zealand, the United States, Canada, and Japan (all accepting the same statement of faith, having some board members in common, and working in complete collaboration, utilizing joint management and outreach strategies). From Britain, Dr. White will be traveling throughout continental Europe and overseas. AiG speakers from the sister ministries will also be visiting to Britain and Europe to help grow the ministry, especially as they follow up the well-received speaking tour and BBC-TV appearance by Ken Ham of AiG–USA last March.

In a few weeks on this website, Dr. White will be sharing his thrilling Christian and creationist testimony. Ken Ham, who has known Dr. White for many years, declared that he was “absolutely thrilled to have someone with his background and qualifications to help AiG effectively reach the United Kingdom and Europe.”