Early this morning, well-known evangelist and pastor—and good friend of AiG and its evangelistic Creation Museum—Dr. D. James Kennedy passed away in his sleep. 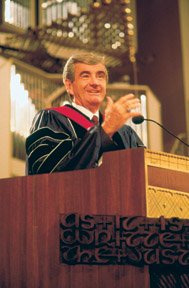 Early this morning, well-known evangelist and pastor—and good friend of AiG and its evangelistic Creation Museum—Dr. D. James Kennedy passed away in his sleep. He was 76.

Dr. Kennedy had been in ailing health for several months after suffering a cardiac arrest last December 28. He had only recently resigned from his church, Coral Ridge Presbyterian of Ft. Lauderdale, Florida.

AiG President Ken Ham, currently on a speaking tour of Scotland (Dr. Kennedy, by the way, traces his ancestry to that country, and named his seminary after the famous Scottish reformer John Knox) declared:

The church has lost a great pioneer of evangelism. Yes, most people probably know him for his worldwide TV broadcast and his radio programs, but at heart he was a pastor—one who shared the truths of God’s Word in church, and the gospel message most of all.

Sermons by Dr. Kennedy for his congregation formed the basis of most of his international TV broadcasts, and he also inserted well-done documentary features. Last year one of his video crews filmed at the Creation Museum as it was under construction.

Here is a partial listing of the many ministries Dr. Kennedy founded and oversaw: 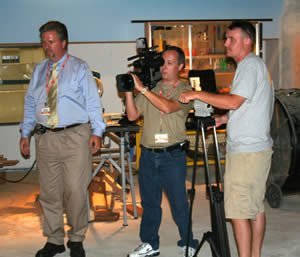 He was also the author of more than 55 books, including Evangelism Explosion (more than 1.5 million copies in print). Born in Augusta, Georgia, but raised in Chicago, Dr. Kennedy leaves behind his wife Anne and married daughter, Jennifer.

One of Ken Ham's fond memories of Dr. Kennedy included the first time they met in the 1980s. Ken recalls:

About 20-25 years ago, when I was still living in Australia, I would come to America from time to time to conduct speaking tours. On one of those early tours, I was invited to preach at the Sunday evening service of Coral Ridge Presbyterian Church.

Dr. Kennedy took me into his vestry, appearing to be quite serious at first. But I’ll never forget the first thing he said to me—and it quickly revealed a part of his nature that most people wouldn’t see on TV or hear on the radio:

“Do you know what a bison is?”

“I think so. It’s a buffalo, isn’t it?,” wondering where this conversation was headed.

Dr. Kennedy replied with a small grin, “No, it’s a place to wash your fice [face] in!”

I realized he was making a little fun of my Australian accent. You see, Americans think our a’s sound like i’s.

Well, that broke the ice right there. I had a privilege of getting to know this humorous—yet scholarly—man who loved God’s Word and tirelessly defended it. Here was this well-known man of God and academic whom the Lord used to bring evangelistic programs to virtually all nations (and countless numbers were saved), and yet I found him to be a down-to-earth person even with the many degrees he had after his name.1 He was a phenomenal statesman for the Christian faith.

Dr. Kennedy allowed me to speak in his church a few times over the years, and he permitted his name to be associated with our Creation Museum as our “national honorary chairman.” We are so grateful to have known him.

Dr. Kennedy’s funeral will be held at Coral Ridge Presbyterian Church on Thursday, September 13, 2007 at 1 PM (doors open at 11 AM). Please continue to pray for his wife Anne and daughter Jennifer, as well as for the leadership of his church—and then for our good friend Brian Fisher who, as executive vice president of CRM, leads the parachurch side of Dr. Kennedy’s ministries (he has big shoes to fill right now).