Photo courtesy of the Iskanders

Just What the Doctors Ordered

Two Egyptian medical doctors, Nagy and Nashwa Iskander, share a burden for reaching Scotland’s younger generation with biblical truths. These two energetic Egyptian nationals have launched numerous outreaches. Their original approach to sharing the gospel was transformed, however, when they discovered the foundational importance of Genesis to the Christian faith.

Nagy, a surgeon, serves as the religious representative in the region’s Education Resource Committee. He teaches the books of the Bible in government schools as part of the official religious education curriculum. During discussion time, Nagy regularly receives questions about creation and evolution.

Burdened by the fact that so many young people have little knowledge of the Creator and Savior, he and his wife, Nashwa, a specialist in neonatology and pediatrics, started a community club in 2001 called “Jesus and Me” (JAM) where youth learn gospel truths in fun ways, beginning in Genesis.

The club’s popularity grew so much that community leaders took notice, and the owner of a nearby shopping mall even donated an expensive store space to Nagy and Nashwa, allowing them to reach even more youth through the club. During Christmas and Easter, the shop gets transformed into an interactive exhibit, using the Seven C’s of History, which communicates main events in biblical history. Activities include showing videos and reading literature that answers some of the most-asked questions about the Bible. 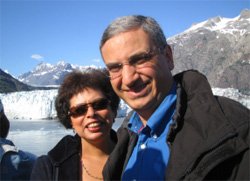 Nagy and Nashwa Iskander. Photo courtesy of the Iskanders

Nagy and Nashwa have another passion—reaching those in their native country of Egypt, where Darwinian evolution has infiltrated most Bible education in the churches. Christian young people are taught to read Genesis symbolically. Nagy and Nashwa are convinced that creation material based on a young-earth perspective is essential for transforming the church in the Arabic-speaking world. Their first step to help has been translating several creation resources. They also hope to launch a full-fledged Arabic website soon.

Frequent travelers to Egypt, they plan to organize television debates about creation-evolution, lead training seminars, and produce a TV program in Arabic that explains the Creation Museum exhibits.