Dinos in the den

[Editor’s note: This article was adapted from a news release distributed to the media last week.]

AiG’s Creation Museum near Cincinnati, Ohio unveiled its newest exhibit last week—a 4,500-square-foot, two-story Dinosaur Den. It features several sculpted dinosaurs and real dinosaur bones, plus real dino eggs. It has helped draw even larger crowds to the museum: over 2,000 guests per day are now being regularly seen at this high-tech center (sometimes over 3,000—Saturday, there were 3,400 guests). 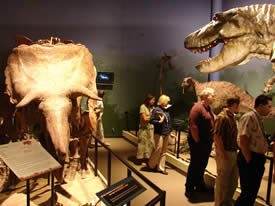 AiG staff had the opportunity to take an early morning tour of the new Dino Den exhibit before opening hours.

“We are so thankful to have the resources to build a quality exhibit devoted to the very creatures so closely associated with the arguments about creation and evolution,” said Ken Ham, co-founder and president of Answers in Genesis, the ministry that built the Creation Museum. “We are hoping that people of all ages will enjoy the dinosaur displays and learn that the science of paleontology supports biblical creation.” (Be sure to read our fascinating booklet about the Bible and dinosaurs.)

Over the past decade, the Creation Museum staff has been collecting items such as dinosaur bones and eggs, and then building major exhibits related to dinosaurs in order to use them as a major teaching tool in the Creation Museum. The Dino Den features many of these items and a dozen dinosaurs, including an exquisitely sculpted 40-foot-long Tyrannosaurus rex built by AiG’s Buddy Davis, plus a cast of a huge Triceratops.

There are also videos and a theater where guests can watch a 12-minute film, recorded on location at a castle in England (a nation where many dragon legends originate). The film shows how the Bible explains the mysteries surrounding dinosaurs. Guests then exit and head upstairs to a stunning bookstore that resembles the sitting room of a medieval English castle.

“Most cultures have major flood stories in their past,” Ham noted. “We believe that is because the earth was once flooded, and it lends support to the argument that there really was a Noah’s ark. In the same way, almost every culture has stories about dragons. We believe this is because people and dinosaurs inhabited the earth at the same time, and what we would call a dinosaur, the ancients referred to as dragons.”

Elsewhere in the museum, four animatronic dinosaurs—which move very realistically—can be found. These stunning exhibits help ensure that the museum’s goal of teaching the true history of the world according to the Bible is met, as opposed to how dinosaurs are often used by evolutionary museums to promote their belief system.

Attendance has been higher than expected since the museum opened 6 weeks ago. Including pre-grand opening events, over 74,000 guests (through July 9) have toured the facility—indicating the museum may exceed its projections of at least 250,000 visitors attending the first year of operation.