Give Now
A Tour of the Creation Museum Series

on September 25, 2012
Featured in A Tour of the Creation Museum Series
Share:
Email Using:
Gmail Yahoo! Outlook Other

Creationists and evolutionists have the exact same evidence, but we have different starting points, so we often reach different conclusions.

The first two areas in the Walk Through History are dedicated to laying the foundation for the museum’s examination of the most important points in the ongoing debate over creation, evolution, and the age of the earth. That is, creationists and evolutionists have the exact same evidence, but we have different starting points, so we often reach different conclusions.

The Walk Through History begins with a quick trip through the Grand Canyon, giving guests a close-up look at reproductions of the sedimentary rock layers. A question is posed, “Were canyons carved over a long time by a little bit of water or a lot of water and a little bit of time?” Children have the option to enter through the Secret Canyon, which contains glow-in-the-dark activities and other fun elements. Both paths meet up at the Observation Station and the question is asked again: How did canyons form?

Beyond the Observation Station is the Dig Site, a room full of questions. The evidence is in the present, but what happened in the past? What do we know about dinosaurs?

Two scientists are shown digging up a Utahraptor skeleton. They are looking at the same evidence, but they use different starting points. One starts with God’s Word while the other starts with evolutionary assumptions.

Dinosaur fossils don’t come with tags on them telling us how old they are, where they lived, what they ate, or how they died. We attempt to figure those things out from a few clues that we find. These questions are asked throughout this room in various settings—a Coal Mine, replicas of the famous archaeopteryx fossil and Lucy’s bones, fossilized trilobites, and a clutch of fossilized segnosaur eggs. 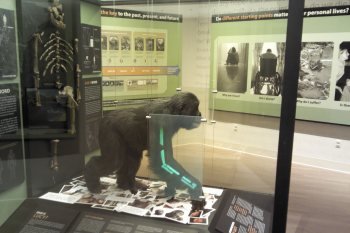 “Same facts, but different views… why?” This question greets guests as they move into the Starting Points room, which begins to answer the questions asked in the previous room by examining the two different starting points—God’s Word and man’s word. Large charts and illustrations show that we have the same universe, plants and animals, apes and humans, rocks, and fossils, yet we reach different conclusions about these things because of our different starting points (our presuppositions).

The Starting Points room is also home to two of our most spectacular exhibits. The high-tech Lucy exhibit recently opened to rave reviews. Featuring holograms alongside a sculpture of Lucy to show viewers the bone fragments of the creature’s skull, pelvis, legs, and arms that were actually discovered, this sophisticated display highlights the reasons why we believe Lucy should be considered as a member of an extinct ape species. The exhibit shows various artists’ reconstructions of Lucy’s head based upon different presuppositions about what this creature was. There is also a replica of the famous Laetoli footprints. 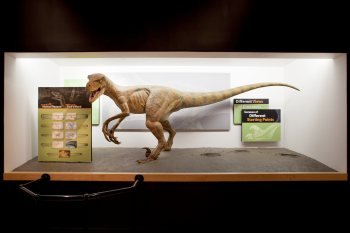 Our exquisite sculpture of a Utahraptor (the same species as the skeleton in the Dig Site) shows visitors how people usually interpret data differently based on their presuppositions. This particular sculpture is so stunning that even the evolution-based Smithsonian Institute unknowingly used it in one of their major promotional brochures. The Milwaukee County Zoo did the same on one of their bilboards. These incidents highlight the impressive quality of the workmanship at the Creation Museum.

These rooms also introduce visitors to a newer feature of the Creation Museum—the Kneehigh Museum. These displays are designed for younger guests to learn about the subject matter in interactive ways. In the Dig Site, a large rock wall has seven different hidden fossils, a real dinosaur fossil that can be touched, and several other activities for kids of all ages.

The next rooms in our tour will start to answer the question, “How do we know God’s Word is true?”

Previous Article A Tour of the Creation Museum: The Main Hall Next Article Christmas Town