Our Museum Dino Is Famous

One of our Creation Museum dinosaurs was again spotted outside our Northern Kentucky/Cincinnati area. You may recall my blog item in July (Young Girl Discovers Smithsonian Is Using a Creation Museum Dinosaur) when I shared about one of our wonderfully sculpted raptor models being found on some promotional advertising for the Smithsonian Institution in Washington, D.C. Well, our dinosaur recently appeared on a billboard in the Milwaukee area, to promote a local zoo (the Milwaukee County Zoo). Here is how we found out about the unapproved use of our dinosaur image, as reported by a staff member who was driving through Milwaukee late last month:

Yesterday my family and I were on our way home after a trip up to Wisconsin. While on our way back, my mom said, "Oh look! Is that a Creation Museum billboard?" I glanced up and there was billboard for the Milwaukee Zoo, except they were using a photo of our dinosaur -- the very same one that the Smithsonian used in their advertisements. I decided to report it, because of what happened with the Smithsonian. I'm attaching a photo of the billboard that I found from Google, as I did not have time to snap a picture of it myself.

Just a few miles down the road was one of our museum “Mighty Mastodon” billboards. How ironic.

Have a wonderful day. 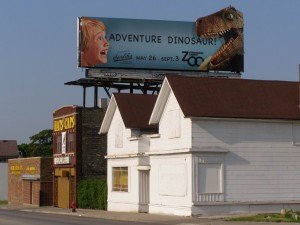 Both the Smithsonian and the Milwaukee County Zoo had apparently taken a photo of our dinosaur from a “stock photo” source—so that the image could be used to help draw visitors to their attractions. We’re relatively sure that both institutions were unaware of who owned the rights to this image (in fact, it was probably an ad agency that each of them hired to create the advertisements that used the unauthorized image). But we notified both the Smithsonian and the Milwaukee zoo that we believe the image was taken by a visitor to our museum and then given (sold?) to a photo bank.

Even though the image is being used in an unauthorized manner, we have been willing to allow the use of the image, provided that the proper credit be given to the Creation Museum (the Smithsonian decided, however, to remove the image from its brochures). Now, the zoo’s dinosaur-billboard campaign ended earlier this month, so we did not make a big issue out of the use of our dinosaur on its board.

It is somewhat ironic that as so many humanists attack and mock our Creation Museum, and even say that our museum is a “pseudo” one, that our high-quality museum dinosaur model is being used in promoting major attractions—including the Smithsonian and its heavy evolutionary content!  Yes, AiG sculptor Doug Henderson’s well-done sculpture is being used by secularists!

Here is a previous AiG article about this billboard irony: