A Tour of the Creation Museum: The Main Hall

on September 18, 2012
Featured in A Tour of the Creation Museum Series
Share:
Email Using:
Gmail Yahoo! Outlook Other

After obtaining tickets, a journey through the Creation Museum begins in the Main Hall. This expansive room and the connected Portico serve as a hub to most of the museum’s attractions: the Stargazer’s Planetarium, Special Effects Theater, the Walk Through History, Dragon Hall Bookstore, Foto FX, Noah’s Café, and more.

Upon entering the Main Hall, visitors immediately come face-to-face with the first-class quality of our exhibits. Whether it is the massive mastodon skeleton, the forty-foot-long animatronic sauropod dinosaur munching on leaves, or the hundreds of fossils and minerals, each and every display was meticulously crafted to be top notch. 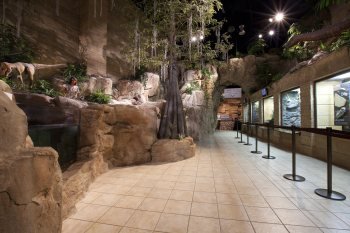 This vast area also contains a variety of living creatures, including some colorful finches, vibrant poison dart frogs, and chameleons in windowed enclosures. Video monitors run short presentations explaining some of the incredible design features of these wonderful creatures and introduce guests to some of the issues addressed throughout the museum.

A waterfall plunges into a large aquarium containing a variety of fish, including some “living fossils” known as gar—fish virtually identical to those that allegedly lived 140 million years ago. The hall boasts some other “living fossils” as well—turtles and replicas of cypress trees, plus a display case full of specimens and pictures with their respective fossils for comparison.

Perhaps more eye-catching than all these highlights are the two famous animatronic children playing alongside young tyrannosaurs. This display alone lets guests know that this is no ordinary museum. Rather than repeating the secular idea that dinosaurs lived millions of years before man, the Creation Museum promotes the biblical teaching that all land animals—even dinosaurs—were created on Day Six, the same day as man.

Some incredible displays can be viewed in the Exhibit Hallway that starts and ends in the Main Hall while surrounding the Special Effects Theater. In these displays you will find the following:

It has been said that you only get one opportunity to make a first impression. The Main Hall leaves a lasting impression on visitors by deliberately portraying a setting that is at odds with the secular view of the past. This sets the stage for the other exhibits of the museum—all of which were developed with the goal of upholding the truth of God’s Word.

The following are additional features of the Main Hall and Portico: