Tearing Down Temples in Bulgaria

Bulgarians have been brainwashed for decades with the lie of evolution and millions of years. Surely, science has proven that the Bible is full of mythology, most Bulgarians think.

Like the rest of the industrialized world, Bulgarians have been brainwashed for decades with the lie of evolution and millions of years. Though many of them identify with the Bulgarian Orthodox Church, most are atheists. Surely, science has proven that the Bible—especially Genesis—is full of mythology, most Bulgarians think.

A Nation Without Answers

Most Bulgarian Christians (a tiny minority) have not thought much about these topics, and they don’t see the importance because almost no creationist literature is available in the Bulgarian language. So they don’t know what to believe about Genesis or how to respond to the challenges of unbelievers.

Dr Mortenson traveled Bulgaria speaking on the evidence of creation at the cities shown above.

For two weeks in April, I had the wonderful opportunity of presenting the biblical and scientific evidence for Creation and Noah’s Flood to Christians and non-believers in Bulgaria. My speaking tour was organized by the Bulgarian Campus Crusade ministry. I spoke 14 times to about 800 people in churches and in university lecture halls in five cities across the country. I participated in two debates with a genetics professor of the biology faculty of Sophia University. The presentations usually took about 1-1/2 hours (with translation) but were then followed by 1-1/2 to 2-1/2 hours of questions from the audience. I was also interviewed and part of one lecture was videotaped for a half-hour weekly Christian TV program, to be aired on a secular station at prime time on the Saturday evening after I departed.

Many non-believers came and asked genuine questions, both scientific and biblical. They had never heard what the Bible actually says, nor had they heard someone give informed reasons for believing what it says. Christians also commented that they were greatly encouraged and equipped to be bolder witnesses.

At a church in Veliko Trnovo, the pastor said that in all his 25 years of ministry in that city, he had never heard of a lecture like mine. Since the church was cold that night, everyone wore a jacket. But people sat for 3-1/2 hours, and at the end, the pastor, who had been taking notes, said he would gladly have stayed for several more hours.

“This is a Temple of Science!” the Professor Raged

After a university lecture in Ruse, a professor got up and protested, “Everything this man has said is a bunch of [expletive]. I have taught for 30 years here, and this is a temple of science!” After a few more vitriolic remarks, he abruptly left the room. Since he had not offered a single refutation to any specific point in my lecture, I reminded the audience that personal attacks and general dismissals are no substitute for reasoned arguments and that they needed to not just accept what they had always been taught but to earnestly seek the truth.

Following each university lecture or debate, the Campus Crusade staff had comment cards for people to fill out. In this way they will be able to make personal contact with people to give them a free AiG booklet that was just translated into Bulgarian, Is there really a God?, as well as hopefully talk to them about the claims of Christ. 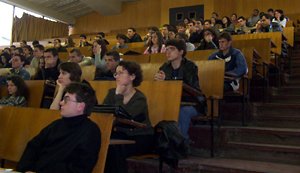 Students listen attentively during a debate at Sophia University.

Andy, one of my translators, came up to me after my first lecture and said, “Well, that lecture pretty well destroyed my belief in the gap theory. I can see I need to think about this some more.” And that he did, as he traveled with me. By the end he really saw that the age of the earth did matter and that in accepting millions of years he was unconsciously accommodating philosophical naturalism (in effect, atheism) in his thinking. He and several of his translator friends now want to translate two AiG books, Refuting Evolution and Refuting Evolution 2, and put them on a new apologetics website in Bulgaria.

AiG hopes to help the tiny group of believers in this evolutionized country by translating materials that will equip the church and be powerful tools in evangelizing. In addition to Is there really a God?, three more booklets (about Cain’s wife, dinosaurs and racism) have just come off the press. The translation of The Answers Book will begin soon. In addition, four of my PowerPoint talks were translated into Bulgarian, I gave a CD containing these talks to five key people and a copy of all my English PowerPoint talks, and I gave overhead transparencies for three of my Bulgarian talks to a CCC staff member in Sophia. Already I have received word that these resources are being used to proclaim the gospel and defend the Scriptures.

“He Accepted Christ, he is not Drinking Any More, and he Evangelizes”

Just after I returned home from Bulgaria, I received an email from a pastor in Moscow where I spoke last October, reminding me what this ministry is all about—seeing sinners saved and Christians emboldened. Pastor Nik wrote,

“One man was unbeliever with long story of alcohol slavery just before your lectures on creation started in our seminary. The evolution theory was the only obstacle that prevented him from being saved by grace through faith. After your lectures all walls of distrust were broken and he accepted Christ after a church service on Sunday and since was never the same. He is NOT drinking anymore, and his health got better. His name is Oleg and he is in his 40s. Since last month he evangelizes with the church and personally, sharing with his friends how God saved his life.”

How exciting! I’d like to thank all those who partner with AiG in proclaiming the truth of God’s Word from the very first verse, around the world. Without your generous ongoing support, AiG could not have sent me on this trip.