There Is Hope for Atheists!

When I read some of the atheist blogs, Facebook posts, and news articles that display a sheer hatred against Christians (really, it’s a hatred against God), it can seem, humanly speaking, hopeless to try to reach these secularists with the truth of God’s Word and the salvation message it presents.

And yet, we can be encouraged to read of the incredible conversion of Saul (who severely persecuted Christians) in Acts 9 and realize that God’s Word can penetrate even the most hardened heart. Indeed: “For the word of God is living and powerful, and sharper than any two-edged sword, piercing even to the division of soul and spirit, and of joints and marrow, and is a discerner of the thoughts and intents of the heart” (Hebrews 4:12).

As I read many of the comments by atheists (blasphemous and vitriolic as some of them are), I also understand that they have been indoctrinated in evolutionary ideas. Most of them have probably never really heard a clear, logical defense of the Christian faith that would answer many of their skeptical questions. It’s important to remember that God’s Word commands us to “sanctify the Lord God in your hearts, and always be ready to give a defense to everyone who asks you a reason for the hope that is in you, with meekness and fear” (1 Peter 3:15).

At the same time, it’s vital that we never divorce any arguments/defense we could present to atheists from the powerful Word of God: “So then faith comes by hearing, and hearing by the word of God” (Romans 10:17).

We do our best to defend the Christian faith using apologetics against the secular attacks of our day.

At Answers in Genesis, through our resources, conferences, and other outreaches, we do our best to defend the Christian faith using apologetics against the secular attacks of our day. But in doing so, we need to also point people to the truth of God’s Word and challenge them concerning the saving gospel. We use apologetics to answer questions and direct people to God’s Word and its message of salvation.

There’s no greater thrill in this ministry than to hear how God has used what has been taught by AiG to touch someone’s life—for eternity. Last week, I was introduced to one of our new volunteers, Donna, who is helping sew some of the costumes for the figures that will be placed inside our full-size Ark. She had responded to my Facebook post asking for seamstresses. 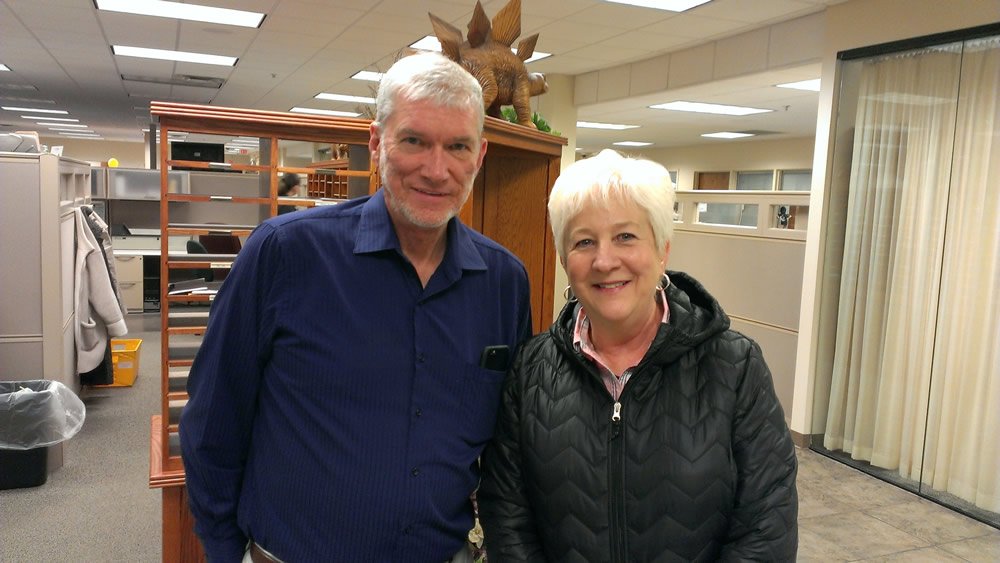 Donna with me in the AiG offices last week.

The Lord opened up this atheistic evolutionist’s eyes decades ago, through exposure to Ken’s ministry.

I was a die-hard evolutionist, completely convinced that the fossil finds in Olduvai Gorge supported the “evidence” that we evolved from less-complicated, early hominid creatures, like the so-called “Lucy".

To keep a long story short: I attended a Creation Seminar at Cedarville College [now Cedarville University], sat in rapt attention as Ken Ham told me “the rest of the story,” and I realized that all of the fossil finds I believed supported evolution were, in all cases, misinterpreted. I was blown away! So, learning the truth about evolution preceded my realizing that God was real (after all!) and that the Bible was His Word. I became a creationist before I became a believer in Christ.

I was raised and educated Roman Catholic. My parents took all seven of us to church every Sunday. And for all that religiosity, we never spoke of Jesus at home.

After twelve years of Catholic schools, and being taught that Noah's Ark, for example, was just an allegorical way to relay the story that “if you come on board with belief in God, he'll keep you through the storm,” that there probably was no actual Noah's Ark, and probably no actual Adam and Eve, it was easy to throw out the Bible as any believable “Word of God.”

But then being exposed to creation science ministries, I had to look honestly at what I'd come to believe about God. I can't name a specific date that I came to saving knowledge of what Christ had done for me—it was more of a season. I was that thick headed. It took a while for it all to unfold.

Today, I am feasting on apologetics, Christian music, and the inerrant Word of God. I never thought the Bible could make so much sense. Christ has loved and protected me through my years of doubt, even though I never deserved it. I know where I came from, and I know exactly where I’m going. I am free of the fears and superstitions of religion, because I have a deep, personal relationship with the most awesome Creator of the Universe!

By the way, my twin daughters are both graduates of Cedarville, and one is a pastor's wife!

I am so honored to be doing any little thing to make the presentation at the Ark Encounter come alive, and look forward to many more days helping with the sewing effort.

We were able to find some information on the 1993 seminar that she attended at Cedarville University; Cedarville is a university that has a close affiliation with AiG today. See a photo of me (with dark hair) on page 4 of Torch, summer 1993.

In explaining how we conduct apologetics evangelism at AiG, I like to use the account of Jesus raising Lazarus from the dead (John 11). When Jesus came to the tomb of Lazarus, He told people to roll the stone away. Now, Jesus could have moved the stone with one command—but what people could do for themselves, He asked them to do. Then what people couldn’t do, He did with a command—His Word. He raised Lazarus from the dead.

At AiG, we know that non-Christians are really walking dead people “who were dead in trespasses and sins” (Ephesians 2:1). Only God’s Word can raise the dead. So when we are witnessing to “dead” people, we do the best we can to give answers (1 Peter 3:15) to defend the faith, and in so doing, point them to the Word of God that saves! God is the One who opens people’s hearts (including atheists) and “who has shone in our hearts to give the light of the knowledge of the glory of God in the face of Jesus Christ” (2 Corinthians 4:6).

God’s Word reaches even the most hardened heart.

Yes, God’s Word reaches even the most hardened heart. There is hope for every atheist, for the Lord “is longsuffering toward us, not willing that any should perish but that all should come to repentance” (2 Peter 3:9). And “blessed be the God and Father of our Lord Jesus Christ, who according to His abundant mercy has begotten us again to a living hope through the resurrection of Jesus Christ from the dead” (1 Peter 1:3).

If the Lord has used AiG, including our Creation Museum, in your life to bring you to salvation, would you please let me know? Thank you.