God Makes Dreams Out of Nothing

Who would have ever thought that an invitation to lunch in a 150-year-old log cabin would lead to the beginnings in earnest of a massive project that has the potential to shake the world?

When Ken Ham was speaking in Ohio at one of the first meetings organized under the auspices of the (then) new Answers in Genesis ministry in the US (which Ken founded and heads), Buddy and Kay Davis were sitting in the audience. At the end of the program, Buddy shyly introduced himself to Ken and mentioned that he sculpted dinosaurs. Ken remembered that Creation magazine had, a few years earlier, featured an article about this man from the backwoods of Ohio and his dinosaurs. Buddy and Kay were surprised when Ken and others from AiG willingly accepted their invitation to come back to their log cabin for lunch.

As he showed Ken the numerous very high quality dinosaur sculptures, together with his large collection of taxidermy specimens (he is a trained taxidermist by trade), Buddy shared that he and Kay had an intense burden to have these dinosaur models placed in a creation museum that gave honour and praise to the Creator God. Ken shared with Buddy the vision he and others had had for many years to see a major creation museum complex that would shout to the world that the Bible is true history and proclaim the Gospel. No wonder Ken’s eyes, seeing these world-class specimens, were like those of a child in a candy shop!

At the time, Ken did not know that Buddy was also a songwriter and very accomplished musician. Seeing a guitar hanging on the wall, he asked Buddy to play a song. After some persuasion, Buddy played and sang one of his own compositions called He Makes Dreams Out of Nothing.

At the end of the song, Ken reminded Buddy that their meeting on this day was not by chance, but ordained by the Sovereign God. ‘Let’s build this creation museum, Buddy,’ Ken said, ‘and at the opening ceremony, I want you to sing this same song—He Makes Dreams Out of Nothing.’

Buddy (with Kay) is now involved full-time in the AiG ministry, singing and speaking all over the world. And what of the creation museum project? Not only has it received worldwide publicity, but it is well on the way to becoming a reality.

The Lord has miraculously opened so many doors for this exciting project that one can only exclaim with the psalmist, ‘For the LORD is great, and greatly to be praised: he is to be feared above all gods’ (Psalms 96:4). It has also been a phenomenal spiritual battle—a story of intrigue. The excitement is building—let us share with you how this ‘dream out of nothing’ looks like being realized. Within two years, God willing, a world-class centre promoting the Bible as the true history of the world will be built on a strategically located piece of property near Cincinnati, Ohio, USA.

The Creation Museum and Family Discovery Center will be an 8,500 m2 (95,000 sq. ft) facility that will also become the new headquarters for Answers in Genesis–USA. Asked to share more of the background, Ken said:

‘When visiting many secular museums around the world, I’ve watched thousands of children gaze with wonder at evolutionary displays which were, sadly, indoctrinating them in humanistic, anti-God thinking. 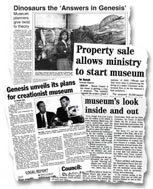 ‘I still see in my mind a father, standing in front of a model of “Lucy” (an ape-like alleged “pre-human”) at the British Museum of Natural History, telling his young son that this was their ancestor. Unfortunately, I’ve seen similar heart-wrenching things many times over the years.’

Though it is intended to rival them in quality, the Creation Museum will be different from other natural history museums. AiG wants to proclaim loudly that the Bible explains the true history of the Earth, and that the history on which the Gospel of Jesus Christ is based is true. Ken says, ‘We want to show the world that the Bible can be trusted, and that it has the answer to where we came from, who we are, and how to live with our Creator for eternity.’

The choice of the Cincinnati metropolitan area for this international complex was no coincidence. For a ministry to reach the rest of the world most effectively, it is logical for it to be located in America, which is the hub of the business and Christian worlds.

The Cincinnati/Northern Kentucky region in which the museum will be built has a large international airport and is central to the major population centres of America. It is within a day’s drive, or about a one-hour flight, of more than 180 million people in the US and Canada.

A short time after Buddy had decided to turn his dinosaur collection and singing/sculpting talents over to the ministry, AiG tried to rezone a piece of property for the museum outreach. Secular humanists in the area attempted to censor the project. Ironically, the group that spearheaded the opposition to the museum was called Free Inquiry; supposedly supporters of freedom of expression. Others said some incredible things—Ken was likened to cult/suicide leader Jim Jones, the ministry was called a branch of the infamous Dave Koresh cult in Waco, Texas, and so on.

But out of this came a tremendous blessing. Much of the world’s major media covered the story. AiG’s library has many binders full of newspaper articles and correspondence about these attacks on the ministry. In a very real way, this massive publicity caused enormous growth of the AiG ministry in America. 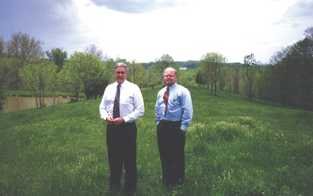 Mark Looy and Mike Zovath, senior executives with AiG-USA since its inception in 1993.

In the event, the county officials denied this rezoning application. ‘However,’ said Ken, ‘The Lord simply led us to another piece of property that was even better. It has 375 metres (1,250 feet) of frontage along one of America’s interstate highways (I-275), just two exits away from Cincinnati’s major airport. Its 47 (mostly level) acres feature a beautiful spring-fed lake and thickly wooded areas. For a museum that will proclaim creation over evolution, you couldn’t ask for a better piece of property!’

‘A supporter in Maryland contacted us two years ago to inform us that a museum in Baltimore was closing down,’ Ken continued. ‘It had spent $17 million on its exhibits. Before we left for the auction, we decided we would spend $20,000 to buy displays. Well, we walked away with over half the exhibits—literally millions of dollars’ worth—for just $19,000! It was one of many miracles in the history of this museum project.’

Once the museum is open, visitors will first walk onto a 900 m2 (10,000 ft2) display area. They will experience a thrilling ‘walk through the history of the world’ from beginning to end. Visitors will also learn to put on ‘Biblical glasses’, i.e. to understand how to correctly view the universe through the lens of Scripture, rather than the secularized lens of our evolutionized culture.

But that’s not all. They will then move on, to an area three times larger, with a ceiling about 12 metres (40 feet) high. There they will be able to see Buddy Davis’s huge dinosaur models, with pterodactyls ‘flying’ above, as well as some of the superb Baltimore exhibits. Three are so large that you can walk through them, with touch-screen audiovisual commentary. There will be a Noah’s Ark model, aquariums, and many other stunning exhibits, all proclaiming Biblical authority and accuracy in powerful, up-to-date ways.

Though it is being built in America, this complex is truly an international outreach. Not only because of the potential ‘flow-on’ benefits from its effect on the US church, but also because people from all over the world, who may never be able to visit America, will be able to take a ‘virtual tour’ of AiG’s museum on the internet. These web visitors will receive the same Bible-proclaiming and evangelistic messages!

Of course, updates will be printed in future publications—by the time this article is printed, there may already be more thrilling developments. The best way to follow the progress of this exciting project will be on a special section of our website that you can go to by simply logging on to <www.creationmuseum.org>. 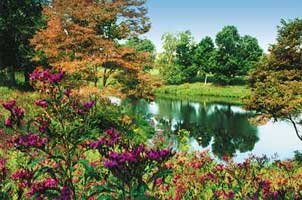 The picturesque land on which the Center will be built, affirming to the world that God is Creator and His Word is true.

For a project of this size and quality, the projected price tag of $14 million is actually rather low. This is because the ministry is using what is called a ‘gifts in kind’ approach. For example, AiG’s architects, A.M. Kinney Associates, donated a significant part of their time. Ken says, ‘We’re trusting that we can find other construction-related businesses to donate a good portion of their services to this project.’

Asked for a final word on the urgent need for such a Creation Museum, Ken said: