Geri Campbell had just finished her first performance of Eve Remembered, a one-act play she wrote and performs with her daughter in churches and at Christian conferences. Though she wanted to equip people with a better understanding of sin’s origin, she was surprised to see so many tears in the audience’s eyes.

A woman wept as she explained, “I was overcome with my own sin. I was so aware that I was a sinner in need of a Savior.” 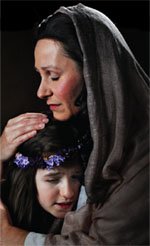 Geri originally wrote the play to answer the common question, “If a loving God exists, why is there so much suffering?” She was burdened to reach hurting atheists and Christians who simply can’t see that the reason for our pain lies at the feet of Adam (and the rest of us whom he represented)—not God.

Clearly this question reaches deep into the heart, not just the mind.

Eve Remembered offers a glimpse into what may have happened in Eve’s life after she and Adam disobeyed God. In this very personal and emotional portrayal, Eve is wrenched by her suffering, by the animal sacrifices she regularly endures, and by the devastating loss of her son Abel. She blames God, as many people do, but comes to realize that the cause of her distress is her own sin.

Eve’s agonized longing to see God fulfill His promise in Genesis 3:15 grips the audience. Geri wants people to understand that “God’s promise to Eve—restoration—is available to us today. He made a way for us to come back to Him through the blood of Jesus Christ.”

God has blessed Geri’s willingness to surrender her gifts as a writer and actress in His service. The audience response shows clearly that the first chapters of Genesis have immeasurable power to move people to realize the effects of their own sin and their desperate need for salvation in Christ Jesus.

Previous Article Not All Fun and Games Next Article Where’s the Love?