We live in a time when it seems the basic ABCs of Christianity are not being taught in America as they once were.

Check out our new DVD!

When we think about learning our ABCs, the alphabet and the basics of language come to mind—all vital for communication.

Well, we live in a time when it seems the basic ABCs of Christianity are not being taught in America as they once were.

Over the years, I’ve met many people who teach Sunday school (or lead a youth or adult Bible study) who have told me that so much of their material now seems so watered down. In fact, as someone said to me, “I’m tired of the fluff and stuff.”

Indeed, as we have examined much of the currently available curricula being used for Sunday schools, youth outreaches, adult Bible studies, and so on, a lot of it waters down the basic truths of the Bible. And much of it concentrates on spiritual aspects, relationship building, and devotional thoughts (of course, some of that is needed, but it’s in much heavier doses today). 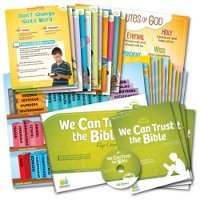 All ages will be taught chronologically through the Bible, and will be equipped to answer the skeptical questions of this age.

The 2009 “Beemer Study” (from America’s Research Group) helped explain why two-thirds of young people are leaving the church by college age. (The study became the basis of our best-selling book Already Gone.) Britt Beemer discovered that young people are beginning to doubt the truth of the Bible at a much younger age than we all believed.

The research concluded that even Biblebelieving churches were not teaching their children and adults how to use apologetics to defend the faith, so that they wouldn’t be intimidated by the attacks of the world against Christianity.

At the same time, most churches and Christian homes have tended to treat the Bible as a book of stories; in today’s vernacular, the word “story” is often taken to mean a fairy tale.

As a result, recent generations have been doubting the Bible’s history. This doubt leads to unbelief. No wonder we are seeing such a massive exodus of youth from our churches.

In response to the alarming exodus, many church leaders have tried to make curricula more entertaining. But all it does is water down the content.

It’s our contention, based on the response to our well-received summer VBS programs, that children don’t want “fluff and stuff.” In addition, our other “meaty” materials for teens and adults have shown the same thing. People want answers—real answers—so they will know they can trust the Word of God in its recorded history and thus trust the Bible in what it says about the gospel.

We’ve discovered that whatever the age, people need to be taught the basics of Christianity in a way that enables them to not only understand what they believe and why, but how they can logically defend the Christian faith in this increasingly hostile secularized world.

In response, AiG has committed to stepping out in faith to produce a basic but powerful “ABC” approach to deal with this problem. I am excited to announce that we are releasing our Answers Bible Curriculum.

As far as we can determine, there is nothing truly like this curriculum anywhere in the world. It is a totally integrated, three-year curriculum from kindergarten through adult. It emphasizes:

A Apologetics. In a practical way, all ages are equipped to answer the skeptical questions of this age, which are used in an attempt to get people to doubt the authority of God’s Word (leading to unbelief ).

B Biblical authority. All ages are taught chronologically through the Bible (with continual references to the New Testament) as they are taught how to build a Christian worldview based on Scripture. Yes, real meat! Our field tests of this curriculum have already shown that even young children love the “meaty” content!

C Christ centered. At every age level, people are taught to focus on Christ and His gospel message. Even when we study Bible characters, we exalt God and His attributes instead of teaching mere moralism.

I urge you to teach the ABCs of our Christian faith in your home, Sunday school, youth group, Bible study, homeschool, and Christian school. This curriculum will be suitable for everyone!

See the special insert stapled inside the middle of this newsletter for details on this thrilling new ABC program!

Previous Article An Uncertain Sound Next Article Whatever You Do . . .