It was just over 20 years ago that my father built a small model of Noah’s Ark and was planning to give it to me a few weeks later, during a visit I had planned back to Australia. That scale model of the Ark is now found in a small exhibit inside our Creation Museum. We titled it “Legacy.”

Along with my father’s Bible (showing his copious notes), inside the display is his handmade Ark and a photo of my father and mother, with short video clips of my father. This exhibit is meant to challenge our museum visitors concerning what legacy they will leave their children when they depart this planet.

The Answers in Genesis ministry, including the Creation Museum and the future Ark Encounter, are really the legacy from parents who instructed their children to stand uncompromisingly and unashamedly on the authority of God’s Word. My father diligently taught us to defend the Christian faith against the secular attacks of our day. When I was only about 19 or so and attending university in Australia, I remember the time our church handed out a booklet to the congregation. It contained a devotional about the Flood of Noah’s day, but it stated that the Flood was just some local, not global, event. I remember my father, a schoolmaster, becoming quite upset with the false teaching. He had made sure our family understood that the Bible clearly taught a global Flood.

My father led somewhat of a crusade to lovingly but firmly confront the booklet’s publisher (a fairly conservative organization theologically). He saw the booklet’s teaching as an attack on the authority of the Word of God.

That incident really stuck in his mind. My dad was burdened that people in the church were being led astray by secular teaching. It wasn’t long after this event that the Lord led me to obtain a copy of the famous book The Genesis Flood by Drs. Henry Morris and John Whitcomb. My father was thrilled to learn about The Genesis Flood. The scientific and biblical answers given in that classic book really resonated with him. He knew that the compromised teaching he read in the devotional booklet was an attack—coming from inside the church—on God’s Word.

Defending the historical accounts of the Flood and Ark was very important to my father, and he knew it was to me as well, of course. After all, I was involved in a ministry of biblical apologetics. My dad was so thrilled with the ministry the Lord had called us to. He had already witnessed the tremendous impact of the creation/ gospel ministry in Australia, and then he saw the wonderful blessings of our ministry in the USA after we moved here in 1987.

As I was planning one of our trips back to Australia in 1995, my dad was making this Ark model. Now, he was not a craftsman but an educator, yet he did a fine job. The Ark model represented the stand that not only he took on the authority of the Word of God, but mine as well.

Tremendous progress is being made in the building of a life-size Ark in Northern Kentucky, 40 miles from the Creation Museum.

Want to visit the construction site and, from a special observation cabin, have a once-in-a-lifetime opportunity to see the wood going up?

Go to ArkEncounter.com for details!

My parents owned a small house with a swimming pool. My father was very excited about my upcoming visit in 1995. He obtained small American and Australian flags to place on this Ark model, and he was planning to have it floating in his pool when I came to visit.

Sadly, in June 1995 Dad passed away, just before he was to “launch” his Ark. Instead, it was my mom who placed the Ark, with the flags, in the pool.

So this Ark model is very special to me. It represents the spiritual legacy of a father.

Just as the Lord burdened him to make this Ark for me, now I, along with my colleagues, am burdened to have Answers in Genesis build a life-size Noah’s Ark. This Ark will challenge the world concerning the truth of God’s Word and the gospel. Research indicates up to two million people a year will come to this 510-foot-long Ark in Northern Kentucky! I truly believe it will be one of the greatest evangelistic outreaches of our day.

I thought it would be fitting, 20 years after my father’s passing, to share this photo (below). It was taken at the Ark’s construction site. My wife and I are standing with some of the giant glulams (i.e., laminated beams) that are part of the 166 ribs for the Ark structure. In the background you can see the three towers under construction that the Ark will anchor to, as well as many of the 102 piers it will sit on. 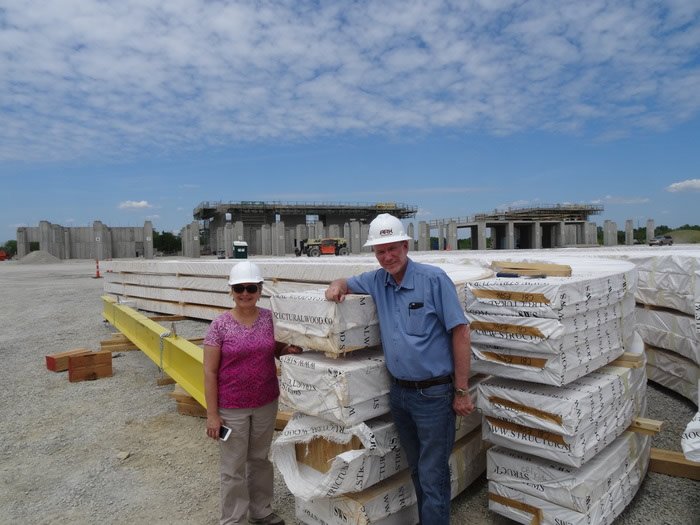 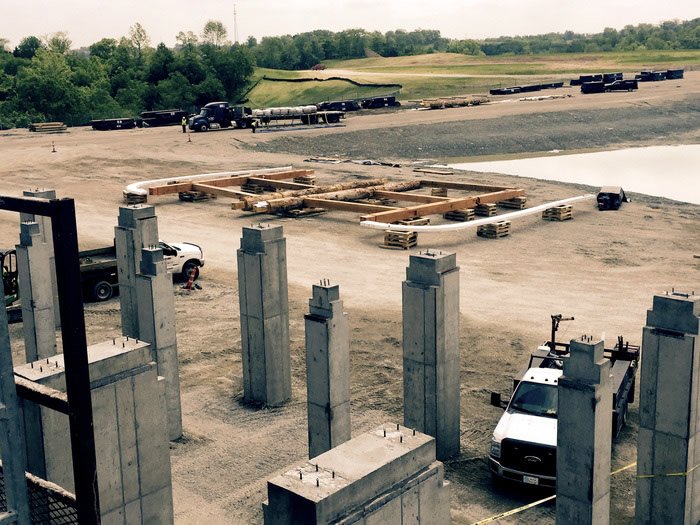 Mally and Ken Ham at the Williamstown, Kentucky Ark site. Huge wooden beams were arriving and being placed on foundation piers (right) last month. The wood on the ground and near the lake is called a “bent,” and was about to be lifted by a crane onto the piers as we went to press.

At the site recently, I was reminded of Hebrews 11:7:

By faith Noah, being divinely warned of things not yet seen, moved with godly fear, prepared an ark for the saving of his household, by which he condemned the world and became heir of the righteousness which is according to faith.”

I praise the Lord for godly parents who determined to leave a legacy for the next generations, so that our family members might be saved by a modern-day Ark of salvation, Jesus Christ. And sharing Christ is what this exciting life-size Ark project is all about!

Previous Article Ark Encounter Estimated to Attract at Least 1.4 Million in First Year Next Article We’re Getting a Taste of Noah’s Day