Billboards Engaging Atheists Up in Times Square and San Francisco

Several billboards in prominent locations across the country invite atheists to find hope in God.

Residents and tourists in New York City and the San Francisco Bay Area can view new unique billboards this morning, with Los Angeles and Hollywood following in a few days with several similar boards. Answers in Genesis (AiG), sponsor of the billboards, is engaging atheists and other secularists with a cordial message that encourages them to visit AiG’s website to read articles and watch a video that present the case for God’s existence. 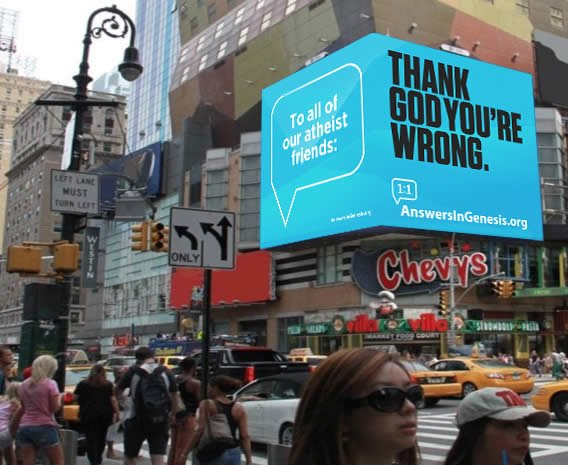 Today, one large “digital spectacular” in Times Square in downtown Manhattan and three billboards in the Bay Area are proclaiming the message: “To all of our atheist friends: Thank God you’re wrong.”

Ken Ham, president of AiG and the Creation Museum, stated:

In a friendly way, we want to reach out to people in secularized parts of the country and share the hope we have in Christ. Atheists live in a world of ultimate meaninglessness and purposelessness. But the good news is that God sent His Son to offer the free gift of salvation. There is purpose and meaning in life. And we thank God for that.

When visitors go to AiG’s website, they will see AiG’s article “How Do We Know There Is a God?” and one of Ham’s videos.

With the Times Square “digital spectacular,” the animated image will be visible for 15 seconds every 2 minutes. Located at 42nd Street and 8th Avenue in the heart of Manhattan, it measures a whopping 45 feet by 90 feet.

Across the country in California, a billboard went up today in the state’s third most popular tourist attraction: Fisherman’s Wharf in San Francisco. The second of three Bay Area boards is now visible at the heavily travelled east entrance of the Bay Bridge.

This is the board that was posted at San Francisco’s Fisherman’s Wharf this morning.

In the Los Angeles area, 6–7 billboards will soon be posted this month. AiG obtained two high-profile static bulletins on Sunset Boulevard, which are superb locations. Another board is on the busy Santa Ana Freeway, one of the most highly trafficked freeways in all of America.

According to AiG’s agency of record, JDA, there will be at least 17 million impressions over the next several weeks as drivers and pedestrians see these striking boards. View the 15 second Times Square digital video board below:

More than ever, people are asking us to prove that there is a God. I tell them our faith is not a blind faith but a reasonable one. Furthermore, Romans 1:20 says that the creation of the world by God is so clearly seen that none of us has any excuse for rejecting God. At the same time, AiG understands that atheists like Richard Dawkins look at the same evidence and interpret it differently in light of their humanistic worldview. But theirs is not a reasonable faith.

People can learn how to sponsor a billboard or two in their area by emailing JDA.

This billboard project to reach atheists and agnostics is an outreach of the apologetics organization of Answers in Genesis. The AnswersInGenesis.org website has been voted “Best Ministry Website” two times, as determined by the National Religious Broadcasters. (The site attracts over 1 million web visitors a month.) Its Answers magazine has twice picked up the highest award for magazine excellence by the Evangelical Press Association. AiG’s high-tech Creation Museum has drawn 2 million visitors in six years, and next year AiG will start construction on a full-size, all-wood Noah’s Ark.