Down Down, or Up Up?

Much to the consternation of many secularists, the full-size Noah’s Ark is going up up! Why the “up up” reference?

You see, secularists who oppose the ministry of AiG (and oppose anything Christian, actually) want to see the Creation Museum and Ark Encounter project go down, and they will make up stories about our supposed demise and spread them through the Internet. One secularist blogger recently wrote a piece with the headline: “KEN HAM’S ARK IS GOING DOWN, GOING DOWN, GOING DOWN.”

But late last year it came out that Ham and his organization were losing money at the Creation “Museum” (thanks to sagging attendance after 5 years) and using junk bonds to make the financing work . . . .

I’m sure the con man Ham will continue to lead people on, but since his junk bonds have no guarantees, all the investors will be stuck with nothing. However, if he does have a lot of his financing tied to mortgaging his Creation “Museum,” it could bring the whole house of cards crashing down. Whatever the true financial strength of Answers in Genesis, the Ark Park is dead in the water and sinking fast.

What utter fiction! This blogger isn’t inside the AiG organization. He doesn’t know our accounting staff, advancement department, architectural team, engineers, and the many who are a part of the massive team that oversees Answers in Genesis and the various outreaches of this ministry.

Such doomsday-predicting secularists have no idea about the construction of a project of this size—what it takes to get permits, the true nature of the professionally conducted bond offering for the Ark, attendance at the museum, and so on.

The Creation Museum attendance has been outstanding this year (as anyone who has visited us in 2014 already knows!) and every year has exceeded projections we set in 2007. So why do these secularists post and print such nonsense? I believe that they have become so anti-Christian, they hope that by making up doomsday stories about AiG, the Creation Museum, and the Ark Encounter project, some people will stop coming to the museum or cease supporting us financially.

As always, however, when it comes to the things of the Lord we should remember this passage: “But as for you, you meant evil against me; but God meant it for good, in order to bring it about as it is this day, to save many people alive” (Genesis 50:20).

And praise the Lord: many souls have been saved as a result of God using the AiG ministry.

We also truly believe the Lord will use the full-size Noah’s Ark and all its incredible exhibits to reach millions of souls with the truth of His Word and the gospel. Yes, the great wooden structure is on its way up, up, up! 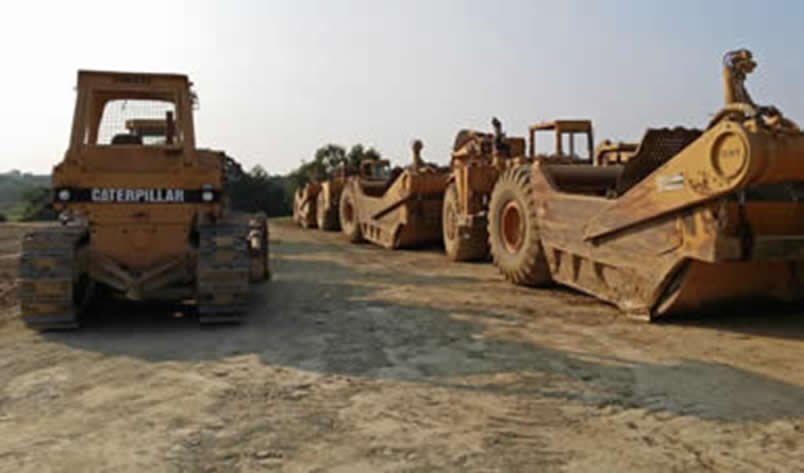 Here is some of the heavy equipment working at the Williamstown site (south of Cincinnati) as we prepare to excavate and build the foundation for what will be the largest timber-frame structure in the world.

“Separation of Church and State”?

Another myth about the Ark Encounter that needs to be squelched is the claim that the preliminary approval granted by the state to the Ark Encounter for a performance-based sales tax refund is a supposed violation of “separation of church and state.”

You see, when the Ark opens and is fully operational, we have the opportunity to have some of the sales tax we collect (e.g., paid on food, tickets, and resources purchased within the park) refunded to us, to a maximum-approved $18.25 million over 10 years, through the state’s Tourism Development Act.

Even an attorney with the American Civil Liberties Union of Kentucky told the newspaper USA Today in 2010 that the state’s Tourism Development Act should be non-discriminatory towards the Ark Encounter. This ACLU lawyer stated that “courts have found that giving such tax exemptions on a non-discriminatory basis does not violate the establishment clause of the First Amendment, even when the tax exemption goes to a religious purpose.”

AiG would further suggest that it would be illegal for the state to engage in some form of viewpoint or religious discrimination simply because the content of the Ark Encounter happens to focus on biblical history. In addition, the state is not compelling anyone to visit the Ark Encounter, thus there is no “establishment of religion” with the Ark Encounter and its proposed sales tax refund.

The granting of sales tax refunds to the Ark Encounter is, as the TDA requires, for a legitimate public purpose: the promotion of economic development in Kentucky which would otherwise not be available if the project would be built in another state. The Ark Encounter, which was courted by other states, decided on building in Kentucky because of the prospect of getting a refund of sales tax we collect once we open in 2016.

No money from the state budget is being used to build the Ark.

Offering such an incentive like a refund of sales tax in an effort to draw projects to be built in a state is a common practice. No money from the state budget is being used to build the Ark. The performance-based refund is offered because a project will bring millions of dollars into the state budget, not take away from it.

Yes, the Ark is going UP, UP, UP, UP. And you can keep UP-to-date at ArkEncounter.com.