How Old Is the Universe?

This is Ken Ham, an Aussie transplant with a passion for sharing the truths of God’s Word. 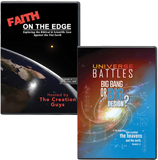 How old is the universe? Well, from a secular standpoint, the answer depends on which study you read—because they can’t agree!

We can confidently know the age of the universe because Scripture gives us the true history of the universe. God created everything in six days, and based on genealogies—and dateable events—in the Bible, we know that was about six thousand years ago.