This is Ken Ham, hoping you’ll visit our life-size Ark south of Cincinnati. 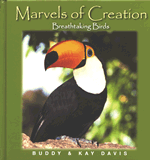 There’s an old saying that goes, “If it looks like a duck and sounds like a duck, well, it’s a duck.” Evolutionists are struggling with this idea after a fossil specimen from Antarctica appears to be a duck.

You see, based on evolutionary dating, this duck existed with dinosaurs—before ducks supposedly evolved. Now, many evolutionists angrily argued there’s no way it’s a duck. But researchers studying it insist it’s a duck.

Evolutionists will always struggle with these “out-of-place” fossils. You see, their worldview imposed on the fossil record is all wrong.

Now, in a biblical worldview, this duck isn’t a problem. Dinosaurs and birds lived together at the same time and were buried during the flood.