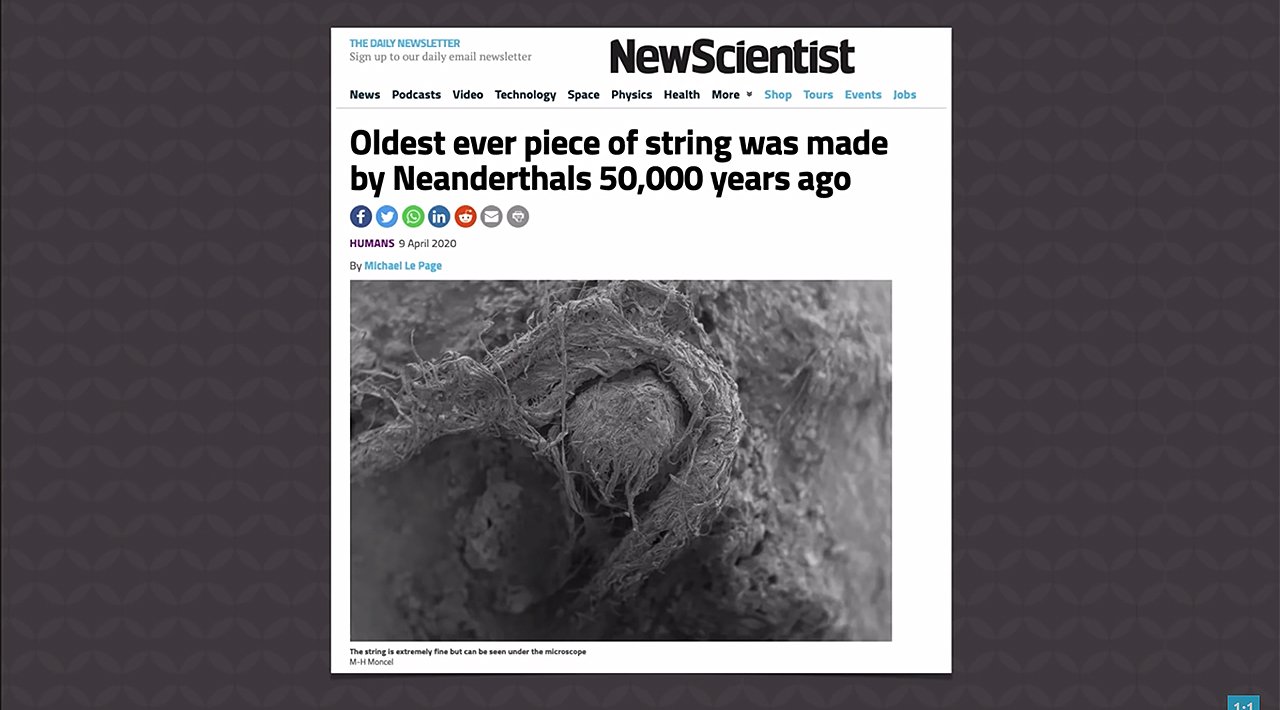 When Neanderthal fossils were first found in 1856, they were considered to be primitive, brutish cavemen, and exhibits in museums modeled them as part ape and part human. Now, creationists have insisted Neanderthals were 100% human and lived during the ice age after the flood. Over time, evolutionists have had to admit they were wrong as Neanderthals buried their dead, made musical instruments, tools, and jewelry, and did cave paintings. And now, evidence suggests they made cords.

A popular summary of the find says the discovery of a tiny, microscopic bit of string attached to a stone flake fragment suggests, “Neanderthals knew how to twist [inner bark] fibres together to make cords—and, if so, they might have been able to craft ropes, clothes, bags and nets.”

The lead author of the paper says he “thinks the string shows that Neanderthals were as smart as us” and another expert was quoted as saying, “they were very similar to us . .  . Neanderthals engaged in complex behaviours that we thought they weren’t capable of.” But creationists have been saying this all along!

If scientists had believed the Bible's account of history concerning creation and the flood, they would not have been led astray by the anti-God religion of evolution and come to such a false view of Neanderthals.

The scientific paper, published in the journal Nature, says, “The idea that Neanderthals were cognitively inferior to modern humans is becoming increasingly untenable.”

If scientists had believed the Bible's account of history concerning creation and the flood, they would not have been led astray by the anti-God religion of evolution and come to such a false view of Neanderthals. When we start with God’s Word, what we observe in the world makes sense! Evolutionary thinking can hold back science.

As has happened numerous times, evolutionists have been shown to be wrong!

I discussed this item today on Answers News with cohosts Dr. Gabriela Haynes and Bryan Osborne. Answers News is our weekly news program conducted here at the Creation Museum and broadcast on my Facebook page and the Answers in Genesis Facebook page. We also covered the following topics:

Watch the entire episode of Answers News for April 20, 2020.