Sailing the Mediterranean? So Easy Even a Caveman Can Do It! 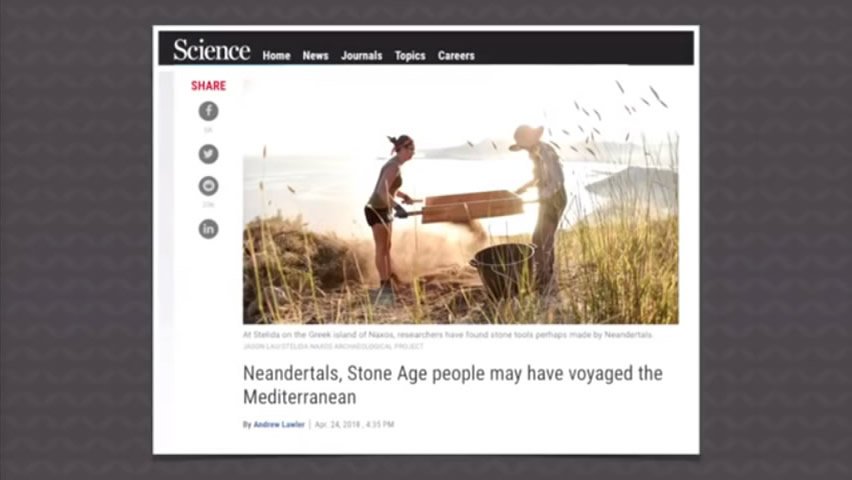 Evolutionists couldn’t have been more wrong about Neanderthals. When this human variety (now considered by evolutionists to be a cousin to modern man) was first discovered, they were considered primitive and brutish, hence the insult of calling someone a “Neanderthal.” Many museums still depict Neanderthals in this fashion. But nothing could be further from the truth.

Further research has shown that Neanderthals buried their dead with rituals, made and wore jewelry, wore cosmetics, played instruments, and even had children with “modern” humans. In other words, they were human, highly intelligent, and creative, just like us. The evolutionary interpretation, based on the evolutionists’ worldview, was really, really wrong. Yet, because of their dating methods (which have continually been shown to be unreliable), evolutionists still refuse to accept that Neanderthals are simply a variety of human.

The evidence keeps mounting for the intelligence and ingenuity of these people. Two recent studies highlight this. One study found that Neanderthals may have been seafarers, setting off across the Mediterranean Sea for new lands. Researchers base their conclusion on tools that supposedly belonged to Neanderthals on islands throughout the Mediterranean. One archaeologist says,

The orthodoxy until pretty recently was that you don’t have seafarers until the early Bronze Age. . . . Now we are talking about seafaring Neandertals. It’s a pretty stunning change.

Another study found that a Neanderthal in Crimea may have left a message etched in a small piece of flint, brought from far away. The researchers believe the marks in the flint show fine hand-eye coordination and attention to detail and may perhaps have symbolic meaning.

Because evolutionists have the wrong starting point regarding origins, they will come to the wrong interpretation of the evidence. In a biblical worldview, Neanderthals were descended from Adam and Eve, through Noah, and made in God’s image, just like us. They didn’t live hundreds of thousands of years ago; they lived after Noah’s flood, eking out a living during the harsh conditions of the post-flood ice age.

We still don’t know why this lineage died out, and there’s still much to learn about their culture and practices. However, when we start with God’s Word, their origin and place in history is no mystery.

This item was discussed on Answers News today with regular cohosts Bodie Hodge and Dr. Georgia Purdom and regular guest Avery Foley. Answers News is our twice-weekly news program filmed live before a studio audience here at the Creation Museum and broadcast on my Facebook page. They also discussed the following topics:

Be sure to join us each Monday and Thursday at 2 p.m. (EDT) on my Facebook page for Answers News. You won’t want to miss this unique news program that gives science and culture news from a distinctly biblical and Christian perspective.