Neanderthals Fed and Weaned Their Children Just Like Us 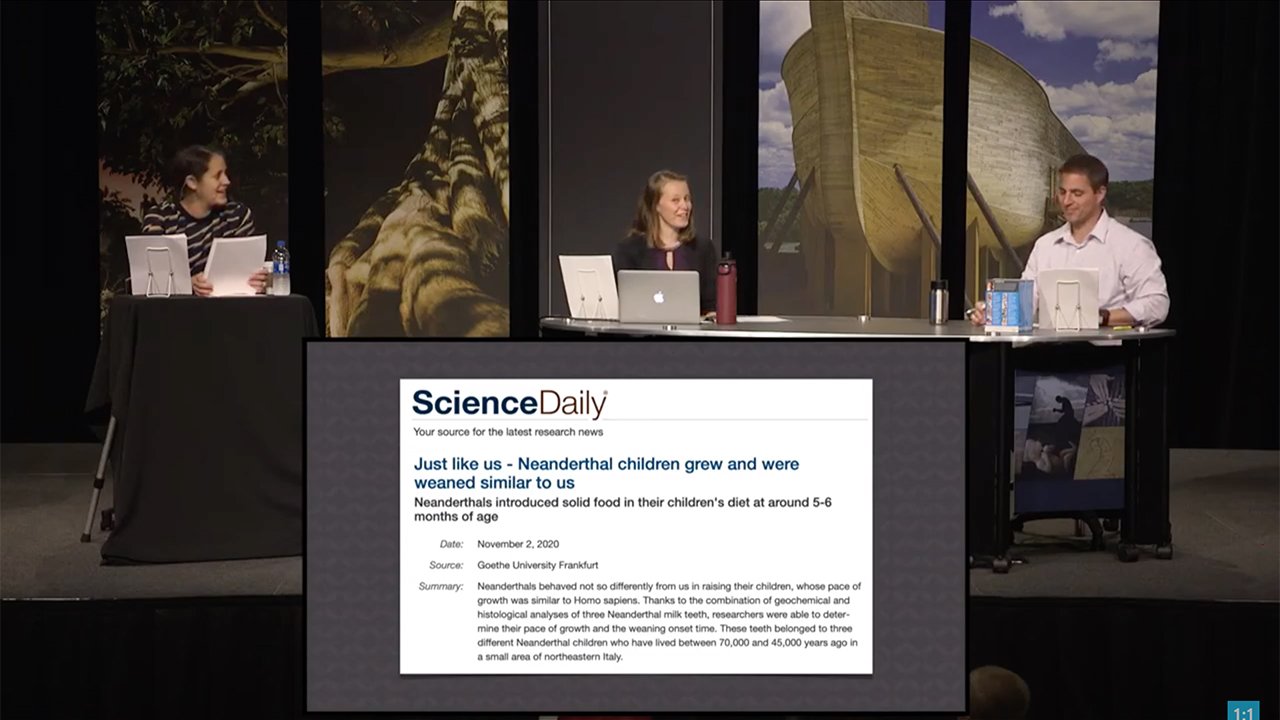 So many people today think of Neanderthals in the classic evolutionary sense—primitive brutes, grunting to communicate with one another and wielding clumsy stone tools. But that evolutionary depiction—still haunting the general public—is far from the reality that further investigation has uncovered. Ongoing research actually reveals what creationists have predicted: starting with the Bible, we know Neanderthals were humans, like us, from the beginning.

In just the last decade or so, we’ve reported on findings that Neanderthal people made bone instruments, wore jewelry and makeup, heated and organized their homes, had children with modern man, dove for clams and other shellfish, and more. Well here’s a new one to add to the list—Neanderthals started feeding their babies solid food and weaned them at about the same time modern humans do.

A new study of the teeth of three young children revealed that “Neanderthals behaved not so differently from us in raising their children, whose pace of growth was similar to Homo sapiens.” Based on this tooth study, the researchers concluded that Neanderthal infants started eating solid food at about 5–6 months of age, the same age that most children today start snacking on purees and softened whole foods.

This work's results imply similar energy demands during early infancy and a close pace of growth between Homo sapiens and Neanderthals. Taken together, these factors possibly suggest that Neanderthal newborns were of similar weight to modern human neonates, pointing to a likely similar gestational history and early-life ontogeny and potentially shorter inter-birth interval.

The research, particularly on one isotope signature (strontium), indicated that this particular population “spent most of the time close to their home: this reflects a very modern mental template and a likely thoughtful use of local resources.” Again, they weren’t that different from us.

The early evolutionary interpretation of Neanderthals was utterly wrong—yet it was presented as fact in museums, school textbooks, and the media. And their interpretations are still wrong today. These people didn’t live tens of thousands of years ago and they aren’t our evolutionary cousins. They were humans, descended from Adam, and made in God’s image. Neanderthals were our relatives. They simply reflect some of the variation in mankind.

This item was discussed today on Answers News with cohosts Avery Foley, Dr. Gabriela Haynes, and Bryan Osborne. Answers News is our weekly news program filmed live before a studio audience here at the Creation Museum and broadcast on my Facebook page and the Answers in Genesis Facebook page. We also covered the following topics:

Watch the entire episode of Answers News for November 9, 2020.

Previous Article “Living Room Reset” with Kirk Cameron at the Ark Encounter, November 19 Next Article “The Bible: All You Need to Know” Webinar, December 5, 2020