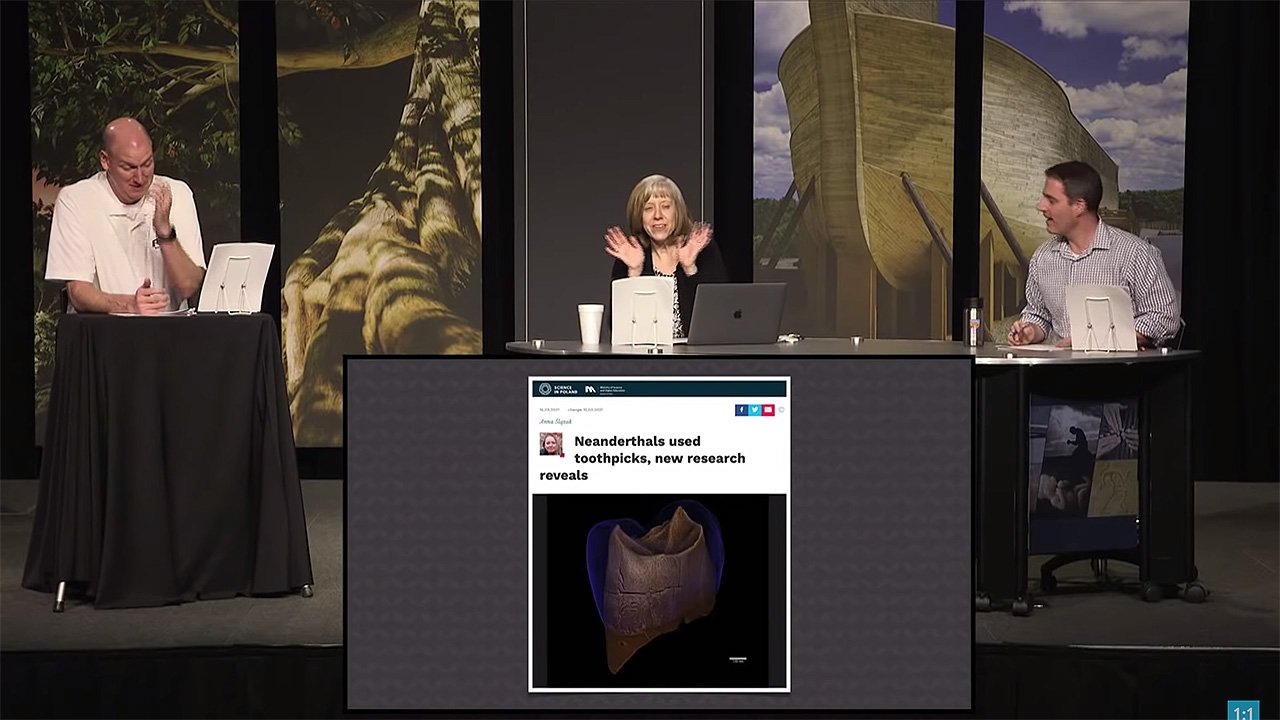 And the discoveries continue! What do I mean? Well, it seems that every few weeks there’s another story in the news about a new discovery highlighting just how “like us” Neanderthals were. They wore jewelry and makeup, made musical instruments and tools, caught and ate fresh shellfish, could hear like us, and this newest discovery adds yet another thing to the list: they used toothpicks and practiced oral hygiene. The picture of who Neanderthals were has totally changed since I went to school and was taught they were primitive brutes!

Scientists studying two teeth found in a cave determined that the owner of the teeth fashioned and used a toothpick often enough to “leave a clear trace.”

It appears that the owner of the tooth used oral hygiene. Probably between the last two teeth there were food residues that had to be removed. We don't know what he made a toothpick from—a piece of a twig, a piece of bone or fish bone. It had to be fairly stiff, cylindrical object, which the individual used often enough to leave a clear trace.

Neanderthals were human, just like us. They weren’t unintelligent brutes—a popular perception that lingers in the minds of many and often in museums.

It’s yet another reminder that Neanderthals were human, just like us. They weren’t unintelligent brutes—a popular perception that lingers in the minds of many and often in museums. All the evidence points to their humanity. And the evidence just keeps coming! It’s dramatically changed the way most scientists think about Neanderthals, and yet, the past, very wrong, perceptions, steeped in evolutionary thought, still hang around.

Every time I see a new report about yet one more very humanlike feature of Neanderthals, I’m reminded that the Bible’s history is true and evolutionary ideas are wrong. You see, when the bones of Neanderthals were first discovered, they were assumed to be our evolutionary relatives, but not fully human. But those who started with God’s Word knew the truth—these were the remains of humans and therefore they were people made in the image of God, descended from Adam and Eve. And, eventually, the evidence confirmed exactly what we’d expect starting with God’s Word.

It’s a good reminder that the evidence, when properly interpreted, will always confirm God’s Word. So next time you see something that appears to contradict the history in God’s Word, remember Neanderthals and the avalanche of evidence that did not confirm evolutionary expectations but confirms the Bible’s history. Man’s fallible ideas change, but God’s Word never changes.

This item was discussed on Wednesday on Answers News with cohosts Dr. Georgia Purdom, Tim Chaffey, and Bryan Osborne. Answers News is our weekly news program filmed live before a studio audience here at the Creation Museum and broadcast on my Facebook page and the Answers in Genesis Facebook page. We also covered the following topics:

Watch the entire episode of Answers News for March 31, 2021.