Two eyes are better than one. There’s more truth to that saying than you might realize.

One-eyed, humanlike creatures have been the subject of fantasy for centuries—from epic tales of the hulking Cyclops to the comic exploits of Mike Wazowski in Monsters, Inc. But life with only one peeper wouldn’t be nearly as fun or menacing as these tall tales make out. In fact, you could say living that way would be quite flat.

You see, Solomon had it right when he said, “Truly the light is sweet, and it is pleasant for the eyes [both of them] to behold the sun” (Ecclesiastes 11:7). God spaced two near-spheres “just so” on your face to do more than squinch up when you smile or refuse to stay closed the night before a big trip. Open them both wide, and you’ve got one ocular sensation in a stunning, stereoscopic 3D that puts Hollywood’s biggest efforts to shame.

Unlike most animals, we humans have our eyes placed up front and near the center of our flat faces. That’s not just so we can see our noses when we cross them up. Rather, each of your eyes captures a different image of the scene in front of you. The images then zap to the back of your brain at exactly the same time. Before you can blink, your brain processes the two images by lining up the similarities and taking into account what’s different. And what a difference those differences make.

Instead of mashing the information from our left eye and right eye into a flat panorama, our brains use the slightly differing views to give us depth perception. In other words, we know—in a general way—how close or far something is from us. To see this in action, put your hand way out in front of your face and then move it closer.

Your brain takes that two-eyed view and does some geometry for you in what’s known as triangulation (tryan-gyu-LAY-shun), or measuring distances by using angles. (Bet you didn’t know you do geometry every day.)

In addition to computing those angles, your brain measures shadows (what gets shaded by other objects), clarity (how clear the object is), and size differences (how big you know something is vs. how big it seems). It also relies on other visual cues to construct a view of the world that’s pretty eye popping.

Humans have an embarrassment of riches when it comes to this stereoscopic vision. (Stereo means that two things are working in tandem.) We can take in around 120º of 3D splendor, which is one-third of an entire circle. (Our field of view is actually about 190º total, but we see 3D only in the overlapping regions.). Such a broad swath of two-eyed vision is perfect for catching baseballs, threading needles, and dodging a low-lying tree limb. Some animals with eyes on the sides of their heads, such as buffaloes, have a wider field of vision, but you also wouldn’t want them driving a car. For that, you need a human point of view.

However, not every person has full stereoscopic vision, even if they have two otherwise healthy eyes. Some people (like the author) have a condition known as amblyopia (am-blee-OH-pee-uh) or “lazy eye.” In about 3% of children, the brain doesn’t process images properly for one eye, which keeps the person from developing their full visual ability. Over time, one eye becomes dominant, and the other gets blurry. If it’s not treated, this imbalance can hinder depth perception. (That’s one reason you should get your eyes checked regularly.)

For most of us, though, because our brains are so good at 3D, we can even trick ourselves. Visual illusions that use colorful dots can create the impression of depth when you gaze intently at them. Stare at them long enough, and your brain combines the dots from the left eye with the splotches from the right eye to form the illusion of depth.

Filmmakers take advantage of the eye-brain partnership when they produce 3D movies. First they film each scene from two different angles (or use a computer to generate another version in post-production). Then, special projectors show both versions of the scene at the same time. When we wear those special 3D glasses, our brains combine the two versions into a single image.

Any way you look at it, God’s gift of two eyes working in unison is truly an optic masterpiece. Sorry, Cyclops and Mike Wazowski, but we need stereoscopic vision if we’re to truly experience the world in all its depth. 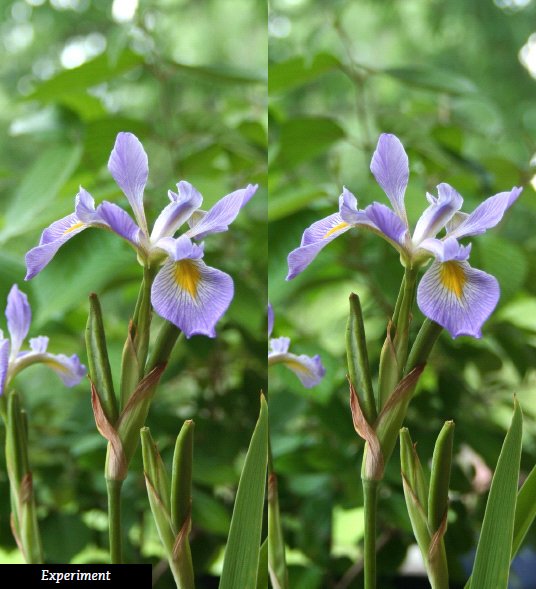 Other Activities at Home

Testing out your stereoscopic vision doesn’t require an elaborate setup. All you need are your peepers and a few things around the house. But you will need to make sure you and your parents see eye to eye before getting started.

An eye patch (if you have trouble keeping one eye closed—plus, it’s just fun)

A pitcher of water

A glass or cylinder that can hold water and stand up (the narrower, the better)

A towel (in case of spills)

First, take your thread and prepare it for pushing through the sewing needle (or needles).

Close one of your eyes and then try to thread the needle.

If you have a larger needle, repeat the process with that one.

Now, try threading the needle with both eyes open.

Did you notice any differences?

Take out your pitcher of water and place it by the sink.

Place your cup or cylinder in the kitchen sink.

Close one of your eyes.

Pick up your pitcher and try pouring the water into the glass.

Open both your eyes and try it again.

Take the key to the door where it fits the lock.

Open both eyes and try again.