Photo by Edgar Soto via Unsplash.

Diamonds—Time Capsules of Billions of Years? 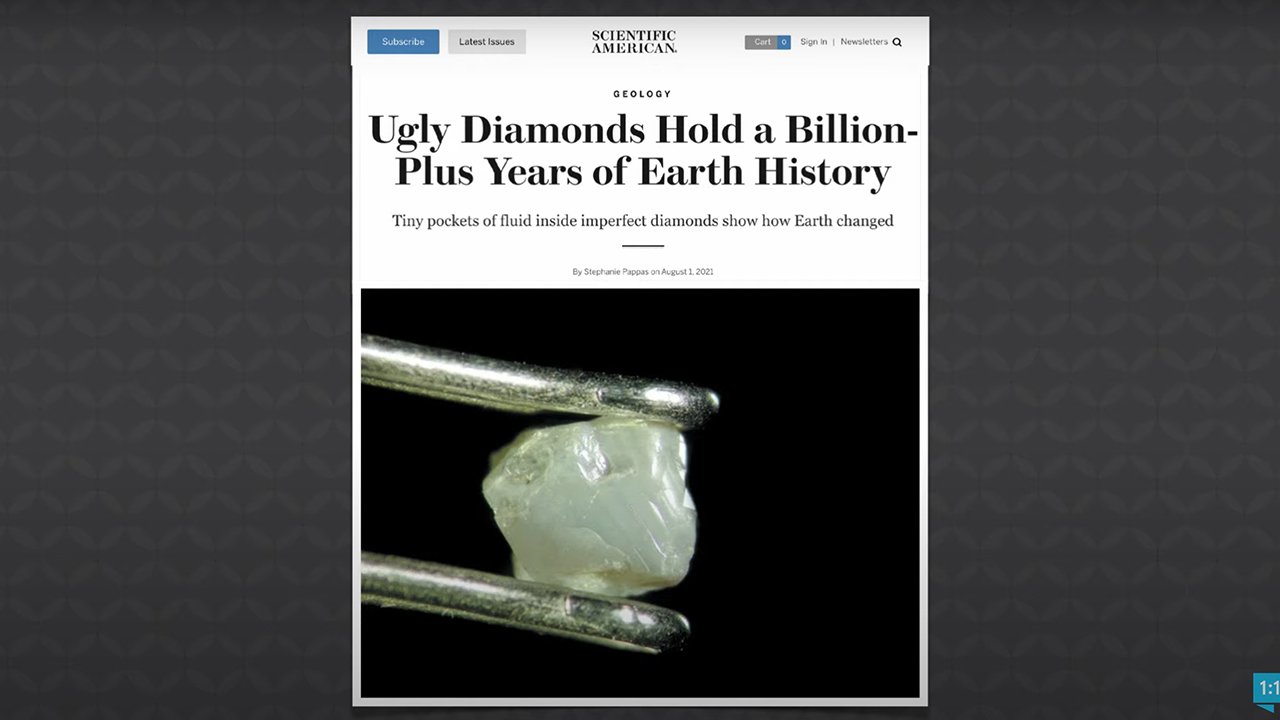 “Ugly diamonds”—or fibrous diamonds—aren’t the kind you’re likely to see on a lady’s finger, but you might find them in a scientific laboratory. Some of these cloudy diamonds contain small pockets of fluid, believed by many geologists to be billions of years old and therefore supposedly able to give us insight into early earth. But where do these dates come from?

Well, a popular summary of some new research on these fibrous diamonds states,

By modeling [the] decay [of uranium and thorium] and how much helium 4 leakage is possible over time, Weiss and his colleagues determined a broad age range for the stones. They then ruled out ages that would be impossible based on known tectonic and thermal conditions in Earth’s mantle and crust at the diamonds’ formation site. Combining these data yielded an upper limit on leakage, which the researchers could apply to all fibrous diamonds they studied.

The dates come from radiometric dating (which has a lot of problems!), and they throw out whichever dates don’t fit with their assumptions and preconceptions about the conditions on early earth—conditions they say they “know,” but they weren’t there!

So why might they get a “broad age range” for these diamonds? Well, as I mentioned above, radiometric dating has a lot of problems, including a chain of assumptions one must accept to believe radiometric dating gives reliable ages:

If even one of those assumptions is wrong, you can’t trust the dates! And we have no way of knowing if those assumptions are accurate because we weren’t there in the past. It’s very likely, because of supernatural creation and the global flood event, that those assumptions are totally wrong! That’s why radiometric dating of rocks of known age (i.e., scientists actually observed the rocks form) have yielded wildly different dates.

It’s also worth noting that some diamonds have been found to contain carbon-14. This radioactive form of carbon has a very short half-life (the time it takes half the atoms to decay), so in just a few hundred thousand years, there should be no detectable carbon-14 left. And yet we find carbon-14 in diamonds! Since diamonds can’t really be contaminated due to their hardness, we know that carbon isn’t there due to contamination. That means diamonds aren’t billions of years old, but just thousands!

There’s only one absolute dating method we can trust. And that is the Word of the One who has always been there, who has revealed to us the true history of the universe: the Bible.

This item was discussed yesterday on Answers News with cohosts Bodie Hodge, Dr. Jennifer Rivera, and Dr. Gabriela Haynes. Answers News is our twice-weekly news program filmed here at the Creation Museum and broadcast on my Facebook page and the Answers in Genesis Facebook page. We also covered the following intriguing topics:

Watch the entire episode of Answers News for August 23, 2021.