Sand Pillars—Breaking Through Millions of Years

Drive around the West, and you’ll see some strange sights: massive sand pillars rising up out of the ground. Even more intriguing, they had to destroy millions of years to get there. 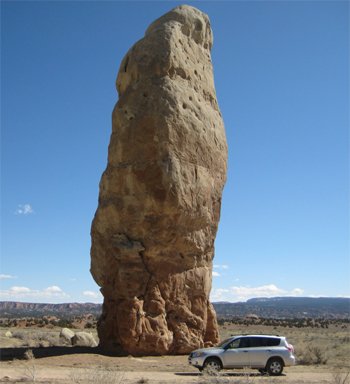 Secluded in the canyon country of southern Utah is a beautiful but often overlooked state park called Kodachrome Basin. It is often bypassed in favor of its more photogenic sister, Bryce Canyon. In a two-square-mile area is an astonishing collection of 67 sandstone pillars, ranging from a few feet in height to massive monoliths towering 172 feet (52 m) above the basin floor.1,2

Until recently, these structures were ignored as geologic oddities. But the discovery of oil associated with similar structures elsewhere in the world has sparked intense interest in how they formed. Somehow in the past, water-saturated sand layers were deposited deep in the earth, and then they suddenly became fluidized and broke through the layers above them. These “sand injectites” then hardened. Later, the sedimentary layers around them washed away, leaving behind the sand pillars.

This picture has some very interesting implications that challenge the conventional geologic timescale.

Geologists agree that water has deposited extensive layers of mud, sand, and silt across all of the earth’s continents. Grand Canyon, for example, has over 4,000 feet (1219 m) of such water-deposited layers exposed in its walls. But they don’t agree on how much time passed between these layers. Today they exist as mudstone, sandstone, and siltstone respectively. In most cases, they are as hard as brick. There are two basic models to explain this, each with very different views of geologic time.

If a single global flood laid down all the layers about the same time, then it follows that all the strata hardened at roughly the same time—probably within a few hundred years after this flood. If, on the other hand, the layers accumulated over a timescale of hundreds of millions of years, then one layer likely hardened before the next one came in on top of it.

Keep these two models in mind as we consider Kodachrome Basin.

Under close examination the pillars at Kodachrome Basin are composed of rounded pebbles, cobblestones, and carbonized wood, along with randomly arranged blocks of sedimentary rock up to a yard across. All of this jumbled concoction is “floating” in a matrix of well-cemented sandstone, like plums in a pudding.

The sandstone in the pillars matches closely in composition with only one layer, and it is found buried more than 1,000 feet (305 m) beneath the basin floor. What does all this mean?

Geologists are agreed on a story that would make sense of this evidence. Thousands of feet of strata were first deposited by water. While some of these sediments were yet soft and water-saturated, the earth shook. In one deeply buried layer, sand that had been resting one grain upon the other suddenly mobilized as an energetic sand-water slurry. In this excited state, the highly fluidized mixture was actually less dense than the layers above, enabling it to penetrate upward.

In its violent upward passage, the slurry picked up block-like fragments from the layers it penetrated. The whole mass probably reached its new position within minutes if not seconds. Once the water dissipated, the sand returned to its original grain-on-grain condition, and the whole mass ground to a halt. Chemical agents in the groundwater later hardened the rocks; but for reasons unknown, the injected sand bodies, or injectites, hardened to a greater degree than their surrounding host rock.

The hardened stony pillars of Kodachrome did not see the light of day until erosion swept away the softer sedimentary rock that had once entombed them. Today they stand as some of the world’s best exposed injectites. This is an amazing story and is widely accepted among geologists of all stripes.

However, here’s the remarkable thing: the injectites penetrated through 1,035 feet (315 m) of sedimentary rock layers. According to most geologists, those strata took about ten million years to accumulate. That is a rate of about one millimeter every three years. At such an infinitesimally slow rate, one would think each thin layer would lose its water and harden to stone before the next layer came on top.

Certainly after 10 million years and 1,035 feet of burial, we would expect the deeper layers of sand to have lost their excess water and hardened into sandstone. If that were the case, no injectites of the scale we see at Kodachrome could have formed! The fact that the injectites did form tells us that something is desperately wrong with this timescale.

This is no isolated occurrence. The same dilemma for the millions-of-years story is found in many different places around the world.

In Libya, for example, field research indicates that relatively deep layers of sand (Cambrian) intruded into higher layers (Devonian), which are supposedly some 70 to 100 million years younger.3 Beneath the North Sea are sands that were injected upward some “32 million years” after being deposited in the Paleocene. In central Utah are structures now being interpreted as injectites, which if true would mean “220 million years” separates the injection event from the time the layer was originally laid down.4 Can these numbers possibly be true?

In the Colorado Front Range outside of Colorado Springs, Cambrian sand supposedly 500 million years in age was apparently injected into structures not generated until the Cretaceous, supposedly 435 million years later.5 These are just a few examples.

The fact that sand was injected through so many layers indicates that the bulk of the sedimentary rock record was, in its entirety, in a soft and water-saturated state at the same time in the past. The only sufficient cause that can explain this is the Genesis Flood.

Pillars That Defy Millions of Years

At some time in the past a water-saturated sand layer got deeply buried beneath other sedimentary layers. For whatever reason, the sand retained much of its excess water and did not harden into sandstone. At some later time, perhaps due to an earthquake, the sand transformed itself into a fluidized sand-water slurry and penetrated or “injected” upward into the overlying deposits.

If the layers were laid down quickly in a single global flood, however, the problem goes away. The entire sedimentary section would have been soft following this flood, and water-rich sands would have been available to fluidize and then intrude or “inject” into the overlying layers.

Bill Hoesch earned a BA in geology from the University of Colorado-Boulder and an MS in geology from the Institute for Creation Research. He has served as exploration geologist and field engineer in the energy industry, and he currently teaches undergraduate science courses at Southern California Seminary.
Previous Article Truth Everyone Can See Next Article Hiding Their True Colors