Contrary to evolutionary claims, rock can form in a very short time, as shown by the example of the pliers.

This photo shows a rock-hard concretion of naturally accumulated sand and pebbles of varying sizes (plus a sea-shell fragment).

This has accumulated around what is obviously a modern pair of pliers, as can be seen by the exposed handles. The ‘rock’ around these lower parts has been broken off—the two fragments shown form part of a cast of the shape of the handles.

The pliers were found in July 1989 by Kevin Skemian. He picked them out of a shallow rock pool at the beach at Alexandra Headland on Queensland’s Sunshine Coast (Australia). They were lying in sandy grit on the bottom of the pool in about 15 centimetres (six inches) of water. 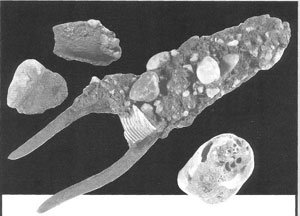 Kevin said that at the time he found the pliers, they were completely covered with ‘encrustation’, except for the end of one of the handles, where the coating had broken off. ‘I thought they had probably fallen out of someone’s fishing bag’, Kevin said. ‘They looked so old, but couldn’t be that old.’ He said he expected the rust to be soft and just fall away when he disturbed it. But it didn’t.

The coating has become more brittle with time, and some pieces have now broken off. This shows that rock need not take a long time to form, as most people wrongly believe.