An international team of scientists have recently rejected the idea that the Black Sea ever flooded suddenly in the past. The latest issue of TJ, the in-depth journal of Creation, examines their report and assesses its implications for the Bible.

In the late 1990s, two marine geologists, William Ryan and Walter Pitman, claimed to have found evidence for a catastrophic flooding of the Black Sea area about 7,600 years ago.1 Their “Black Sea flood” claim became famous when they alleged that it was actually the Flood of Noah as recorded in the Bible.2 In effect their claim alleges that the Biblical record of Noah’s Flood is grossly inaccurate and cannot be trusted.

Given the attitude of the media towards the Bible, it’s not surprising that their speculations have proved remarkably popular in television documentaries, books, journals and lectures.3 What is surprising though is how quickly their ideas have been embraced by Christians and even included into Bible handbooks.4

AiG examined the claims of Ryan and Pitman and showed that, even if there was a catastrophic flooding of the Black Sea, it was definitely not the Flood of Noah.5 If the Black Sea flood did occur, it would not have been 7,600 years ago but more likely around 1650 BC. From the limited geological evidence Ryan and Pitman presented, we felt that they had made a reasonable case for a sudden drowning of the Black Sea and we had no reason at the time to challenge that conclusion. However, it was not the Flood of Noah!

An international research team from Canada, USA, UK and Turkey is now disputing that there ever was a catastrophic flooding of the Black Sea.6,7 So, the whole idea of a Black Sea flood may evaporate completely.

The team used data from the “Marmara Sea Gateway”, which connects the Black Sea and the eastern Mediterranean (see figure). From seismic surveys, drill cores, radiocarbon dating and fossil studies they conclude that there is no support whatsoever for a catastrophic northward flow of saline Mediterranean water into the Black Sea. Rather, from the earliest times the connection was dominated by a southward flow of water, exactly the opposite direction required by Ryan and Pitman’s hypothesis. 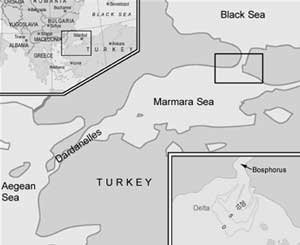 Ryan and Pitman proposed that a land bridge across the Bosporus isolated the Mediterranean from the Black Sea, which contained fresh water at a level at least 110 m lower. Catastrophic breaching of the hypothetical land bridge allowed salt water from the Mediterranean to pour into the Black Sea. However, new geological investigations in the Marmara Sea, especially the exit delta (C), show that water has always flowed south from the Black Sea and not north as required by Ryan and Pitman’s hypothesis.

This latest report, which illustrates how conclusions can change dramatically when new geological evidence comes to light is featured in issue 16(3) of TJ—the in-depth journal of Creation. The report illustrates the importance of putting our confidence, not in the speculations of fallible humans, but in the 100% reliable Word of God. Although the media were quick to speculate on the Black Sea/Noah’s Flood link, there has been no similar “media hype” about the Bible being true. In fact, one media headline suggested that the latest findings proved Noah’s Flood never happened. You can always be assured of the full story , however, in TJ.

TJ strengthens, challenges, and keeps up to date. Many testify they are helped by TJ:

TJ is an essential resource for teachers, professionals, academics, and students. Why not subscribe today? Don’t forget, now is a great time to give a gift subscription.