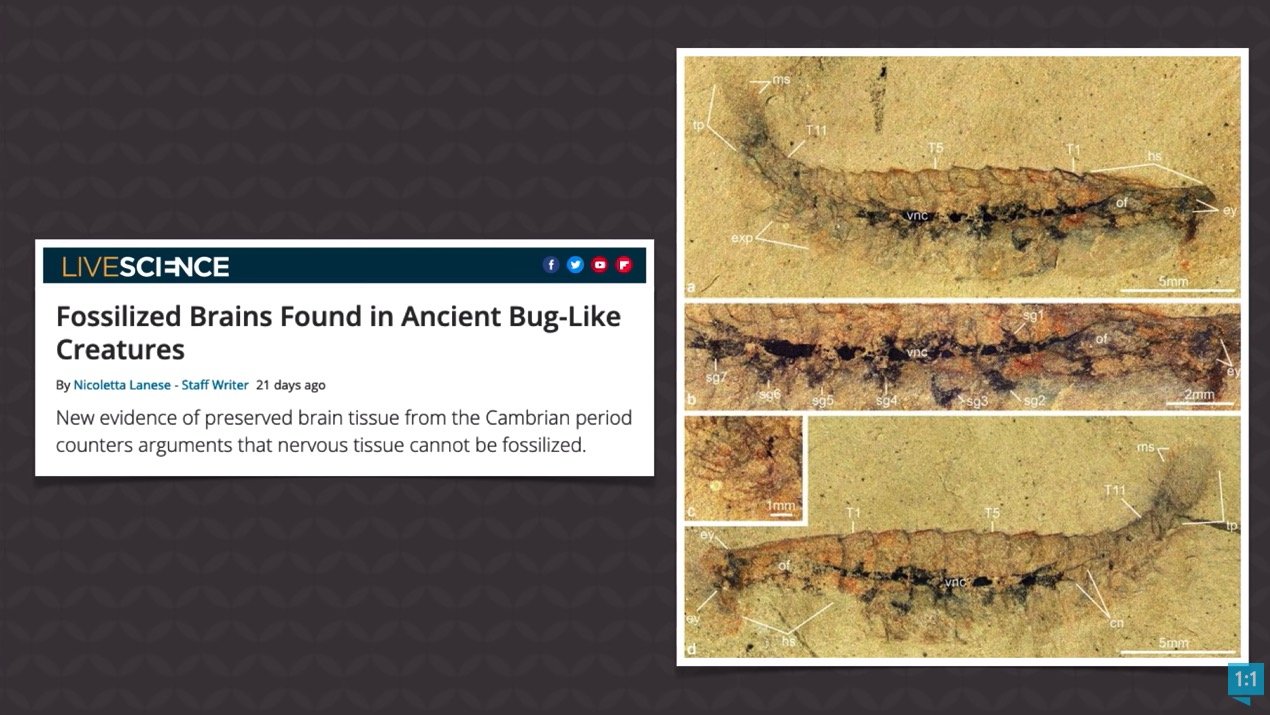 More and more scientists and researchers are shocked by the discovery of fossilized soft tissue (or, even more incredibly, unfossilized soft tissue!) in creatures thought to have died millions of years ago. These findings don’t fit the narrative most of us learned in school: a creature is slowly buried by sediments, gradually becoming fossilized. Instead, such fossils point to rapid, catastrophic burial. And a new find points, yet again, to catastrophic burial. Fossilization is a catastrophic process, as something has to be buried quickly.

Researchers uncovered the fossils of tiny bug-like creatures that are buried in so-called Cambrian rock layers (laid down near the beginning of Noah’s flood). This arthropod (it is in the same phylum as insects, spiders, and crustaceans) had an exoskeleton, which is often found fossilized because it’s a hard part. But researchers also discovered something surprising: what they think to be “beautifully preserved, symmetrical brain tissue.” Previous to this, researchers believed brain tissue couldn’t fossilize since it’s so soft and decays too quickly. But these two new specimens join a third specimen, discovered earlier, and seem to demonstrate this scientific assumption to be wrong.

Secular geologists start with another assumption that most of today’s rock layers and fossils are the results of slow and gradual processes over millions of years. Therefore, it’s very surprising for them to find soft tissue, fossilized or otherwise, in these creatures. But in a biblical worldview, this find is very exciting and not surprising at all. We know these creatures were buried during the global flood of Noah’s day just a few thousand years ago. It was a catastrophe that would have buried billions of creatures rather quickly. That explains why we find so many fossils all over the world. Many of them are beautifully preserved (even with soft parts intact).

When we start with the history in God’s Word, what we discover in the world makes sense!

This item was discussed on Monday on Answers News with cohosts Avery Foley, Roger Patterson, and Dr. Gabriela Haynes. Answers News is our weekly news program filmed live before a studio audience here at the Creation Museum and broadcast on my Facebook page and the Answers in Genesis Facebook page. We also covered the following topics:

Watch the entire episode of Answers News for January 6, 2019.