“If You Choose Monogamy, That’s Fantastic…[But] There are Other Choices.” 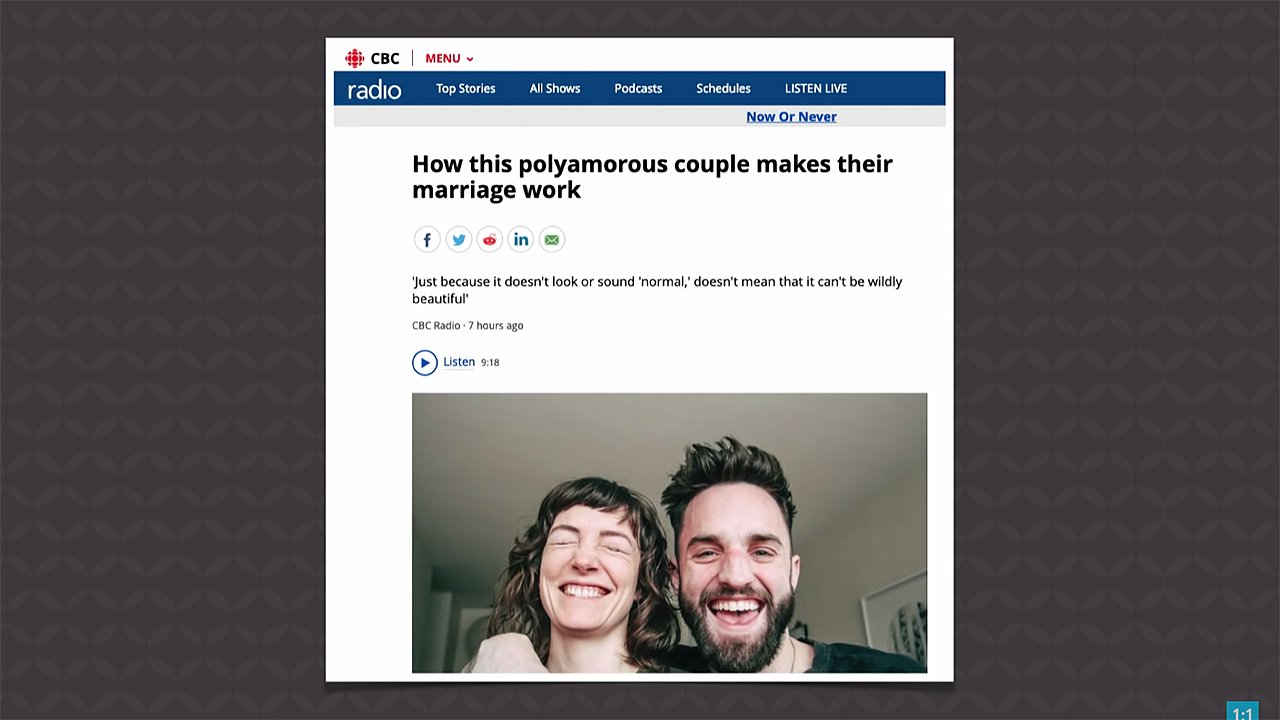 I’ve written over and over again that the attempt to redefine marriage to include homosexual couples is only the beginning. (I call it an “attempt” because no one can really redefine what God created and defined). God’s definition of marriage in Genesis 1:27 and 2:24 did not include homosexual couples! If you can redefine marriage to be between two men or two women, why stop at just two? And that’s exactly what we’re seeing. Increasingly, something called “polyamory” is growing and becoming more acceptable in the eyes of the culture.

If you can redefine marriage to be between two men or two women, why stop at just two?

A recent news article from Canada defined polyamory as “a form of non-monogamy in which individuals form intimate relationships with more than one partner, with the consent of all partners involved.” This article was summarizing a radio program featuring one polyamorous couple that hosts their own podcast on relationships and sexuality. If you read through the article, you’ll notice how “normal” the article attempts to make polyamory to be. It’s just “a form” of a regular relationship—move along, nothing to see here is the attitude. There’s this whole idea that’s now so prevalent in our secular culture that “love is love” and no one has any business judging anyone else’s sexual choices.

The husband in this relationship (who, in addition to his wife, has a long-term girlfriend and casually dates other people), says,

I also feel like it's important to remind people that just because it doesn't look or sound 'normal,' or doesn't fit inside a particular box that that you're used to, doesn't mean that it can't be wildly beautiful and work really well, and be super valuable to the people involved.

The secular community can’t really judge this marriage—you see, they have no foundation on which to do so. In that worldview, if that’s what these people want, then how can anyone say it’s wrong? But those of us who start with God’s Word can say that this is wrong—absolutely, unequivocally wrong no matter how “wildly beautiful” and “super valuable” it is to the people involved. And that’s because we have an absolute authority (God’s Word) by which we build our thinking and judge behavior. Regardless of “consent,” this husband and wife are committing adultery against one another, and those involved with them are likewise participating in this adultery. They may have each other’s consent, but they don’t have the consent of God, their Creator and Judge, to defile the marriage bed (Hebrews 13:4).

The article goes on to describe how they make their marriage “work” as an open relationship. The wife states,

It doesn't have to be ... one path fits all. And if you choose monogamy, that's fantastic. You've just got to choose it. If it's something that you just fall into, because that's all you've ever been taught, then you might feel like something's wrong with you if it's not working. It's just important to recognize that there are there are other choices and they don't have to threaten one another.

This statement encapsulates the secular mindset—it’s “about me” and “what works for me,” and there are no absolutes, no ultimate morality. Do whatever you want and whatever feels good. It’s what the Bible sums up as “everyone doing what’s right in their own eyes” (Judges 21:25)—people being their own God (which is what Satan tempted Adam and Eve with in Genesis chapter 3). This is the natural consequence of secular thinking: if there is no God, there are no moral absolutes. We decide right and wrong. Polyamory is perfectly consistent with this worldview.

We don’t define marriage and sexuality—God does.

But there are absolutes. We don’t define marriage and sexuality—God does. When we start with a biblical worldview, we view their relationship through an entirely different lens. God created marriage, he defines it, and any violation of his design is sin and we are accountable to our Creator for our choices. And his definition of marriage is clear—it is for one man and one woman for life (Genesis 1:27, 2:24) and adultery is sin (Exodus 20:14).

“Non-monogamy” isn’t an option for someone who loves the Lord and wants to obey his Word. And for those who have sinned sexually, including the sin of adultery, there is hope and forgiveness in the cross of Jesus Christ. He bore our sin and God’s just wrath against sin for us, so that we might receive grace and forgiveness if we will repent and put our faith and trust in him. I urge this couple, and everyone else, to repent and believe today. And just because we teach all this about this couple’s wrong view of “marriage” doesn’t mean we hate them. It means we love them enough to warn them of what God has stated clearly about such behavior.

This was discussed on Answers News with co-hosts Dr. Georgia Purdom, Bodie Hodge, and Dr. Gabriela Haynes. Answers News is our twice-weekly news program filmed live before a studio audience here at the Creation Museum and broadcast on my Facebook page and the Answers in Genesis Facebook page. We also discussed the following topics:

Watch the entire episode of Answers News for February 14, 2019.