Biblical Blueprints for the Marriage Covenant

Dr. Rainey is known for teaching biblical principles that lead to a godly marriage and to raising godly offspring.

As a brand-new ministry twelve years ago, Answers in Genesis-USA was grateful for any opportunity to let the fledgling apologetics ministry be known in broader circles, including through like-minded organizations firmly rooted in the Bible. In 1994, for example, the popular radio program Family Life Today broadcast excerpts from one of Ken Ham’s seminar talks, and this was heard on hundreds of radio stations in America. AiG was extremely grateful for that opportunity. 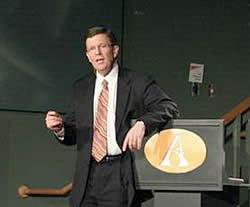 Twelve years ago, Dr. Dennis Rainey was (and still is) the host of that program-and the president of this large ministry based in Arkansas. He visited AiG recently to speak to the staff and special invited guests. While here, he also took a construction tour of AiG's future Creation Museum and was thrilled to see the potential of this walk-through-history project.

AiG-USA president Ken Ham interviewed Dr. Rainey during his visit. In this interview, Ken also shares some of his personal insights about his relationship with his father, and then reveals how he and his wife Mally have raised their children. Some of what Ken shared is contained in his new book The Genesis of a Legacy.

Some of the other intriguing topics covered in this interview are:

Dr. Rainey is known for teaching biblical principles that lead to a godly marriage and to raising godly offspring. Starting with the book of Genesis (where the institution of marriage is first announced), Dr. Rainey is known for offering practical insights not only through his radio program but in his many books. In an age when many “Christian” counselors just refer to the Bible on occasion, but more often rely on secular psychology for dispensing advice, Dr. Rainey-as you will discover when you listen to the interview-is a family life counselor who is committed to biblical teachings.