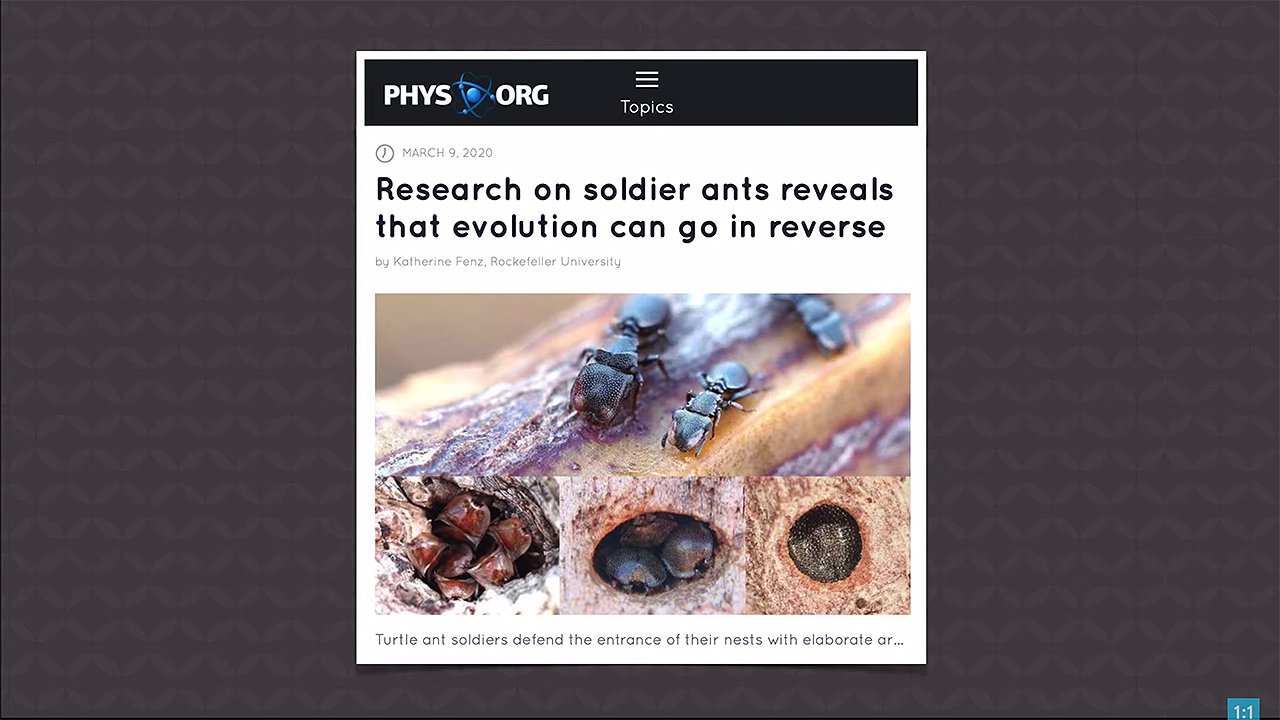 A recent news item caught my eye. It stated that the soldiers of Turtle ants show that evolution can go in reverse. This might seem like a startling announcement until you look closely at what they observed and reported.

The researchers were somewhat surprised to learn that this size variation almost perfectly correlates to the width of the tunnels these ants live in.

There are over 100 species of Turtle ants of the genus Cephalotes. They mostly live in the trees of tropical areas all over the world. Ten of these species have no soldier ants (basically the defenders of the queen and colony), just workers, drones, and the queen. But of the species which do have soldiers, there is a wide variety of body and especially head size. Some soldier ants have heads four times larger than others, and their shape varies drastically as well.

A recent journal paper looked at this variation and how it occurs. And the researchers were somewhat surprised to learn that this size variation almost perfectly correlates to the width of the tunnels these ants live in. What makes this even more remarkable is that the ants don’t burrow their own tunnels but occupy vacant wood-boring beetle tunnels. The Turtle ant soldiers either are a perfect one-to-one match for the tunnel width in which case they have “dish” or “disc” shaped heads (which effectively seal off the tunnel from predators), or not. In the latter case, they have dome- or square-shaped heads which mandate that several soldier ants block the tunnel with their heads, like overlapping shields.

So, Turtle ant soldiers are uniquely adapted to their environment, and when conditions (like tunnel size) change (presumably due to different wood-boring beetles making the tunnels), these ants can rapidly adapt.

So how do evolutionists explain such variety in a single genus? And why do several of the species share similar head sizes when living in separate locations?

Well, the researchers decided to look at the genetics of these ants. Based on (arbitrary) evolutionary assumptions, they determined that square-headed ants were the original “head shape”—but that these ants’ head shape varied over time to the other shapes and then could revert back to square-shaped. Basically, they found that the shape of Turtle ant heads adapted to the context of the environment they occupy.

So, Turtle ant soldiers are uniquely adapted to their environment, and when conditions (like tunnel size) change (presumably due to different wood-boring beetles making the tunnels), these ants can rapidly adapt. This means even going from “dish” or “disc” heads, back to “square” heads, and then to “dome” heads as the situation demands. Rather than showcasing evolution (whether forward or reverse), these ants show the handiwork of Divine design. God created each biblical kind with a vast amount of genetic diversity so that organisms could adapt in a rapidly changing world. While some species have lost much of their original genetic diversity through speciation, it appears that these Turtle ants haven’t lost as much (at least gene variants for head size and shape) and can adapt rapidly back and forth as needed. For a creature whose very life depends upon the burrowing size of another insect, waiting around for “evolution” would be a death sentence. But God cares for all his creatures and even points us to his created ants to study his ways (Proverbs 6:6-8, Proverbs 30:24-25).

So, what these scientists have ultimately observed is that Turtle ants remain turtle ants and have a lot of built-in genetic diversity! This has nothing to do with molecules-to-man evolution ideas!

This item was discussed on Monday on Answers News with Ken Ham, and guest hosts Roger Patterson and Tim Chaffey. Answers News is our weekly news program held here at the Creation Museum and broadcast on my Facebook page and the Answers in Genesis Facebook page. We also covered the following topics:

Watch the entire episode of Answers News for March 16, 2020.