T. rex Even Bigger Than Once Thought 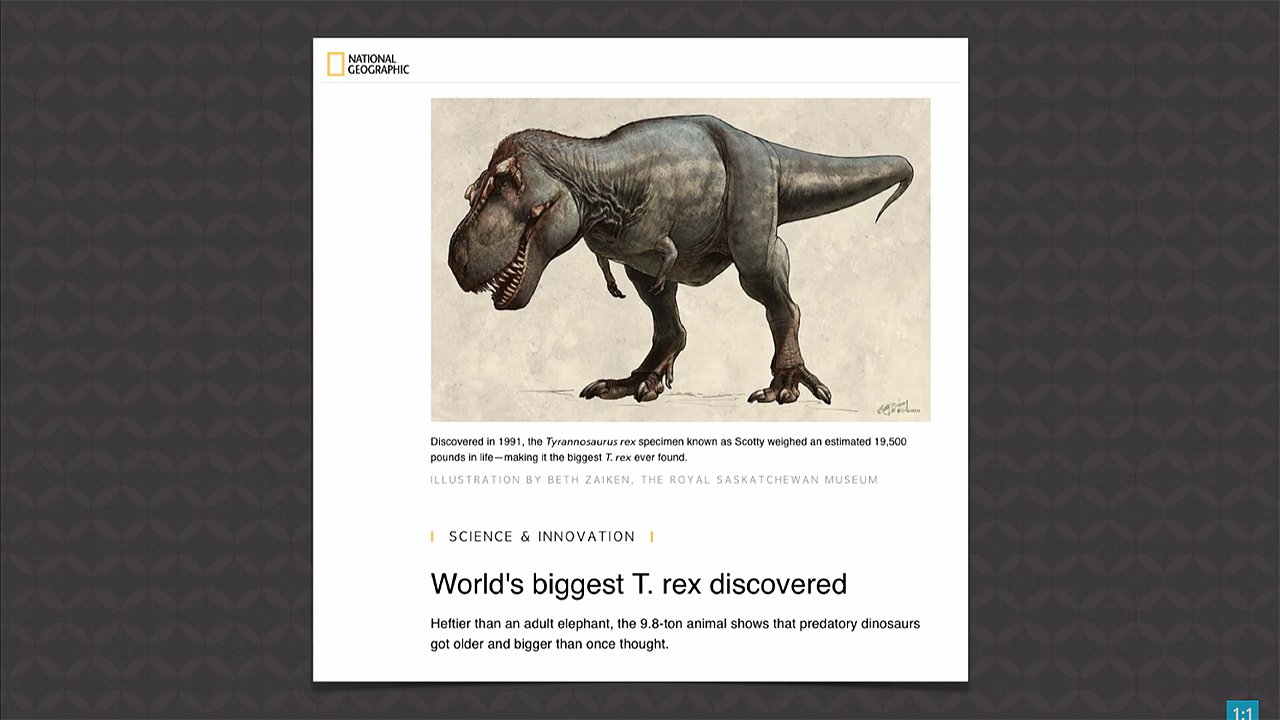 Scientists in Canada have announced their analysis of a 65% complete T. rex skeleton, painstakingly dug out of rock and analyzed over the past 29 years. Their estimates put this dinosaur at 28 years old at death and a whopping 19,500 pounds. Now that’s a big dinosaur!

One of the lines in the National Geographic article on the announcement reminded me of a common question we are asked here at AiG. The article stated (emphasis added):

The find suggests that large predatory dinosaurs probably got older and bigger than paleontologists would have surmised based on currently available fossils. Among the known species, T. rex is one of the best represented extinct dinosaurs, with more than 20 fossil individuals identified.

Many people have the impression we have many fossil representatives of each, or at least most, dinosaur species. But often that’s not the case.

Now, many people have the impression we have many fossil representatives of each, or at least most, dinosaur species. But often that’s not the case. The clear majority of the fossil record is made up of sea creatures (understandably since the flood of Noah was a marine catastrophe), particularly corals and shellfish, and only a tiny fraction is vertebrates, of which an even tinier fraction is dinosaurs.

And that brings me to the question we’re frequently asked, “Why don’t we find dinosaurs and humans buried together?” Well, the first thing to recognize is how scanty the fossil record is when it comes to land creatures—there are only 20 incomplete fossil individuals of T. rex! Since marine creatures are more numerous than land-dwelling vertebrates and since the flood was a marine catastrophe, it makes sense that most of our fossils are of marine creatures, not dinosaurs or people.

Also, just because something wasn’t buried together doesn’t mean they didn’t live together. There are many creatures in the wild today that humans rarely cross paths with, such as snow leopards or giant pandas. And, honestly, in a sin-cursed and broken world, who’s going to want to live near T. rex anyway? Just because humans and dinosaurs aren’t found buried in the same layers doesn’t mean humans didn’t once live at the same time. And there are many creatures alive that live alongside man today, that are also found as fossils in the same layers as dinosaurs yet they’re not found with human fossils!

Bodie Hodge has written an excellent and more thorough response to this question in our New Answers Book 1 and you can read that chapter here.

I discussed this item today on Answers News with cohosts Dr. Georgia Purdom and Bodie Hodge. Answers News is our twice-weekly news program filmed live before a studio audience here at the Creation Museum and broadcast on my Facebook page and the Answers in Genesis Facebook page. We also covered the following topics:

Watch the entire episode of Answers News for April 4, 2019.