Did Mammals Live Alongside the “Earliest” Dinosaurs? 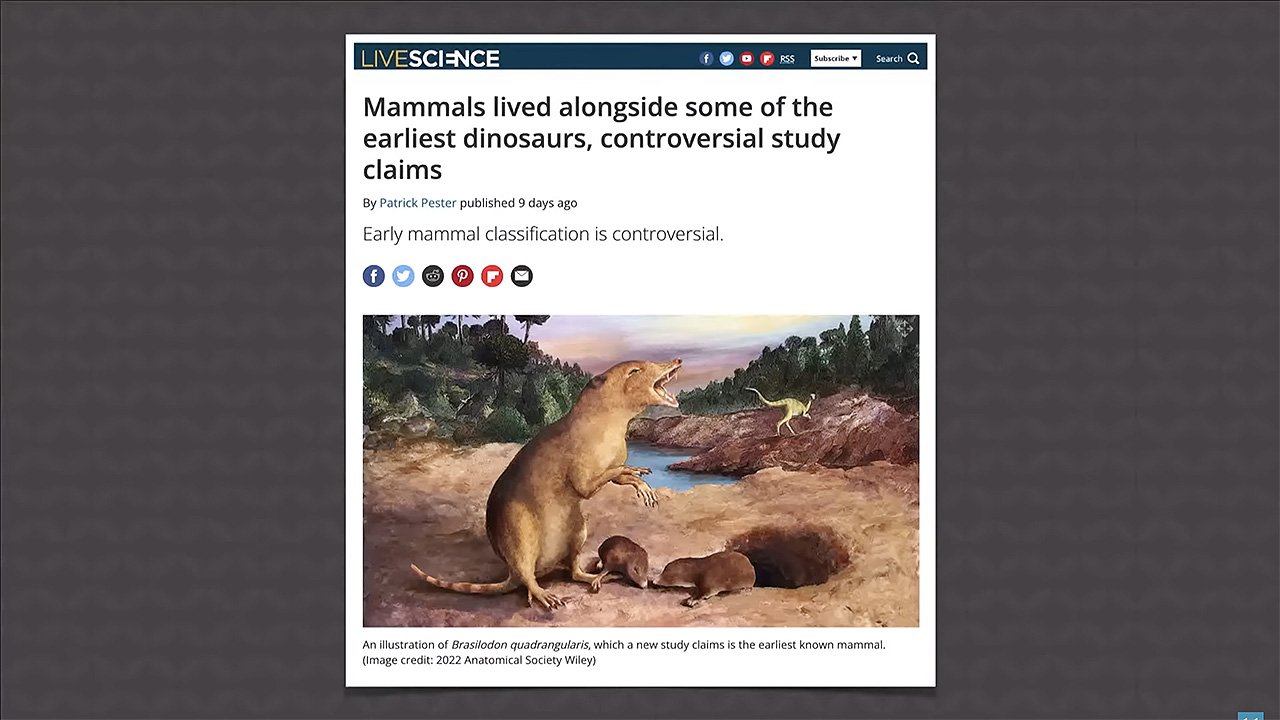 According to the evolutionary worldview, dinosaurs first appear in the Triassic period (with the most well-known dinosaurs not emerging until the Jurassic and Cretaceous), when mammals were few and very small. Now a new study claims they’ve identified the “earliest known mammal,” moving back the “appearance of mammals by about 20 million years.” This study is quite controversial, with many scientists arguing that this tiny, 8-inch creature wasn’t a mammal at all. What do both sides of the Brasilodon quadrangularis debate have wrong?

The new study, which looked at cross-sections of the creature’s jaws, discovered that B. quadrangularis grew two sets of teeth (i.e., “baby” and “adult” teeth) over its lifetime, like the majority of mammals do today. According to the study authors, this makes it a mammal. But other evolutionists have disputed the claim, with one saying:

Diphyodont [two sets of teeth] teeth are a known feature of mammaliaforms [mammals and their supposed ancestors], but while finding this feature on B. quadrangularis is exciting, it doesn't necessarily mean that B. quadrangularis belongs with other mammaliaforms … Animals inherit features from their ancestors, but life is constantly evolving and changing to form new branches on the evolutionary tree.

Feathers were once thought to be a defining feature of birds … Now we know that feathers arose much earlier and are common in many dinosaurs. But just because T. rex is now reconstructed to have feathers does not make it a bird.

Both the study authors and the detractors have the wrong starting point and therefore the wrong worldview.

Brasilodon quadrangularis was not the earliest mammal (though it may have been a mammal). Aquatic mammals were created on day 5 of creation week, with the bulk of mammals being created the following day, on day 6, the same day as all the dinosaurs (and other land animals)—as well as mankind. Mammals didn’t slowly evolve onto the scene in a world dominated by dinosaurs and other reptiles. They were created, according to their kinds, fully formed and functioning.

So why don’t we find mammal fossils before the Triassic layers? Well, here’s a few things to keep in mind as we think about this question:

Now the detractors of the study claim that just because a mammalian feature is found in a creature doesn’t necessarily make them a mammal. After all, traits disappear and reappear (supposedly) all throughout evolutionary history. Of course, this is just story telling. No one was there to observe such a thing. This is an interpretation of the evidence through the lens of evolutionary ideas. The observable evidence in the present is that mammals have mammal features and other creatures don’t share those same traits.

The observable evidence in the present is that mammals have mammal features and other creatures don’t share those same traits.

The example this person gives to back up their point is feathers on dinosaurs. And there, once again, you really see the evolutionary underpinnings of this idea: feathers were “once thought to be a defining feature of birds” but they aren’t anymore according to evolutionists because feathers have been tacked onto many different dinosaurs. And it’s not because of overwhelming evidence (the evidence is shaky, at best). It’s because of the presupposition that dinosaurs evolved into birds (with many today saying that birds are dinosaurs). Sadly, even some creation scientists are now being sucked into this false idea (even though birds were created on day 5 and dinosaurs on day 6) because they don’t recognize the evolution-based, worldview-driven interpretation of so many fossil finds.

Was Brasilodon quadrangularis the earliest mammal, roaming with herds of dinosaurs? No, it was not the earliest mammal—it was part of a kind created by God along with the rest of the land creatures (on day six of the creation week) and is therefore the same age as all mammals, terrestrial reptiles, and everything else God created on that day. But, yes, the kind this small creature belonged to roamed with the dinosaurs because it was created on the very same day as them. Eventually, sometime after the flood, B. quadrangularis and the dinosaurs died out.

Fossils are fascinating and we will learn a lot by studying them. But they aren’t a gigantic mystery with a gnarly, interconnected family tree when we start with the history in God’s Word!

This item was discussed today on Answers News with cohosts Dr. Georgia Purdom, Patricia Engler, and Rob Webb. Answers News is our weekly news program filmed live before a studio audience here at the Creation Museum and broadcast on my Facebook page and the Answers in Genesis Facebook page. We also covered the following topics:

Watch the entire episode of Answers News for September 26, 2022.