If we are to keep from falling for false teachings, we must know what God’s Word says.

Thank you for contacting Answers in Genesis. I will be replying on behalf of Ken. I am inserting some comments below and they are said with kindness and I hope they encourage you to be more biblical and search the Scriptures to verify such claims.

ken,God warns about false teachers in these end times.

But false prophets also arose among the people, just as there will also be false teachers among you, who will secretly introduce destructive heresies, even denying the Master who bought them, bringing swift destruction upon themselves. Many will follow their sensuality, and because of them the way of the truth will be maligned; and in their greed they will exploit you with false words; their judgment from long ago is not idle, and their destruction is not asleep. (2 Peter 2:1-3).

The Bible needs to be used as the final check for any belief. Recall that

All Scripture is God-breathed and is useful for teaching, rebuking, correcting and training in righteousness, so that the man of God may be thoroughly equipped for every good work. (2 Timothy 3:16-17).

Now that we have established that, let’s look at some of these claims that were sent in.

cain was an 8th day creation,

Cain was not created in the unique way Adam and Eve were. Cain was conceived (Genesis 4:1). To believe that Cain was conceived (perhaps what you meant by “creation”) on the 8th day would require knowing when Adam sinned, since Cain’s conception happened after Adam sinned. We know it wasn’t on Day 6 since God declared that everything was “very good”-otherwise sin would be very good. It was not on Day 7, since God sanctified that day and made it holy. Therefore, it had to be after this.

I just wanted to say thanks to Ken Ham and the folks from AIG for coming to Cary, NC on July 9th. Thinking the service would be starting at 6pm, we arrived at the parking lot at 20 minutes ’til 6. I was very disappointed that there were very few cars there, and was concerned there was no interest in the Triangle area (a bastion of evolutionist researchers at universities such as UNC, Duke, NCSU) about the importance of Ken Ham’s message. When we came into the lobby, Ken Ham was sitting on a bench talking with folks and shaking hands. (a very humble impression for one of the most sought-after speakers of the day.) We soon realized that we were very early. I was very pleased at 6:30 to see the overflow crowd. People were standing against the walls and overflowing into the lobby. The pastor of the church asked everyone to sit closer. As a result, rows with 12 or so chairs were actually seating 14 or more. I turned to my friend and asked him what kind of impact the church would have on the world for Christ if churches were that full of people every Sunday hearing the Word of God. Since asking that question, I wondered why that isn’t so. After about 20 seconds of thought it dawned on me. Ken Ham preaches from the Bible, he believes every word of It without making apologies, and God honors it by drawing people to the Truth. I pray that one day soon preachers around the world will start believing what the Bible says and preach it without compromise. Praise God for AIG!

Although we can’t be certain of this exact date as the Bible gives no clear indication of when they sinned (though, considering Genesis 1:28, it had to be relatively soon), presuming that Cain was conceived on Day 8 may be a stretch.

who went to Nod to marry a 6th day creation.

Where does the Bible say or infer this? This is impossible biblically (Genesis 3:20). Cain’s wife must be a descendant of Eve as was Cain, so the logical extension is that Cain’s wife was his close kin: probably his sister (see Cain’s Wife—Who Was She? and Does the Word of God need defending?).

all the races were created on the 6th day,

Acts 17:26 makes it clear that we are all one race. From the perspective that the one race of humans was created on Day 6, I would agree. “Races” (plural-what we prefer to call “people groups” or cultures) then, obviously, weren’t created independently of this. Features attributed to races are merely the result of natural processes of migration, adaptation and inheritance following the relatively short period of time since the Tower of Babel.

Besides, this 6th-day-races theology runs into a problem regarding the Flood. Do you honestly think each people group or alleged “race” was wiped out and then suddenly reappeared magically without mention again? Please see Are There Really Different Races?

adam was created on the 8th day Gen 2 read carefully .

Then God said, “Let Us make man (0120 אדם 'adam) in Our image, according to Our likeness; and let them rule over the fish of the sea and over the birds of the sky and over the cattle and over all the earth, and over every creeping thing that creeps on the earth.” (Genesis 1:26).

You mention getting a Strong’s Concordance (below), Strong’s should have made this clear. Besides, the bulk of Genesis 2 is a more detailed, complementary account of the events of Day 6, giving more detail of the creation of man and woman.

also there were 3 earth ages we are now in the second age, dinosaurs were in the 1st age, not walking with noah.

This idea doesn’t come from the Bible but from secular philosophies. However, there is nothing wrong with taking the history of the world and breaking it into three different ages. But use the Bible as a basis for it, not the world’s philosophies.

Since you are referring to the earth as well as the future, and want to do three ages, then I suggest Pre-Cursed, Cursed and Restored. The earth prior to sin entering the world, would be the first age (Genesis 1:1 - Genesis 3:14), the second would incur the Curse (Genesis 3:14 - Revelation 22:3) and the last would be the earth without a curse again (Revelation 22:3 - forever). 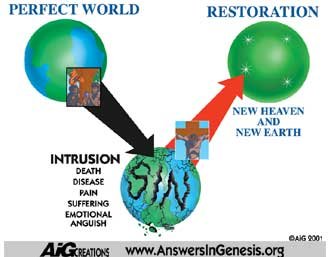 However, the age system you indicate is not one of them. Dinosaurs were made on Day 6, since all the land animals were made on this day (Genesis 1:25). God strictly told Noah to take two of each kind of unclean, land-dwelling, air-breathing animals (which included dinosaurs) on the Ark.

And of every living thing of all flesh, you shall bring two of every kind into the ark, to keep them alive with you; they shall be male and female. (Genesis 6:19).

If you try to separate Noah from an age that included dinosaurs, logic shows this impossible. We find dinosaur fossils that were formed during the Flood, so we know they had to be around. So Noah had dinosaurs on the Ark. So either this view is wrong or the Bible is. We believe the Bible.

for the sake of those who listen to you,don’t deceive with fairy tails.

We don’t believe fairy tales such as the belief in millions of years, goo-to-you evolution or the Easter Bunny. The theology you’ve presented to me is not biblical, and is no different from fairy tales. Why do you believe them?

Should I trust a perfect God and His Word or the fairy tale just presented to me? I will stick with God’s Word over fallible man’s opinions.

Joe, I will reiterate what Paul wrote to Timothy, and I want it to challenge you:

Timothy, guard what has been entrusted to your care. Turn away from godless chatter and the opposing ideas of what is falsely called knowledge, which some have professed and in so doing have wandered from the faith. Grace be with you. (1 Timothy 6:20-21).

There is no reason to abandon what the Bible plainly teaches for philosophies that come from man.

God is watching us all and we will be held accountable.

Agreed. Let this be a reminder to us both to be biblical in all areas.

I am not judgeing,

I am letting the Bible judge the false theology presented to me. God commands us to have righteous judgment based on God’s Word, not the ideas of man-which is where judgments can be fallible. Christ said:

But if I do judge, my decisions are right, because I am not alone. I stand with the Father, who sent me. (John 8:16)

The Bible is God’s Word and Christ is God so the Bible is Christ’s Word. When Christ says something, then it will be right and the Bible can, logically, make right judgments. So we too should make righteous judgments as Christ is our perfect example.

In the way that we judge, we will be judged (Matthew 7:2)! I want to be judged by God’s Word, and so I will also use God’s Word to demolish arguments (2 Corinthians 10:5). As Christians, we should let Christ, who has the power to judge, judge our theology.

I love you as ny brother in christ

And we also love you as our brother and want to encourage you to stand firm on what was written by God.

and fear those you misslead in your teachings.

knowing greek and hebrew will help you in your study, purchase a strongs concordance.

May God bless you as well and may these challenges spur you to stand on the authority of God’s Word, not man’s fallible ideas.

P.S. I like Matthew 13:11-17. Christ answers the disciples who were asking why He spoke in parables when speaking publicly. Jesus made it clear that they [the disciples] understood the gospel but the other Jews didn’t. Even seeing and hearing, many at that time rejected the gospel. Later, when the Jews refused to listen to Paul and Barnabas, the message of the gospel and salvation was taken to the gentiles (Acts 13:46). Many of the Jewish leaders of that day failed to understand what the prophets and righteous men of the Old Testament longed to hear but didn’t get to; the Jews of that day had the opportunity and rejected it.

This should be a lesson to the Church today. The Jews of that time had Christ in their midst and didn’t listen to Him. We, as a Church, have the Bible in our midst (more easily accessible than ever!); yet how often do we really listen to it? It’s time to return to God’s Word.

Previous Article Cartoons in Ministry? Next Article What Message Should be Passed on to Our Children?