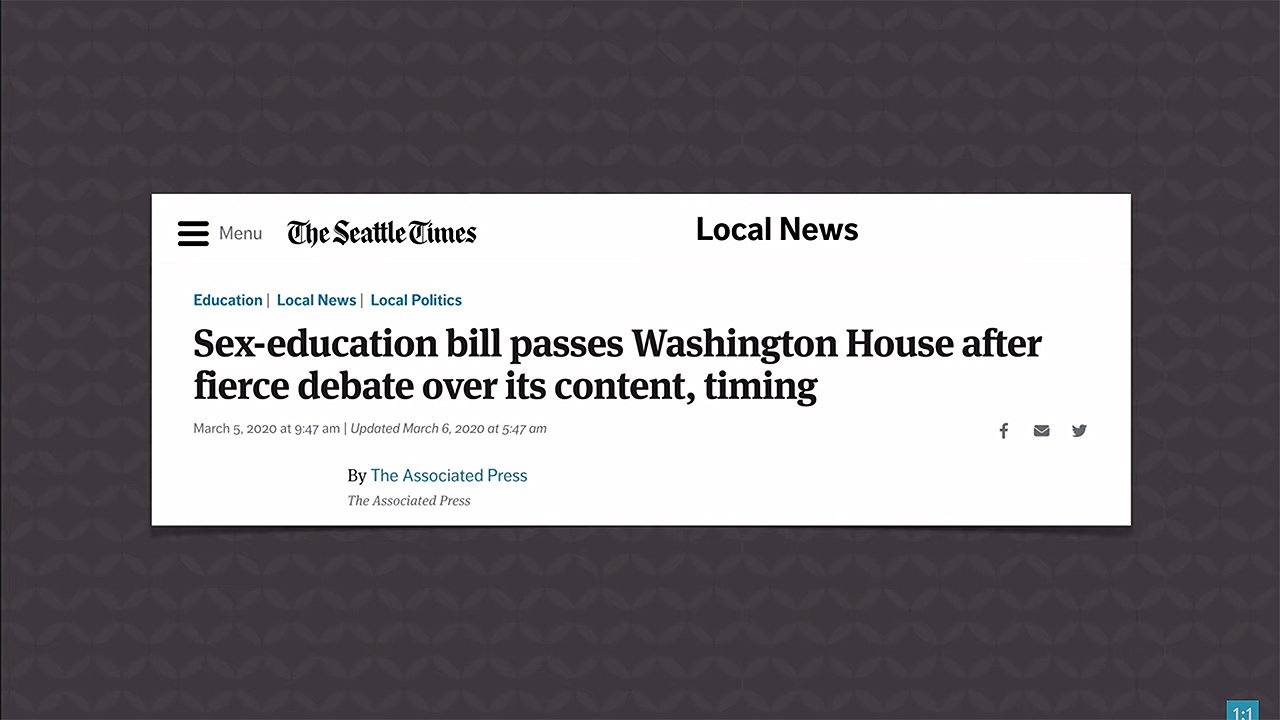 A recent news item from the Seattle Times mentioned the passing of a comprehensive new sex-education bill which would enact a new K-12 curriculum beginning in the 2022–2023 school year. The bill, which had already passed the Washington State Senate, also passed by a vote of 56–40 in the State house, but with the House’s modifications that will need to go back to the Senate. It is expected that Governor Jay Inslee will sign the bill into law when it reaches his desk. This new curriculum will actually be phased in a year earlier in the 2021–2022 school year for grades 6–12, and then be mandatory for K–12 the following year.

According to a copy of the bill passed by the House, once fully implemented, this sex-ed curriculum (more like humanist sexual dogma) would be taught a total of six times between kindergarten to 12th grade.

The bill faced a lot of debate regarding its content and the children’s ages to which it will be implemented. Although there is no single mandated curriculum, there are several suggested resources to use. One such potential curriculum is from the abortion giant Planned Parenthood (PP), and the organization is also mentioned as a resource. So, you can immediately begin to guess the worldview of at least some of these curricula. According to a copy of the bill passed by the House, once fully implemented, this sex-ed curriculum (more like humanist sexual dogma) would be taught a total of six times between kindergarten to 12th grade.

Neither the House or Senate bill list much detail on the content of the “comprehensive sexual health education” curriculum, but rather they refer to the curriculum guide. According to a report on that Senate bill,

Students will be taught that homosexual sex is just as normal and good as heterosexual sex. They will be taught that sometimes people are born into the wrong bodies and should try to change their appearance/bodies to match their feelings about their gender—a belief that implies God sometimes makes mistakes and gets gender and sex wrong. And they will not be taught that there are various beliefs on sex and gender, they will only hear the information from one side—that of the LGBTQ advocates.

Really, it should be called “The Child Abuse Curriculum.”

The only positive notes are that the bill gives a provision for parents to opt their children out of the instruction, and that the local school must grant the written request to have the student excused from this instruction. In addition, any parent or legal guardian may review the sexual health education curriculum by filing a written request with the school district’s board of directors, the principal of the school his or her child attends, or the principal's designee.

Now what we’re really seeing here is a deliberate attempt at indoctrinating children as young as kindergartners in the sexual dogma of humanism, including transgenderism and LGBTQ acceptance. And this agenda is being pushed by Planned Parenthood. So, I’m sure this “comprehensive” sex-ed curriculum won’t include the biblical definitions of gender, marriage as between one man and one woman, and sexual purity before marriage. In fact, the House bill states that the course, besides abstinence, must teach “other methods of preventing unintended pregnancy and sexually transmitted diseases. Abstinence may not be taught to the exclusion of other materials and instruction on contraceptives and disease prevention.” In other words, anything goes!

With Planned Parenthood and other sexually liberal organizations driving this agenda, you can guess where the emphasis will be.

With Planned Parenthood and other sexually liberal organizations driving this agenda, you can guess where the emphasis will be. As a former Republican candidate for state senator told the Christian Post in an email interview, “Planned Parenthood benefits when teens and young adults get contraceptives, sexually transmitted infections (STI) testing, and abortions from them. A new program of PP provides hormone therapy for transgender patients. Those hormones are expensive and life-long, which is a huge benefit to Planned Parenthood's business model.”

As Christians and citizens, we need to stand against this sexualization of our children. And as parents, we need to instruct our children with the truth of God’s Word and what he says about marriage, gender, and sexuality (with age-appropriate counsel). We also need to keep these issues in prayer before our Lord daily.

As I’ve said many times before, much of public education has become—or is quickly becoming—the church of secular humanism (atheism).

I discussed this item on Monday's Answers News with guest hosts Roger Patterson and Tim Chaffey. Answers News is our weekly news program conducted here at the Creation Museum and broadcast on my Facebook page and the Answers in Genesis Facebook page. We also covered the following topics:

Watch the entire episode of Answers News for March 16, 2020.