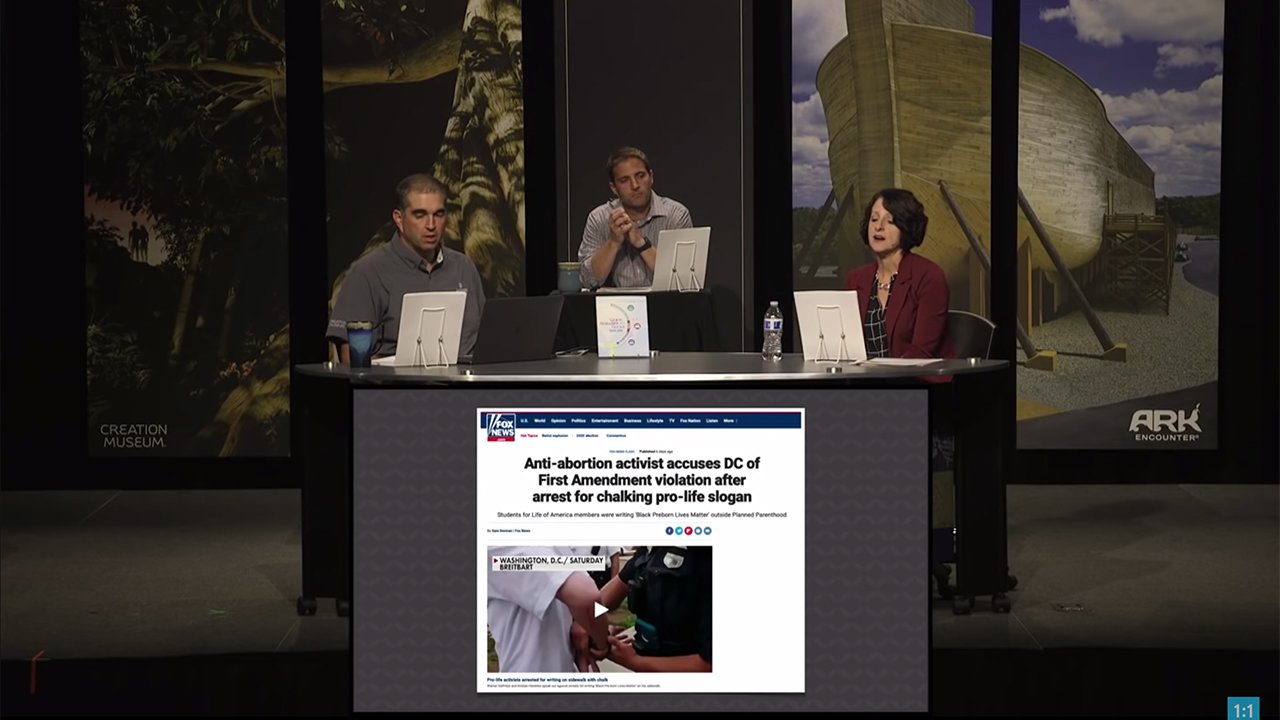 In the minds of many people today, the phrase “Black Lives Matter” is supposed to affirm that racism is wrong (which it is) and that we need to work to end lingering prejudices and discrimination. Of course, the phrase means much more than that—the Black Lives Matter organization behind the popular hashtag stands for Marxist values, transgender ideology, and a disruption of the family unit. Just a quick glance of the BLM website reveals that. But do many of those who say the phrase “Black Lives Matter” really believe all so-called “black” (really, we’re all just shades of brown) lives matter? No. Apparently there are two different sets of rules.

But while they were chalking the sidewalk, they were approached by police authorities, and both pro-life activists were arrested.

A pro-life group, Students for Life of America, recently used sidewalk chalk to spell out the phrase “Black Pre-born Lives Matter” on the sidewalk outside of a Planned Parenthood clinic in Washington, DC. They did this in protest of the abortions—presumably the disproportionate number of abortions committed on unborn babies with a darker shade of skin there in DC—that take place in such facilities. But while they were chalking the sidewalk, they were approached by police, and both pro-life activists were arrested. Reportedly, the group had obtained a permit to assemble and a verbal affirmation that their chalk artwork was permitted. They were, however, arrested.

The Students for Life of America president stated in an interview,

. . . What was happening was viewpoint discrimination . . . We have a mayor here in Washington, D.C., that painted the streets ‘Black Lives Matter,’ that allowed activists associated with the Black Lives Matter organization to then go without the permit and [in] permanent paint, paint ‘Defund the Police’ . . .

It would appear that in our culture today that there are two sets of rules: one set for people with conservative and/or Christian worldviews and another set for those who hold to a secular worldview. And the chasm between the two is growing wider and deeper.

Or will we start with man’s ideas, which lead to moral relativism and, in our culture today, the belief that unborn lives (among others) do not matter?

In our culture today we’re seeing a spiritual battle raging—a battle over foundations. Will we start with God’s Word, which teaches that all humans beings—born or unborn, dark brown, light brown, or in-between, all levels of ability, male or female—are made in the image of God and have equal value and dignity? Or will we start with man’s ideas, which lead to moral relativism and, in our culture today, the belief that unborn lives (among others) do not matter? There is no neutrality (Matthew 12:30). There are only two options—man’s word or God’s Word.

The worldview that comes from the starting point of man’s word is inconsistent and constantly changing. But God’s Word is an unchanging, utterly consistent starting point for our thinking in every area.

To learn the truth about the origin of the human race, the formation of different people groups, and how to deal with racism and prejudice, visit the Creation Museum and the Ark Encounter in N. Kentucky and see our spectacular exhibits dealing with this timely topic.

This item was discussed yesterday on Answers News with cohosts Dr. Jennifer Rivera, Roger Patterson, and Bryan Osborne. Answers News is our weekly news program filmed live before a studio audience here at the Creation Museum and broadcast on my Facebook page and the Answers in Genesis Facebook page. We also covered the following topics:

Watch the entire episode of Answers News for August 12, 2020.