“Polyamorous Parenting”: Who Defines the Family? 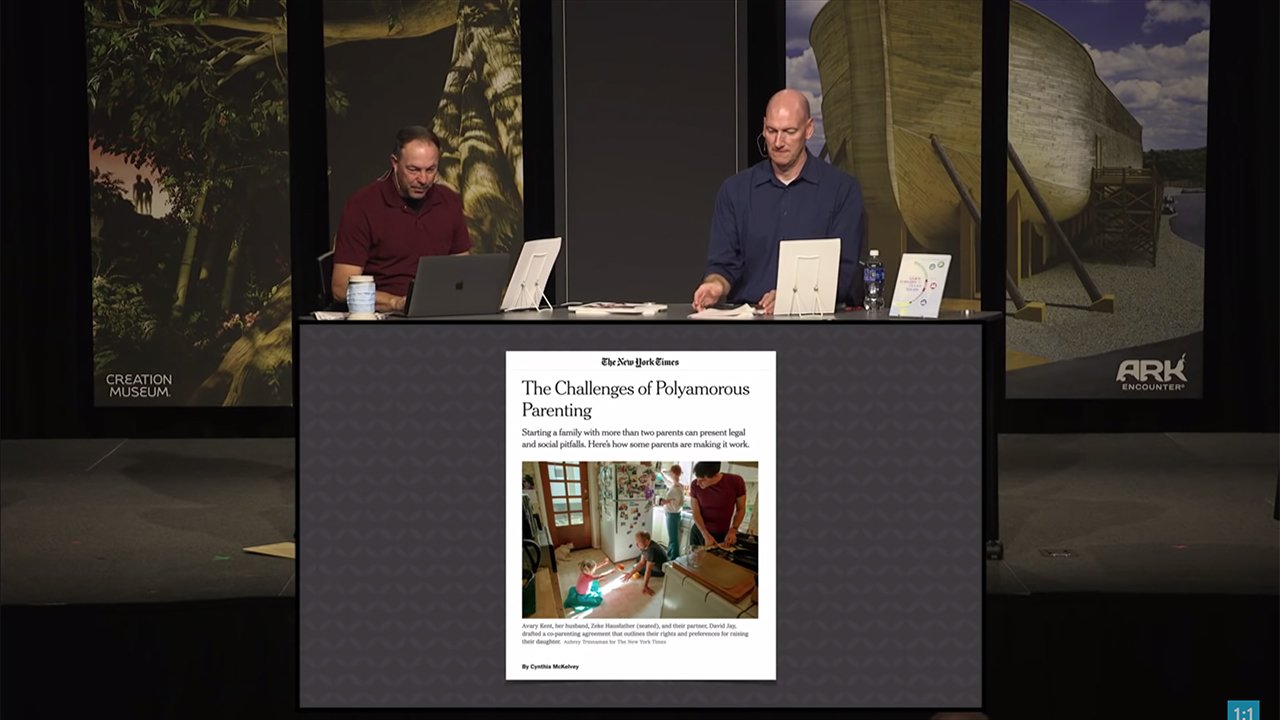 “What’s your authority?” For decades now I’ve been passionately talking about the absolute authority of the Word of God. While Answers in Genesis is known for its stance on the age of the earth and rejecting molecules-to-man evolution, we are not primarily a young-earth or creation ministry—those positions and emphases are a result of our stance on God’s Word as the ultimate authority in all areas, beginning in Genesis 1:1. We are a biblical authority ministry. And as our culture continues to drift further into secularism, moral relativism, and the chaos of the sexual and gender revolutions, it is vital the church boldly stands on the authority of God’s Word—our very survival depends on it.

It is vital the church boldly stands on the authority of God’s Word—our very survival depends on it.

What do I mean by this? (And what does it have to do with the title of this blog?) Well, before I get to that, I want you to watch a clip of two very different men—Pastor John MacArthur of Grace Community Church and California Governor Gavin Newsom.

This clip dates back to 2004, long before the 2015 legalization of same-sex “marriage” across the United States. In this clip, Newsom (then the mayor of San Francisco) defends same-sex “marriage” by saying that, back in the middle of the twentieth century, people used a theological argument to argue against the legalization of so-called interracial marriage. (Really, there’s no such thing as “interracial” since we’re all one race, the human race, and the church should have been proclaiming this biblical truth all along; sadly, much of the church ignored God’s Word and went along with the culture at the time.) Newsom, a Roman Catholic, then goes on to say, “I don’t see what we’re doing in terms of advancing the bond of love and monogamy and extending that to families, families of same sex, in any way, shape, or form takes away from the church or the sanctity of the union that my wife and I have.”

Our culture has, by and large, abandoned God’s Word as the authority. Instead, man determines truth—man determines right from wrong.

That is exactly what’s going on in the culture now. Our culture has, by and large, abandoned God’s Word as the authority. Instead, man determines truth—man determines right from wrong. Man has set himself up as the authority and said we get to define marriage and the family. And without an absolute authority, anything goes.

And that brings me to the title of today’s blog—“‘Polyamorous Parenting’: Who Defines the Family?” A recent article in the parenting section of The New York Times carried the headline, “The Challenges of Polyamorous Parenting.” The article opens with, “Policymakers in the United States are just beginning to expand their definitions of what makes a family.” Read that again . . . US policymakers are “expand[ing] their definitions of what makes a family.”

I would ask them, “What’s your authority?” You see, policymakers don’t have authority to redefine the family. The family is God’s institution. He invented and defined it in Genesis 1:27 and Genesis 2:24, when he created marriage, therefore, creating the family.

So God created man in his own image, in the image of God he created him; male and female he created them.

Therefore a man shall leave his father and his mother and hold fast to his wife, and they shall become one flesh.

The family is not a social institution that policymakers can dismantle and rebuild, based on their own opinions or the lust and desires of a culture in rebellion against God-ordained boundaries on their behavior.

The family is not a social institution that policymakers can dismantle and rebuild based on their own opinions or the lust and desires of a culture in rebellion against God-ordained boundaries on their behavior. The family is God’s institution. And he designed it to be one man (a male) who is the husband and father, and one woman (a female!), who is the wife and mother. That is God’s “very good” design for the family.

Now, we live in a sin-cursed and broken world and, for tragic reasons, including divorce, death, abuse, neglect, or abandonment, families don’t or can’t always model this design—but those are tragic exceptions and do not negate how God designed the family to be. Polyamorous “families,” as described in The New York Times article, are not families—they are assemblages of adults (with children caught in the crosshairs) usurping God’s design with their own sinful ideas.

Parents and churches, you need to be speaking up against this. This article from The New York Times uses the same arguments the LGBT movement has used for years (sadly, with great success—even among many professing Christians!). They appeal to emotions, “research” that suggests children fare just as well (or are maybe better off) in a polyamorous family, and the negative impact of “stigma” to sway the reader to accept this radical redefinition of God’s primary institution. We need a generation of believers who can see through these arguments and understand what they actually are—faulty appeals to an authority other than God and his Word. Our emotions are not the authority. “Research” is not the authority. Others’ feelings are not the authority. God and his Word are the authority in all areas.

So why am I so passionate about biblical authority? Why does the church desperately need to get back to the authority of the Word of God in all areas? Because the future of the church and the future of our families depend on it. We need a generation who knows God’s Word, believes God’s Word, and humbly submits themselves to the Word of God in all areas no matter what the world around us is saying.

So Christian, I’ll ask you the same question Pastor MacArthur asked Newsom, “Do you believe the Bible is the Word of God?” And if you do, are you allowing it to be your ultimate authority in all areas, and are you teaching your children to do the same? If not, start today—there’s nothing more important.

This item was discussed yesterday on Answers News with cohosts Tim Chaffey and Bodie Hodge. Answers News is our weekly news program filmed live before a studio audience here at the Creation Museum and broadcast on my Facebook page and the Answers in Genesis Facebook page. We also covered the following topics:

Watch the entire episode of Answers News for September 2, 2020.