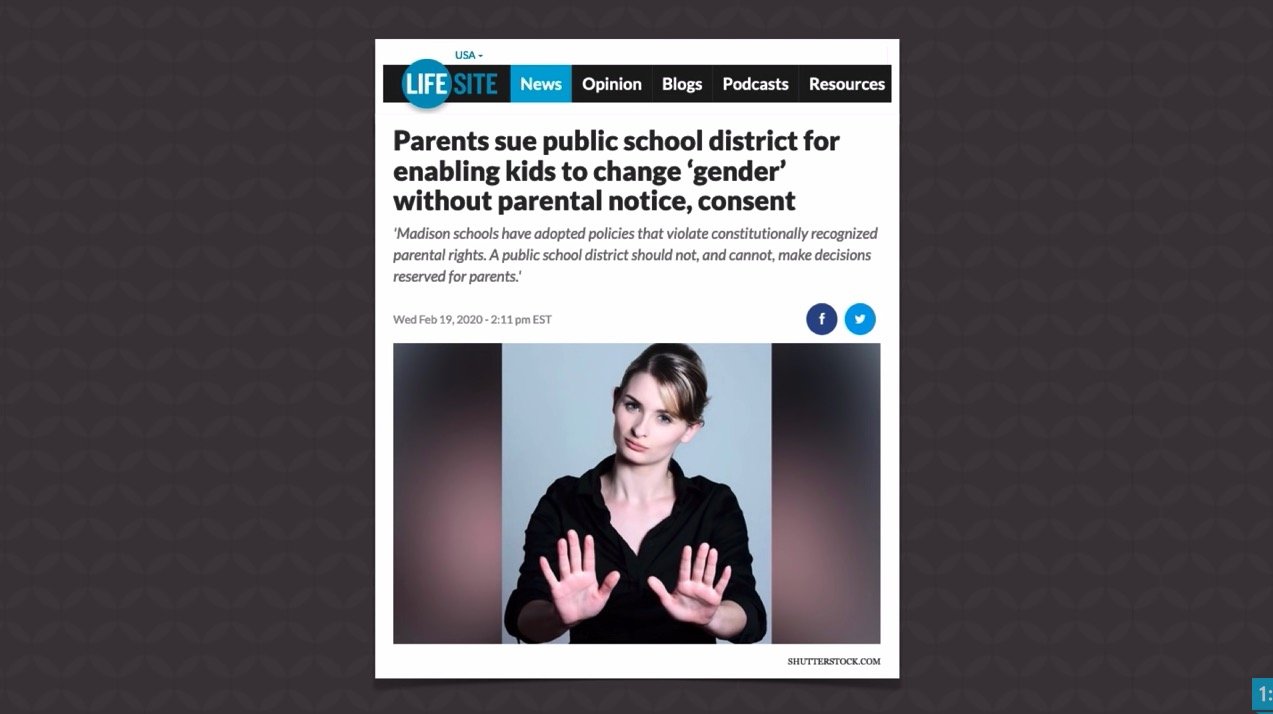 Tired of being badgered by unconstitutional policies, parents are suing the Madison (Wisconsin) Metropolitan School District for enabling (and even encouraging) children to socially transition to a member of the opposite sex at school without parental notice or consent.

The lawsuit, filed on February 18, claims that the school district is in violation of parents’ fundamental and constitutional right to direct the upbringing of their children. The lawsuit specifically mentions that the school district’s adoption of its “Guidance and Policies to Support Transgender, Non-Binary, and Gender-Expansive Students” in 2018 and subsequent “transition” training programs violate two sections of the Wisconsin Constitution as well as numerous Wisconsin supreme court cases which uphold the rights of parents in the upbringing of their children.

The “guidance and policies” mentioned above require teachers to refer to students by their affirmed names and pronouns, and says that “School staff shall not disclose any information that may reveal a student’s gender identity to others, including parents or guardians and other school staff, unless legally required to do so or unless the student has authorized such disclosure.”

The filed lawsuit even includes examples of the school district encouraging children to question their gender. One such example includes a video in which the teacher reads a book to the children that contains statements like: “Are you a boy or a girl? How can you be both? Some days I am both. Some days I am neither. Most days, I am everything in between.” And: “Many people understand that my gender is something for only me to decide.” The lawsuit also shows how the school district intends to “disrupt” any binary gender discussion through books and lessons “limit[ing] gendered and binary language,” and interrupting and correcting “misconceptions about gender or language that reinforce the gender binary.”

In other words, the school district is deliberately attempting to oppose Christian beliefs and specifically target Christian children with indoctrination in sexual humanism.

In other words, the school district is deliberately attempting to oppose Christian beliefs and specifically target Christian children with indoctrination in sexual humanism. And all of this is being done without any parental notification or consent. It’s paid for by taxpayers—and yet, those who send their children to Christian schools or homeschool in many states in the US can’t get the taxes they pay to be applied to the education they want. Christians who opt out of the increasingly pagan public schools still have to pay their taxes to fund this system!

Now Scripture is clear on this subject of gender (and biology is as well): God created mankind male and female (Genesis 1:27). Coercing children to believe that there are several genders, that you can change your gender based on your feelings, that you can hide this from your parents and even have your teachers lie to them about it is extremely disturbing and wrong. It is also anti-science. Even worse is that if a child believes in the biblical definition of gender, that child could be “interrupted” and “corrected” (which is also a violation of the US and Wisconsin constitutions on freedom of religion according to the dictates of conscience). This is a blatant and unconscionable anti-Christian indoctrination.

This item was discussed on Monday on Answers News with cohosts Drs. Georgia Purdom and Gabriela Haynes. Answers News is our weekly news program filmed live before a studio audience here at the Creation Museum and broadcast on my Facebook page and the Answers in Genesis Facebook page. We also covered the following topics:

Watch the entire episode of Answers News for March 2, 2020.