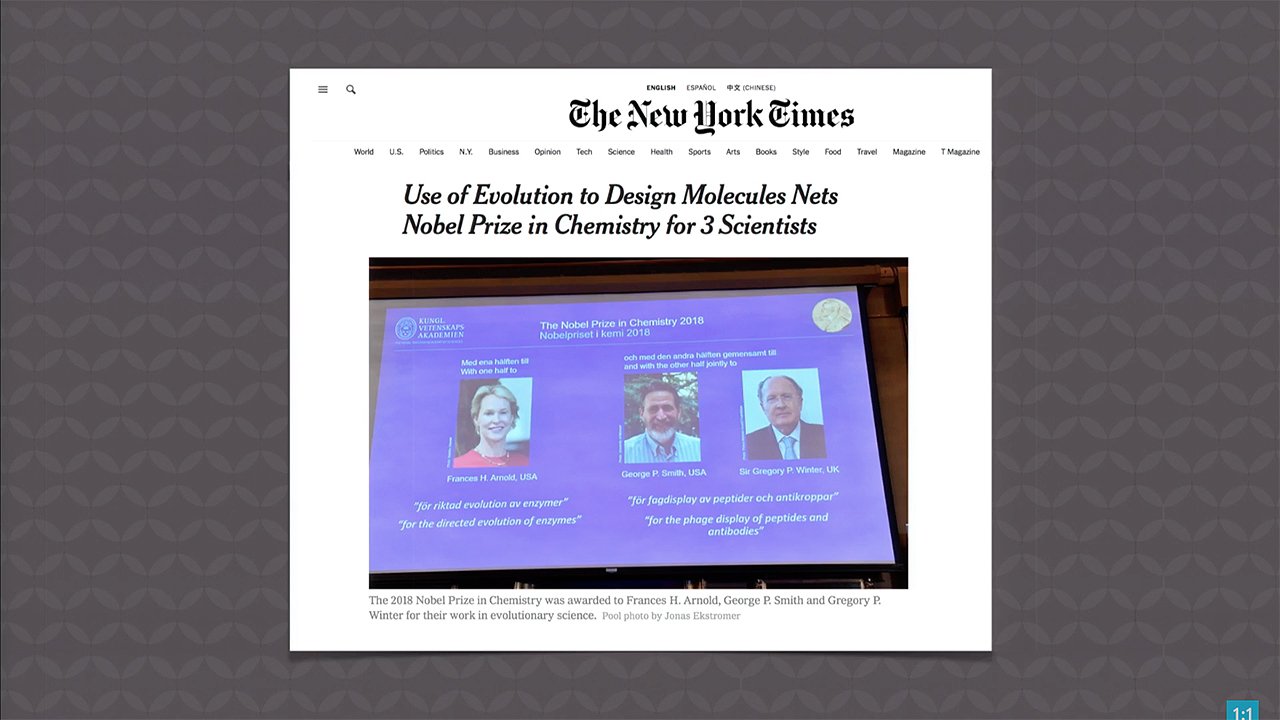 The New York Times ran an article about the three winners of this year’s Nobel Prize in chemistry, which were announced on October 3, 2018. All three winners, Frances H. Arnold, George P. Smith, and Gregory P. Winter, were awarded “for their work in evolutionary science”.

Half of the prize and the accompanying $1 million prize money went to Frances H. Arnold, a professor of chemical engineering at the California Institute of Technology, for her work on developing new enzymes through induced mutations. The other half of the prize was shared by George P. Smith, an emeritus professor of biological sciences at the University of Missouri, and Gregory P. Winter, a biochemist at the M.R.C. Laboratory of Molecular Biology in England. Both worked with bacteriophages (viruses that infect bacteria) to identify unknown genes (Smith) and to develop antibodies (Winter).

Now what I find fascinating is the Royal Swedish Academy of Sciences’ Nobel Prize’s press release announcing the winners of the shared prize in chemistry. Look at how often intelligent human design and input is equated with “randomness” in an attempt to emphasize molecules-to-man evolutionary processes. Let me list a few quotes used throughout the press release to describe two of the winner’s research.

“Frances Arnold utilised the fact that subtilisin breaks down milk protein, casein. She then selected the variant of subtilisin that was most effective in breaking down casein in a solution with 35 per cent DMF. She subsequently introduced a new round of random mutations in this subtilisin, which yielded a variant that worked even better in DMF.

“In the third generation of subtilisin she found a variant that worked 256 times better in DMF than the original enzyme. This variant of the enzyme had a combination of ten different mutations, the benefits of which no one could have worked out in advance. With this, Frances Arnold demonstrated the power of allowing chance and directed selection, instead of solely human rationality, to govern the development of new enzymes.”

“Smith introduced a gene into the gene for a protein in the phage’s capsule. The phage DNA was then inserted into bacteria that produced phages. The peptide produced from the introduced gene ended up as part of the capsule protein on the surface of the phage. Smith was able to fish out the phage using an antibody designed to attach to the peptide. As a bonus, he got the gene for the peptide.”

Regarding Dr. Winter’s research, he followed up on George Smith’s work and inserted the gene for producing an antibody into the phages and then examined variants of the antibodies, selecting the ones that bound most effectively to the target protein. Dr. Winters then continued to mutate the gene, and discarded ones that did not have strong attachments which led to more effective antibodies.

Now all of these scientists were described as having “taken control of evolution and used it for the greatest benefit to humankind” and “they have revolutionised both chemistry and the development of new pharmaceuticals through directed evolution.” But is there really any evolution (in the Darwinian sense) at work here? Frankly if I were given an award for some great scientific achievement and then told that it would be equated to chance random processes which were unguided by intelligence, I’d be a little offended. All of these scientists used their brilliant God-given intellect to theorize, problem-solve, and to design experiments, replicate, and catalog their research, which is being used for the development of new technologies to produce biofuels and drugs to help cure disease.

There is no power of naturalistic evolution to create anything demonstrated here.

As our own geneticist, Dr. Georgia Purdom, stated in a recent interview regarding Dr. Arnold's Nobel-winning research: “For evolution—if you're going to go from one kind of organism to another, you have to not just make a protein work a little bit better or a little bit differently. You've got to make entirely new proteins. Her work doesn't show that at all. [This] has nothing to do with random chance. She's the one shifting around the parts of the DNA and making these proteins better.” Rather than showing the “power of evolution,” these Nobel winners show that intelligent design and directed effort was needed to accomplish anything beneficial to humanity. There is no power of naturalistic evolution to create anything demonstrated here.

This item was discussed today on Answers News with regular cohosts Dr. Georgia Purdom and Bodie Hodge and guest Bryan Osborne, AiG’s curriculum specialist. Answers News is our twice-weekly news program filmed live before a studio audience here at the Creation Museum and broadcast on my my Facebook page and the Answers in Genesis Facebook page. They also discussed the following topics:

Watch the entire episode of Answers News for October 8, 2018.