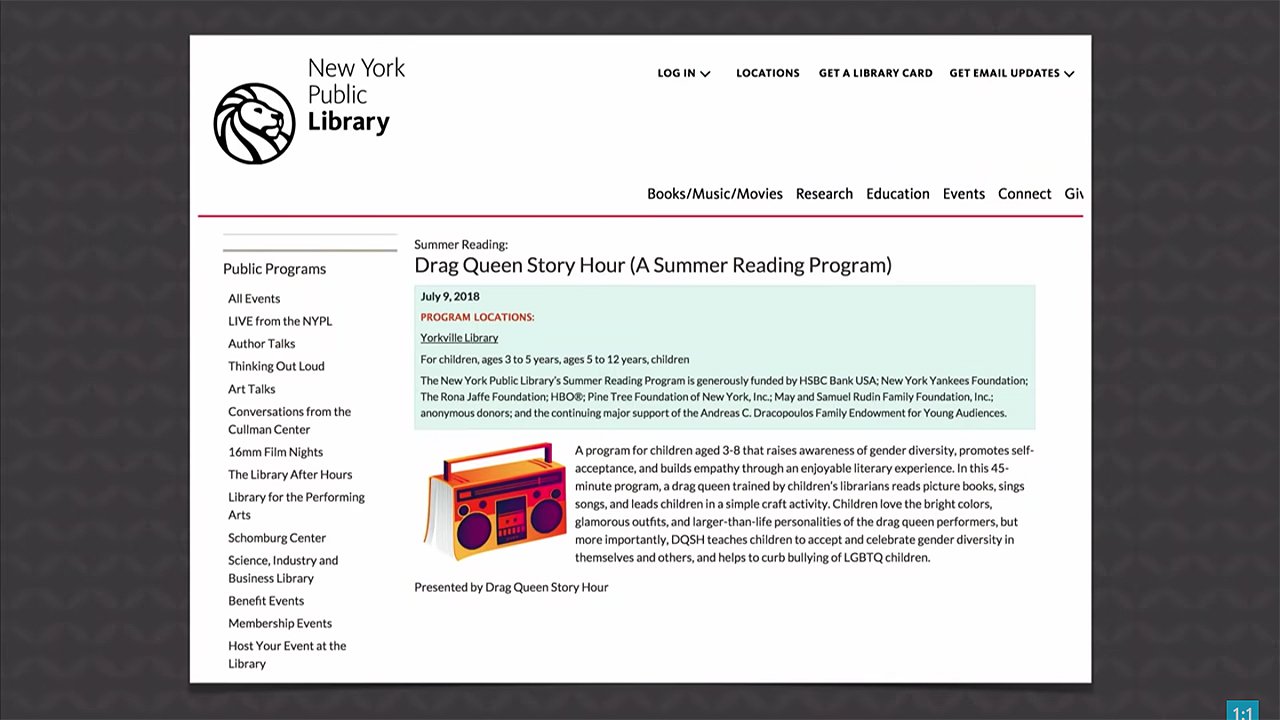 If you think our Western culture can’t get any more perverse than it already is, think again! In a new trend, public libraries in America are hosting “Drag Queen Story Hours,” where drag queens (generally, men who wear feminine clothing or makeup to entertain people) come and read books, sing songs, and do crafts with children in the library. The Yorkville Library, part of the New York Public Library network, recently featured one such story hour, advertising it as an event for children aged 3–8.

This short video shows a drag queen during one of these story hours:

Now, drag queens are nothing new. But many people may not realize that their tax dollars are being used to promote this lifestyle to children. Imagine what would happen if your tax dollars were used in such a library so someone could read the Bible to children!

As our culture drifts further from a biblical worldview, it will continue to become more perverse as everyone does what’s right in their eyes (Judges 21:25). And when humanity makes its own rules, apart from God’s Word, we get a time like the generation before the flood of Noah where “every intention of the thoughts of his heart was only evil continually” (Genesis 6:5). I believe this is where our culture is headed because God turns a nation that has rejected him over to their own depraved natures (Romans 1). And sadly, we’re increasingly seeing that depravity exhibited before our eyes in this culture.

People, especially parents, need to be aware that things like these drag queen story hours are taking place. We need to equip our children, who may have friends who have attended such events, to think biblically about gender and marriage. (God created us male and female and ordained marriage as between one man and one woman. See Genesis 1:27 and 2:24.) The culture is out to capture the hearts and minds of our children and normalize sinful behavior at earlier and earlier ages. We need to be proactive about teaching them what God’s Word says and how to graciously defend what they believe.

I discussed this item yesterday on Answers News with regular cohost Dr. Georgia Purdom and frequent guest Avery Foley, an AiG staff writer. Answers News is our twice-weekly news program filmed live before a studio audience here at the Creation Museum and broadcast on my Facebook page and the Answers in Genesis Facebook page. We also discussed the following intriguing topics: