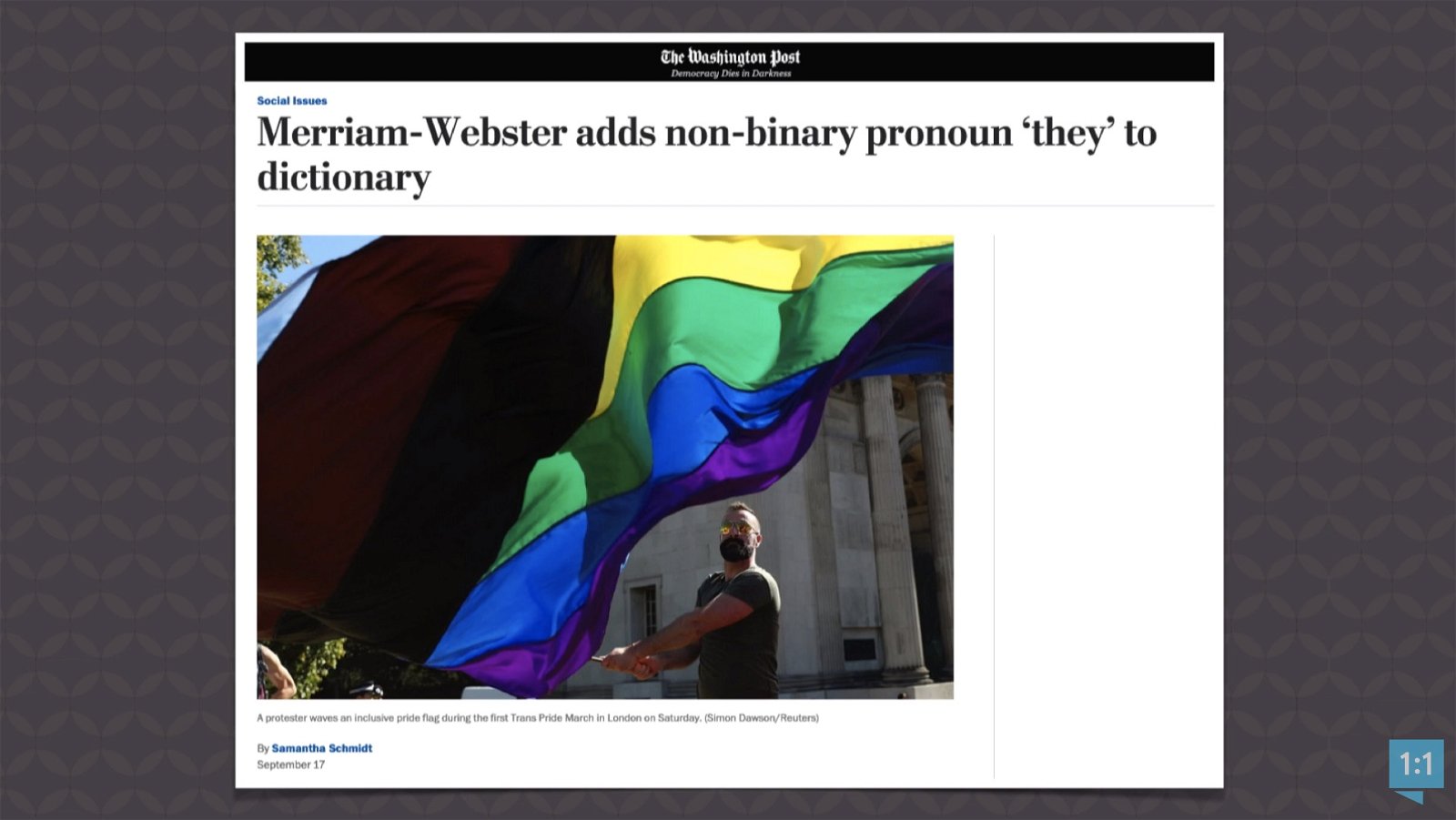 The well-known dictionary Merriam-Webster recently announced it is adding a new definition for the pronoun “they.” This new definition reads that “they” can be “used to refer to a single person whose gender identity is nonbinary.” This is described as “a significant recognition that the new pronouns have reached the mainstream.”

Even the words used to define the new alternative usage of “they” by Merriam-Webster demonstrate how much our language has changed.

But it’s not just this new usage of the old pronoun that has “reached the mainstream.” Even the words used to define the new alternative usage of “they” by Merriam-Webster demonstrate how much our language has changed. Just a few years ago, the phrases “gender identity” and “nonbinary” would have made little sense to the average American. But with the sweeping transgender revolution, these words are frequently seen in news headlines, on social media, and even in conversation.

Ultimately, language tells us a great deal about the culture. This move by Merriam-Webster is another sign of how the culture is changing. This nonbinary pronoun is so mainstream now, the Merriam-Webster editors felt the need to include the alternate usage in their dictionary (along with about 530 other new words)—and that tells us where our culture is headed.

Many in our culture are trying to destroy the God-given distinction of male and female. Scripture is clear—God has created us male and female (Genesis 1:27). He created both in his image, equal before him, but distinct and different. Men cannot become women, and women cannot become men (something that is not only biblical, but an obvious fact from biology). There is no such thing as nonbinary. People may say they are nonbinary—but they are either male and female. And they need to live according to God’s design, not their rebellious, sinful desires.

Language may change, reflecting a changing culture, but God’s Word never changes. It is the same yesterday, today, and forever, and the truth found within the Bible will outlive the Merriam-Webster dictionary and any and all cultural trends. Instead of allowing culture to influence our thinking (and our use of language!), we need to allow God’s Word to shape our thinking.

So this new definition of “they” is one I certainly won’t be using!

This item was discussed yesterday on Answers News with cohosts Avery Foley, Dr. Gabriela Haynes, and Bodie Hodge. Answers News is our weekly news program filmed live before a studio audience here at the Creation Museum and broadcast on my Facebook page and the Answers in Genesis Facebook page. We also covered the following topics:

Watch the entire episode of Answers News for September 23, 2019.

Previous Article Join Us Every Thursday at 12 for Creation Museum Live! Next Article National Bible Bee Competition Finals at the Ark Encounter