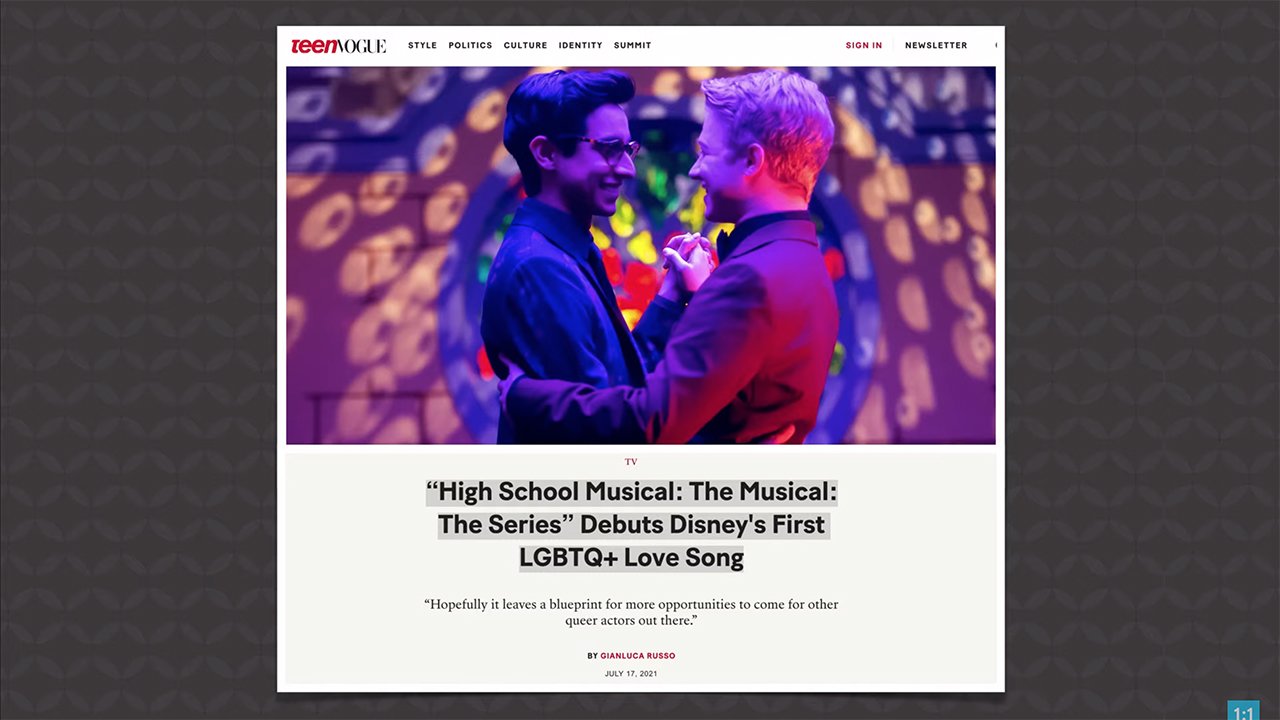 The LGBT activists are out to capture your kids! A recent study found that, between 2017 and 2019 alone, LGBTQ+ characters in children’s programming saw a 222% increase for a total of 259 such characters aimed at influencing children. And as more studios appoint openly LGBT showrunners and give them the green light to include such characters in their shows, this is only going to grow exponentially. Take, for example, a new development from Disney+.

In a recent episode of a popular show on their streaming platform, Disney debuted their first homosexual love song. Two young men in High School Musical: The Musical: The Series (HSMTMTS) affirm their love for one another in this new song titled “The Transformation.” Teen Vogue shares:

The normalization of Seb and Carlos’ romance sets it apart from other queer relationships on screen in which sexuality is a burden or hurdle to overcome, rather than just another trait of one’s personality. “We're not trying to achieve something crazy,” Frankie adds. “We just want love and romance just like everybody else. The song is about acceptance between the two, but then also, how they're being presented to the world.”

Disney wants to show teens and children that homosexual romances are totally normal to help ensure the next generation doesn’t bat an eyelash at these immoral relationships. It’s part of desensitizing children to sin—and encouraging them to engage in that sin themselves. How tragic! In the name of “love,” “romance,” and “acceptance,” Disney is encouraging children into sin—and sin isn’t loving, it isn’t romantic, and accepting. It only leads to more pain and brokenness. It’s all a part of the devil’s attack on the family and an undermining of God’s Word and the Christian faith.

Disney wants to show teens and children that homosexual romances are totally normal to help ensure the next generation doesn’t bat an eyelash at these immoral relationships.

The two actors (who are apparently dating off set) say they want children to know “that they are never, even in their darkest moments, alone.” And that can be true—but not in the way that they mean it. Children (and adults) need to be directed, not towards their sin and those who will come alongside and celebrate their sin with them, but towards Christ. Christ is the one who paid the penalty for our sin and it is the Holy Spirit who gives us a new power to say “no” to sin and live in holiness. And he promises that he will never leave us or forsake us (Hebrews 13:5b).

I encourage you to consider supporting a streaming platform that points children and their families towards Christ and the truth of his Word. On Answers TV you can find over 3,000 programs—including adventure shows, nature programs, hands-on science shows, and children’s programming—with more content coming all the time. At only $4.99 a month, or $39.99 for a year (that’s just over $3 a month), it’s very affordable and it will encourage and edify your family.

This item was discussed today on Answers News with cohosts Roger Patterson and Dr. Gabriela Haynes. Answers News is our twice-weekly news program filmed here at the Creation Museum and broadcast on my Facebook page and the Answers in Genesis Facebook page. We also covered the following topics: